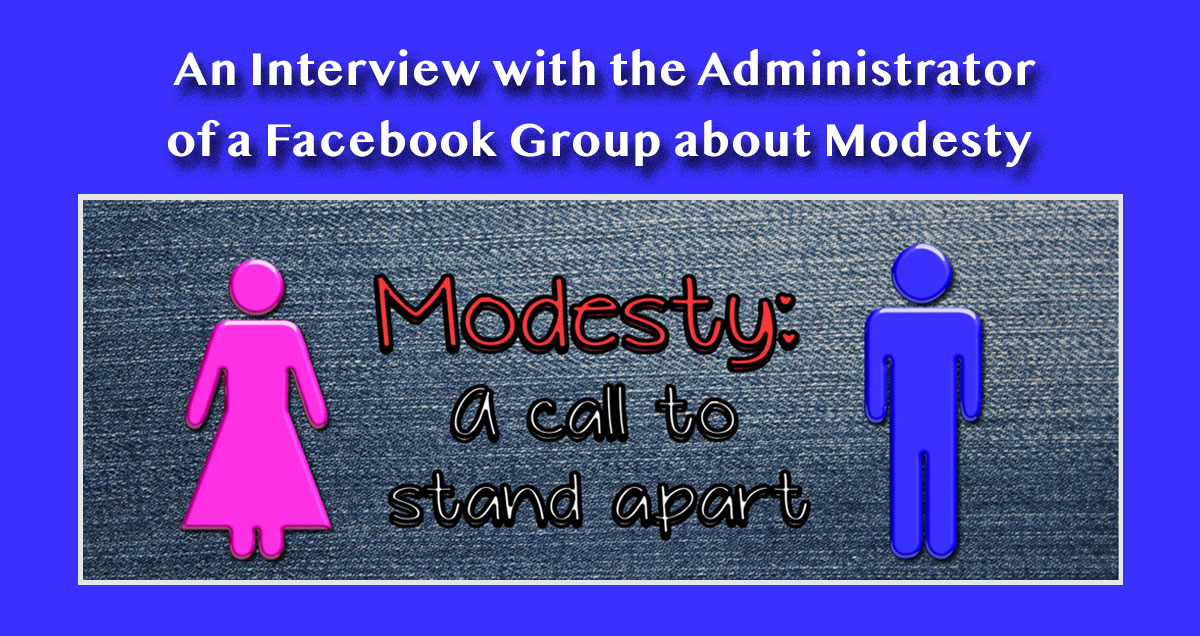 Recently we noticed a Facebook group, administered by two Seventh-day Adventist men, called “Modesty: A Call to Stand Apart,” that had grown to over 3,000 followers. We asked Wyatt Allen, one of the originators of the group, to talk about it. Wyatt is an evangelist for Amazing Facts.

Why did you feel a need to create a group to talk about modesty?

Like many in the group, my wife and I had questions about modesty and what it means for our family. We found some interesting websites, but none that allowed for a conversation on the subject. So, I had the idea to create our own Facebook group with the hopes of sharing and learning from others interested in modesty, and who wanted to grow in this character trait. I teamed up with Jerrod Boling, a like-minded brother in Christ, to help as an administrator because of the amazing response and growth this group has been experiencing.

How do you define modesty?

We ask this question to all those applying to join the group and we have gotten a myriad of responses, all of them revealing that there is not one single settled definition. Personally, I consider modesty to be humility of life and dress. Simply, we are modest when we get the attention off ourselves and onto our Creator. The opposite of modesty would be a form of pride, or a “look at me” attitude. Modesty and pride are both issues of the heart and they will always show up in how we live and dress. “The outside appearance is an index to the heart” (Ellen G. White, Testimonies for the Church, Vol 1, 136).

This group was started by men, and many of the participants are men, yet most discussions about modesty seem to focus on women. Why do you think that is?

Most would agree that modesty is an issue that is affects both men and women, and there have been several posts about the need for men to live more modestly (think expensive suits and fancy bling). However, you are correct, most of the discussion about modesty falls on women. This is true even in the Bible (1 Timothy 2:9-10, 1 Peter 3:1-6). I’m glad men, especially the young ones, are learning about biblical principles of dress, because for the most part, men are largely to blame for the immodest fashions in the world, as they demand more skin and less clothes. And I’m glad for all the women, especially the young ones in our group, that are asking honest questions about how they can dress to God’s glory. It appears that the enemy of souls, through the world, would especially attack women in this area. Thus, the focus. We have also noticed that Facebook analytics reports that 7 of the top 10 contributors and almost 65% of the group membership are women.

Some would say that men will raise questions about modesty in order to put the responsibility for controlling men’s sexual desires onto women. How do you answer that?

Indeed, it is easier to blame immodest women than to own up our own faults as men, and, regretfully, this does happen. But as we have seen this question discussed by both men and women in this Facebook group, the typical consensus is that men are responsible for the sin of lustfully looking (Matthew 5:28), while women are responsible for looking lustful. Christians are told not to provoke one another to sin or lay stumbling blocks in their paths. (Galatians 5:26, Romans 14:21). Not every guy who is struggling with lust is a pervert. Some honestly want to stay pure and live holy for the Lord, despite the typical male temptation to “look”. Most of us teach that men who try to shift the blame for their lust problem onto women will have no excuse in the judgment. Thankfully, our group hasn’t seen that attitude, and frankly, would not be tolerated.

Most people would agree that there’s a great deal of provocative dress in the modern world. Where do you draw the line between modesty, and erasing all marks of uniqueness or difference? Do you fear that modesty restrictions can go too far?

This is a very subjective question, but a good question, nevertheless. That is why we have the group, to take questions like this and discuss it in the spirit of Christ, without judgment. Everyone in the group would draw the line in a different place. We are all learning and growing. Unfortunately, every reform (including dress reform) has it fanatics. And sometimes they slip into the group and stir up strife. The principle that guides the admins of the group is from the pen of inspiration: “There is no need to make the dress question the main point of your religion. There is something richer to speak of. Talk of Christ, and when the heart is converted everything that is out of harmony with the Word of God will drop off” (Evangelism, 272). We allow many points of view and disagreements, but never condemnation and extremism.

Why do these discussions of modesty, do you think, slip into questions of women’s participation in worship, preaching and teaching? Do modesty considerations in general prevent women from being up in front, teaching and preaching?

Most participants in the group that speak favorably about the virtue of modesty see worldliness creeping more and more into the church. The questions about the propriety of women’s participation in certain activities in the church likely come from this concern about compromise. You will notice that most of these questions are raised, not by men, but by women themselves. And though these questions come up, the response is overwhelming in favor of women having an important role in public ministry. The question about how modesty is related may trace its origin to comments made by Ellen White in Testimonies for the Church, Vol. 1, page 241, where she speaks at length about worldly dress and the women’s rights movement of her day. This is a great question to post to the group and see what responses come.

What is desired outcome for the group and its participants?

I designed this group to be primarily a support group for those who want to learn about and live modestly. We keep the group and conversations open so seekers, and onlookers can read and be inspired, and maybe join and contribute. I personally have learned so much. I’ve been corrected. And even some of my more conservative views have been softened. Recently a teenager posted about her struggle to be modest in an immodest world. The outpouring of support was overwhelming. That is what this group is meant to do: to help each other grow closer to Jesus and His word. As a sideline, roughly 20% of our members are not Adventist. We have found that there are Christians of other faiths who share the value of modesty and have connected with us. And as such this forum has been a great witnessing tool. My ultimate prayer is that there will be people in heaven because of this group. Or rather, because of the members of this group who love and live for Jesus.