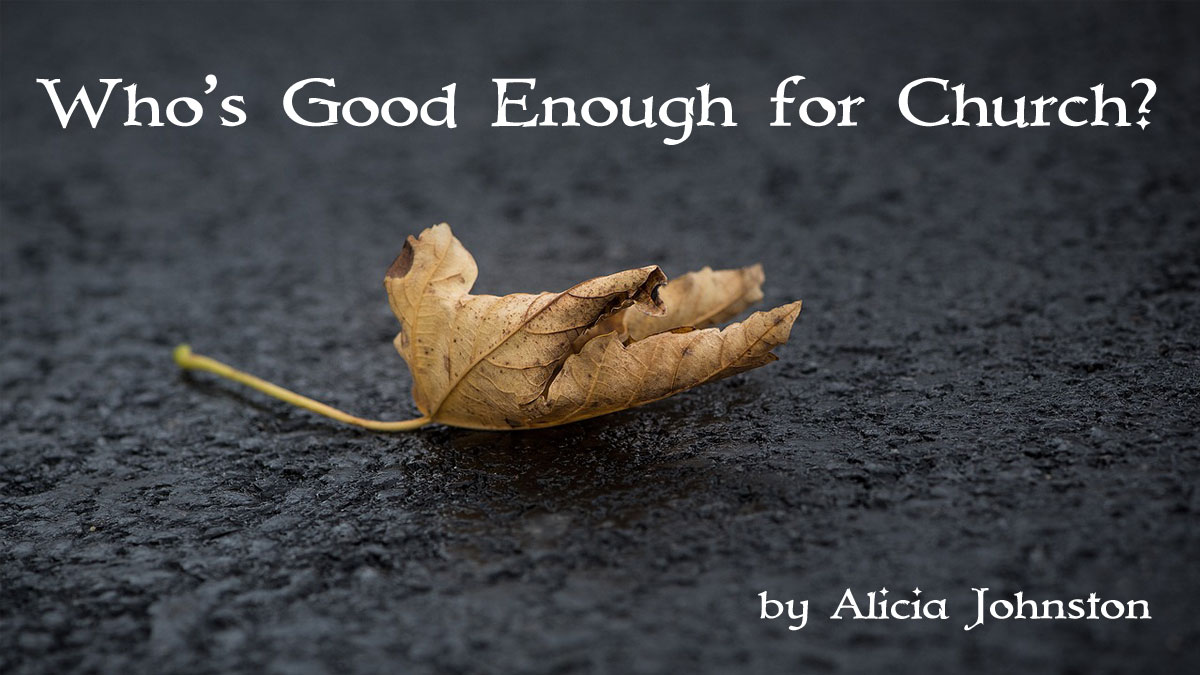 “I always used to look down on people who got divorced.” It was an offhanded comment my friend made one day. She’s such a kind person. I didn’t imagine her looking down on anyone, but I guess we all have our little private judgements.

“Oh yeah?” I waited for the punchline.

She laughed, “Then I got divorced. I just never thought it could happen to me.”

Failure breeds compassion. Some people would be a lot easier to tolerate if they had an unexpected moral failing to knock the condescension down a notch or so. It always works for me, and failure has probably made me a much more enjoyable human being. My family can attest to this.

Failure breeds compassion. Some people would be a lot easier to tolerate if they had an unexpected moral failing to knock the condescension down a notch or so.

Our churches are meant to be safe places. This is something we are taught. We should be accepting and loving of others no matter what. But we’re taught a lot of other things too. We’re taught not to have extramarital sex, not to use drugs, not to get divorced, not to break the Sabbath, not to miss church too often, and a whole host of additional behaviors depending on which flavor of Adventism you live in. Things can get pretty specific.

Our communities are not based only on acceptance and openness with each other, but on social expectations of behavior. These communities—whether churches, social groups, or specific ministries and conferences—develop cultures and standards about what is and isn’t acceptable behavior.

Within that environment, it’s so easy to begin looking down on those who break the social rules. Even kind people like my friend end up doing it. Too often we have a line of acceptability, a point at which forgiveness is begrudging and our private judgements will remain forever fixed with our opinion of the offender.

This isn’t something that happens in churches only. It even happens in the prison system. Prisons are dangerous places for everyone, but especially for one particular kind of prisoner: pedophiles. Convicts beat up pedophiles. Don’t get confused about what I’m saying. I’m not defending people who sexually assault children. I’ve seen the devastation they cause, and I’m the first to do something about it if I think something might be happening. What I am doing is pointing out that in the prison system the ones bullying pedophiles may be murderers, they may have sold drugs to eight-year-olds, they may have initiated 12-year-olds or younger into gangs and even run prostitution rings with underage children, but they see a pedophile and say that person has crossed the line and I have not. They feel justified in looking down on these people. Perhaps they even feel a bit better about the things they have done. There is a temptation to look down on someone else instead of being honest about our own failures and reforming.

Understandably, everyone want to look in the mirror and see a good person. So our failures make us uncomfortable. In the presence of our own failures, we seek others with worse failures. These are the unholy ones whose despicable behavior has crossed the line of acceptability. They are now in a totally different class from ourselves. We shake our heads. We embrace condescension. We know we would never do such a thing.

But sometime, for some of us, we find ourselves on the wrong side of the line. My friend divorced her husband after years of looking down on other people for getting divorced. What can we do in this situation? We either move the line, or we abandon it altogether. Moving the line necessitates new levels of judgement at the failures of others to restore a sense of our own acceptability after such a fall. But abandoning it altogether? What does that look like?

Holiness, we have believed, is found in personal ethical purity, but what if holiness is found in grace, the free gift of God? Biblical Christianity is so radical in teaching that salvation is found in God that there is no line of acceptability. There are no behaviors and no actions outside of the realm of what can be forgiven. Not for me, and not for anyone else. There is no condescension and no judgement remaining for those who are in Christ. This is radical not only in that it allows all people to be redeemed, but that it redefines what it means to be accepted in Christian community.

Ethical actions should be drawn from the well of love, gratitude, and passion for the Kingdom of God. Doing the right thing is rooted in a sense of our common humanity before the God that loves and saves his creation. Resorting to social pressure and lines of acceptability is the recourse we turn to in absence of experiencing for ourselves the joy of knowing the line has been thrown away, and that because of this there is nothing we can do to make ourselves unacceptable to God. Wouldn’t it be something if our churches were as filled with Grace as God is? Wouldn’t it be something if we cared more about the humanity and dignity of all people than we did about the behavior of all people?

I’m not playing a word game here. Standards are behaviors that we use to determine who is in and who is out. Values relate to what we believe is important.

Another friend recently told me she stopped going to church. I saw her brace herself for my judgement right before she said it. I wondered if she’d been avoiding me because she knew I’d ask how church is going. I want to be the kind of person that no one has to hide from. Instead of expecting judgement, I want my friends to expect interest, concern, love, and someone who cares about things that are important.

And when someone falls, it gives us no sense of comfort at our own ability to stand. Jesus’ biggest problem was with those who never violated the community standards for acceptable behavior. His biggest problem was with those who enforced the standards and seemed to meet them flawlessly. Yet he tirelessly taught the importance of love, of sacrificing for others, and of maintaining a heart of peace towards those who would cause us pain. I can only believe it’s because Jesus came not to determine who was acceptable, but to affirm the humanity and dignity of all people, regardless of their failures.

When asked what the greatest commandment was, Jesus didn’t give a rule to be kept, a standard or line that could be used to determine who is in and who is out. Instead he gave values to be embraced, values that would give meaning to all the behaviors in the Law and the Prophets without giving our arrogant hearts reason to judge one another:

Alicia Johnston serves the Arizona Conference of Seventh-day Adventists as the pastor of Foothills Community Church, (foothillsaz.org). She is an obsessive reader, a poor guitar player, and a lover of sunshine.