To Live by the Sword 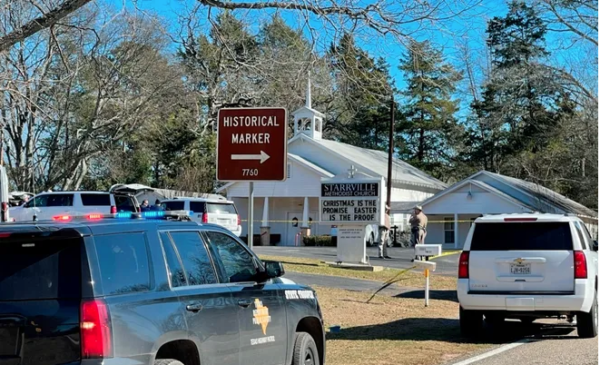 Pastor Mark McWilliams was killed and 2 others injured in a shooting Sunday in an east Texas church, about 100 miles from Dallas, after McWilliams confronted Mytrez Woolen, who had hidden from police in the church overnight.

McWilliams, pastor of Starrville Methodist Church, discovered Woolen hiding in a bathroom. The Smith County sheriff would not comment on why the man was being sought.

McWilliams drew a gun and ordered Woolen to lie down. Woolen, 21, was considerably younger than McWilliams, 62. In the ensuing fracas, Woolen grabbed the gun and began shooting. McWilliams was killed, another person was injured by gunfire, and a third injured in a fall.

Woolen stole McWilliams’ vehicle and was subsequently arrested. He was hospitalized with gunshot wounds and is now in Smith County Jail on bail. He will likely face a capital murder charge.

One might ask why McWilliams had a gun in the first place. Why is a purported man of peace brandishing a weapon of violence?

And second, why was he so eager to allow justice (as he perceived it) to triumph mercy? Did he know Woolen was a fugitive? Would it have mattered?

Did he bother to inquire why Woolen sought sanctuary in the church before he drew his weapon?

This did not end well – for several people, most notably McWilliams and Woolen.  It seems to me it did not have to be that way.

In his zeal to protect his Master in the garden of Gethsemane, impetuous Peter drew his sword and amputated the right ear of Malchus, servant of the high priest. He was rebuked with these equivalent words: “Those who live by the sword will die by the sword.” And the ear was instantly restored to its former condition.

Whether his experience was the inspiration for what happened, centuries later, when Dutch artist Vincent van Gogh amputated his own ear, may never be known.

Contrast the above situation with what happened in Les Misérables, masterwork of French novelist Victor Hugo. Admittedly fiction, it nonetheless recapitulates life. Great art does that. That’s one reason for its enduring appeal.

The protagonist Jean Valjean, after serving 19 years for stealing a loaf of bread for his sister (whose children were starving), is released on parole. Tired and hungry, he wanders the countryside.  Everywhere he goes he is spurned. The true colors of the townsfolk are revealed. They are not as good people as they might have imagined themselves to be.

Finally taken in by kindly Bishop Myriel of Digne (a town in southeastern France), and offered food, wine and a bed, he rewards Myriel by stealing silver from the rectory. He might have still been living under the law of the whip and the lash, as he likely did during his 19 years of imprisonment. Every man for himself.

Valjean is shortly apprehended by the gendarme. He claims the silver was a gift. The gendarme take Valjean back to the house of the bishop for confirmation.

The bishop is faced with a stark choice. What to do? If he tells the truth – that Valjean stole the silverware – justice would be served. The silverware would be restored to its former place, but Valjean would be returned to prison, likely for the rest of his life.

And Les Misérables would have been much shorter, if at all.

Instead, Myriel, being perhaps one of first practitioners of what some of us now call situation ethics, chooses to be merciful. He says the silverware was indeed a gift. He even brings more to Valjean, saying he had forgotten to take those items with him when he left.

The gendarmes have to let Valjean go.

In passing, the bishop asks Valjean to become a better man. Which does happen, but not immediately.

Sometimes it is that way.

John Newton, captain of a slave ship, despaired for his life during a violent storm at sea. If the Almighty would spare him, he promised to mend his ways. His life was spared and he did go on to become a clergyman and hymn writer, penning one of the most beloved hymns of all time, “Amazing Grace.”

But, unlike the transformation of zealot Saul into the apostle Paul, his change was not immediate.  It took some time.

Time, to my understanding, is an abstract concept to humans and virtually meaningless to the Almighty. He has indicated that a day, to Him, is like a thousand years and a thousand years as a day. It boggles the mind of many of us, whose lives are governed by time. I think perhaps He is in no hurry. His patience, like His love, seems infinite.

Also contrast recent events in Texas with what has transpired in various churches throughout the country. Many congregations have given sanctuary to those whose immigration status may be in doubt, who may be contesting that status, who are being pursued by the law. Those who offer them sanctuary may be at risk for prosecution themselves. But they soldier on, doing what they think is right.

So imagine what might have happened had Pastor McWilliams practiced what he (presumably) preached.

No gun in hand, he encounters Woolen in a bathroom of the church.

“I ain’t a good man. I came in because it was warmer than outside.” He rubs his hands, blows on them.

“Can we do anything for you?” McWilliams keeps his distance.

“I think the law is on their way. Maybe you best be going.”

“I’m not going to tell on you.” Reaches in his pocket, pulls out a wallet. Reaches in.

No one dies that day in the church.

Later, when law enforcement ask McWilliams about Woolen, the pastor says, truthfully, “I don’t know where he is.”

Still later, after Woolen may have been apprehended, perhaps McWilliams visits him in prison. Which is what Matthew 25 is all about.

I cannot say the above scenario would have happened had McWilliams chosen to handle things differently.

But it may have. The headlines might have been different.