Who is Monitoring the Fourth Estate? 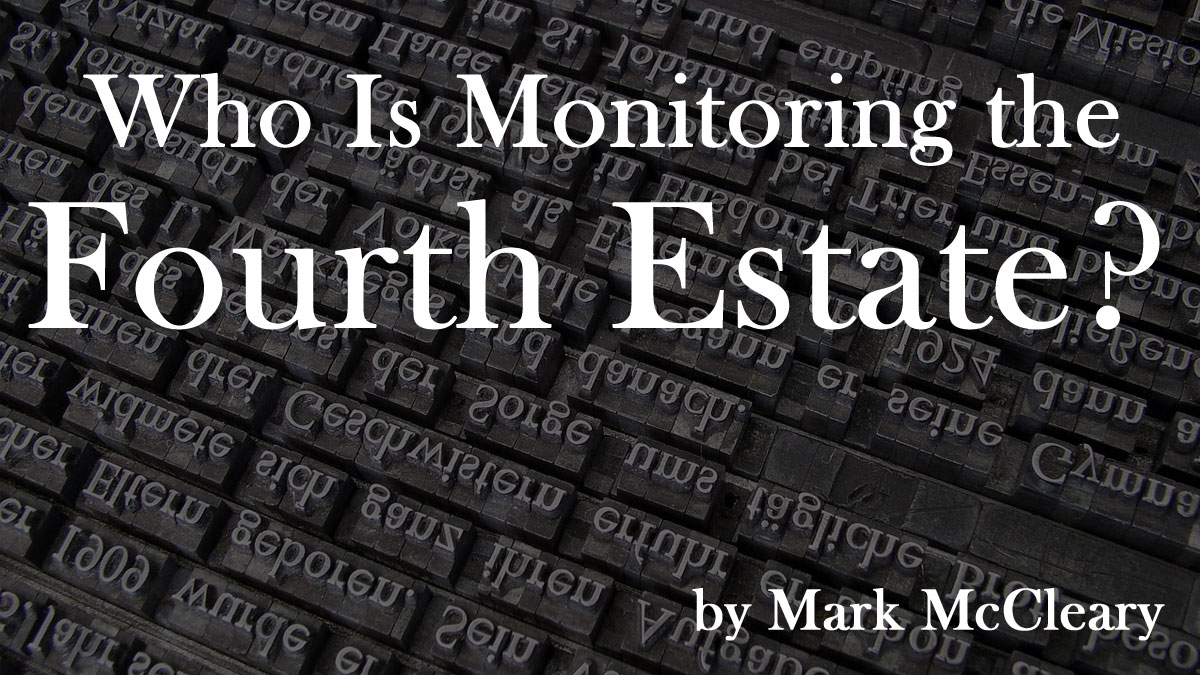 God created us with the ability to think, speak and write. These are ways of communicating our subjective cogitations, and the primary means for expressing ideas that have local and global significance. The above text calls for seeing another person’s thoughts as a revelation of their character.

The dog days of summer are waning as I write this article about receiving the thoughts of others as clues to their character. I find logic in the theory that our words reflect our thoughts and our thoughts influence our decisions which are expressed in behaviors that shape character traits. In this information age, we must monitor the diverse thoughts of pundits concerning persons, places, and things. Followers of Christ, especially, must be constantly alert so as to perceive the message of those in the media. Words do matter.

Our world has become an increasingly frightening and fascinating place. I recall a couple of soap operas from when I was a teenager (I am 65 today): As the World Turns and Days of Our Lives. They portrayed people speaking and acting their thoughts as if there were no accountability nor responsibility for them. What was then just a theater of words and misbehavior has now become reality TV. Are we doomed to be droned by this form of communication?

The enlightenment theorist, Rene Descartes, posited, “I think, therefore I am.” His assertion was revolutionary for his time, suggesting that every individual has the privilege and responsibility to monitor his and another’s thoughts as they are made public, via print or speech. Two-hundred years later, Edmund Burke said “People never give up their liberties but under some delusion.” Descartes’ rationalism and Burke’s political punditry suggest that the Pope, prelates, priests, preachers, prophets, potentates or public media types do not have an ultimate or infallible last word, but individuals must perpetually monitor their own thinking while listening to or reading the thoughts of others.

Let every man be fully persuaded in his own mind (Romans, 14:5).

Edmund Burke, according to Thomas Carlyle, is the originator of the phrase, the Fourth Estate (Shultz, 1998).

England had three other estates in the English parliament: leaders spiritual (the clergy), temporal (the House of Lords), and common (the House of Commons). The French used the same idea to refer to the church, nobility, and townsmen.

As for the Fourth Estate, the Oxford Dictionary defines the phrase as referring to lawyers while the Merriam Webster’s Collegiate Dictionary (10th) defines it as the public press. Of late, the phrase has primarily referred to journalism. It describes a social-political force or quasi-institution of diverse actors that seek to monitor or check on the branches of government.

We must be gatekeepers of our social interactions and communications. As I write, the United States presidential race is being covered by print and electronic media. In addition, the prophetic authority and credibility of Ellen G. White continues to be questioned by some within and from former Adventists. This media scrutiny makes my query more pertinent than ever.

It is ironic to me that the Fourth Estate has been both the promoter and critic of these two controversial figures. I am amazed to see Trump’s shift from a reality-show joke to a legitimate front-runner, and now Republican presidential nominee. I am also amazed that Ellen White is again being charged with changing words, publishing ambiguities, or crafting contextual tensions that mitigate against timeless Biblical principles.

In the case of Trump, it has been difficult to see his repeated falsehoods seemingly accepted as truth. No matter how stupid or insensitive his remarks, he refuses to apologize. According to reporter Jack Shafer, Trump has received an estimated 1.9 billion dollars of free attention from the media (Shafer, p.11). If this estimate is accurate, Trump has done so while being linked to organized crime (via notorious fixer Roy Cohen and by overpaying for Ready-Mix concrete controlled by former Genovese crime family actor, Anthony “Fat Tony” Solerno, and Gambino family chief, Paul Castellano). Trump calls reporters disgusting, constantly belittling the press, even as his life has been chronicled by it. In its coverage of Trump the Fourth Estate has proven that one can win approval by getting more people to like you and fewer to hate you (Schreckinger, p. 22) since monitoring is a subjective and private thing.

In the case of Ellen White, the phrase “the gift of prophecy” has become controversial when used to identify White. These critics suggest that the gift of prophecy should be applied to any biblical voice or writer that fits the scriptural hermeneutic “of line upon line” (Isa. 28: 9, 10), and not White exclusively. Furthermore, these anti-Ellen White pundits suggest that the Adventist interpretation of the phrase is myopic and sectarian. They cross-reference to Jesus’ statement, “Other sheep I have which are not of this fold” (John 10:26, KJV). For them, the gift of prophecy has a general meaning that must be tested by Holy Scripture alone.

Whoever the subject, Trump or White, this calls for careful listening, reading, and reflecting on what is spoken and written. Naiveté and gullibility are not excuses for letting oneself be exploited or misguided, but sad expressions of intellectual lethargy and poor guardianship of the avenues to our soul.

Whatsoever things were written aforetime were written for our learning that we through patience and comfort of the scriptures might have hope (Romans 15:4).

Oscar Wilde aptly said, “We are dominated by journalism.” He made this assertion over a century ago. Today, non-traditional journalistic media has grown via the internet (WikiLeaks, Snowden). The Fourth Estate is pregnant with devious, deceptive, and distortive information. It seems that its role has been more about anticipating the subject’s importance and covering the reported in proportion to their expected importance, over accurate and objective reportage. If the subject is unusual or outrageous, the Fourth Estate is going to write about them.

I offer the following quotes as a bridge to my recommendations about monitoring the Fourth Estate in particular and communication in general:

The only thing necessary for the triumph of evil is for good men to do nothing (Edmund Burke).

The entire social network, formal and informal, will continue until the end of time. It is, therefore, the responsibility of individuals to be and become better monitors of what is spoken or written. The theory of tabula rasa posits that humans are born with a blank slate and develop as they are impressed by external stimuli. On the other hand, recent research in epigenetics suggests there is a hand-me-down factor to knowledge that counters the tabula rasa theory. Ellen White is quoted as exhorting us to “guard well the avenues of our mind” (Messages to Young People, p. 285). Timothy Jennings asserts that “We have power over what we believe and what we believe has power over us.”

I recommend that you stay alert in order to monitor what is worth receiving that fits kingdom values and principles, as well as sound biblical hermeneutics. Remember, the folk who monitor counterfeit money for our government do so by studying the valid in order to detect the false. Ellen White’s library and posthumous publications, as well as daily reports about Trump, are there for individual perusal. I encourage you to bone-up on God’s word so you can be protected from the negative elements of the Fourth Estate (Psalms 119:9-11) and not be idle, but proactive in good doing.

Lastly, I reemphasize that we submit to and practice sound biblical hermeneutics and not be the reflector of other men’s thoughts, oral or written. God has given us two eyes and two ears, but one mouth: we should do twice as much looking and listening as talking (John 7:17; Rev. 22:18,19). The act of monitoring is a social, subjective, and personal matter with eternal ramifications. Do not be exploited by human and spiritual forces that prey on fears without building faith (Ephesians 6:10-17). Let us look and listen to what is honest, just, pure, lovely, and good rather than being manipulated by the distortions of the Fourth Estate. A mind is a terrible thing to waste.

Carlyle, Thomas, (19 May 1840). “Lecture V: The Hero as Man of Letters. Johnson, Rousseau, Burns” On Heroes, Hero-Worship and There in History. Six Lectures. Reported with Emendations and additions (Dent, 1908 ed.) London: James Fraser.