Where the Spirit of the Lord Is

Once upon a time there was a group of workers who were waiting for the master of the estate to come at any time. He had specifically asked all of them to bring in the harvest before he returned. In order to do this it took every man, woman and child.

They were dealing with less than ideal conditions because they were working in the dark of night and they wanted to harvest as much as they could before the master arrived.

The master knew how difficult the task would be and had warned everyone to make sure they didn’t run out of oil. Some of the workers, concerned about a shortage of oil went into town to get more oil to make sure they had plenty. When they got back, they seemed to work twice as fast.

A few men believed the Master had put them in charge over the others. They looked around and saw how fast the workers with new oil were working and decided to limit the use of the good oil to men. It was said that men work faster and can do more heavy lifting so the oil needed to be redistributed.

Some disagreed. Women in particular disagreed because they were all about doing their master’s business. They did not feel they were accountable to the men who wanted to limit their ability to do their job because they believed they answered to the master himself.

Other men agreed with the women and by standing up against those who wished to control, empowered the women to keep working, but as the night grew darker a great conflict ensued.

The men who imagined themselves in charge, firmly believed only men should have access to this oil–after all God created Adam first and Eve was his helper sent to procure the oil so Adam could do his important work. Others said God created both Adam and Eve in his image so neither worker was more important than the other.

While the workers were arguing over who could use the good oil, a terrible storm came up. It was worse than anyone had seen before. A large portion of the crop was still in the fields and they were all heartbroken to see how much they had lost, yet many blamed each other for the losses.

There was still much work to be done, but now it was much harder to work around the hail which had frozen some of the crop. Many were exhausted from the fight and scrambled to salvage what they could, but they were shocked to be told they must give up their oil or they would be arrested and fined their wages. They were given one hour.

They had no more time to waste on vain arguments to soothe men’s egos. The women and men who supported them saw a faint glimpse of light on the horizon and they knew if they could just keep working through the hour, the dawn would soon break and they would no longer need the oil.

The last few minutes they worked with what appeared to be super human effort and it was amazing what they were able to accomplish. Then it happened. Light. Glorious Light such as none of them had ever seen before. The Master had arrived to honor his faithful workers.

The men in charge ran out in front to try to explain to the Master how these women had impeded the work with their insistence that they were equal to the men, but the Master told them to go to the back of the line because in his kingdom whoever is first shall be last and the women who were last would be welcomed first.

Then to everyone who tried to stop another worker, the Master said the most incriminating words, “Away from me, you evil doers, you’ve twisted my words, you’ve esteemed yourselves above others and kept the best seats for yourselves and by doing this, you’ve lost a great part of my precious harvest. You certainly don’t know me–because I never knew you.”

This is only the second part of this wonderful blog post. Read the rest here. 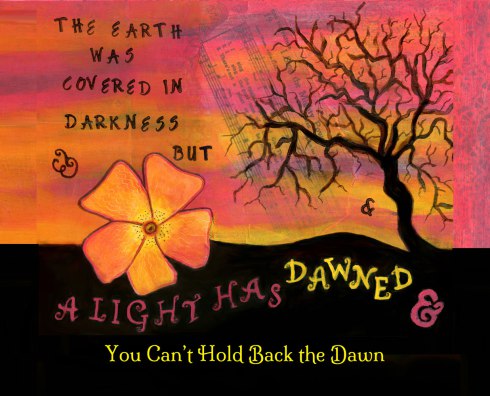