Where Is a Woman’s Place? 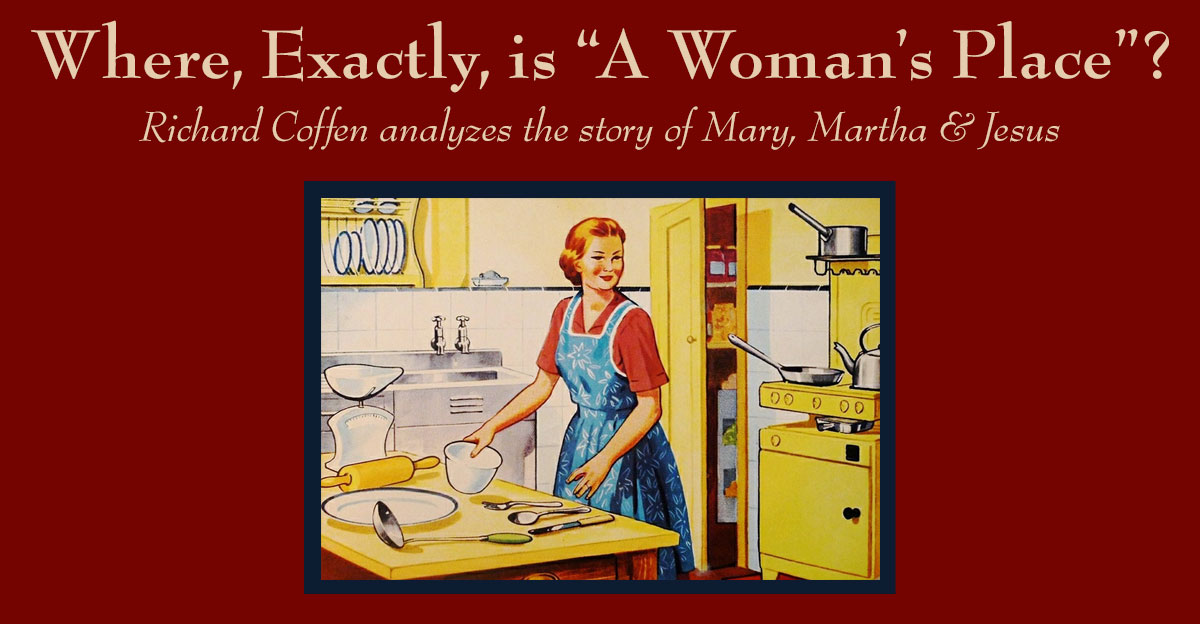 “A woman without a man is like a fish without a bicycle.” Professor Leona Running, grande dame of the seminary, used to wear a shirt bearing that bon mot to classes she taught.

Not all assertions about women have been as lighthearted:

American women must be doing quite well, right? You might think so, but here are the facts:

It came to pass . . . that . . . [Jesus] entered into a certain village: and a certain woman named Martha received him into her house. And she had a sister called Mary, which also sat at Jesus’ feet, and heard his word. But Martha was cumbered about much serving, and came to him, and said, Lord, dost thou not care that my sister hath left me to serve alone? Bid her therefore that she help me. And Jesus answered and said unto her, Martha, Martha, thou art careful and troubled about many things: but one thing is needful: and Mary hath chosen that good part, which shall not be taken away from her (Luke 10:38-42).

Luke’s point encourages clinging to Jesus’ words—by extension, being students of the Word. However, another important point is embedded.

Martha—Scripture says Martha “received . . . [Jesus] into her house.” The word translated “received” connotes welcoming and entertaining. Apparently, Martha owned the house. Jewish women could own property if they were not beholden to a man.[4] Lazarus is absent in this account.

“Martha was cumbered about much serving” (verse 40). The word rendered “cumbered about” meant “pulled in all directions.” The imperfect tense means Martha felt at her wits’ end from the onset and continued to feel swamped.

Martha was doing “much serving.” The Greek uses a form of “deacon” or “servant.” The connotation focuses on the work itself not on relationship of slave to slaveowner. She was cooking a meal for Jesus. Food preparation was time-consuming. Little wonder she was frenetically racing around, preparing a toothsome repast.

Notice that Mary sat next to Jesus’ feet. The verb is a simple (aorist) past tense. She had plopped down prior to this time. Second, Mary listened to Jesus. The tense here is imperfect. She’d begun listening and kept on hearing Jesus, hanging onto his every word.

Later while dining, Jesus would recline on his left side, using his right hand to feed himself. But at this point, the feast wasn’t ready. Consequently, he may have been squatting on a mat on the floor.

Martha Again—Her frantic pace in the kitchen exasperated her. She confronted not her sister but Jesus: “Lord, dost thou not care that my sister hath left me to serve alone?” (verse 40). Martha accused Jesus of insensitivity. She made it clear that she cared about Jesus’ needs—hence her bustling about. But did Jesus care . . . about her?

Martha’s words reveal how flummoxed she’d become. She wanted Jesus to notice that it was she—not Mary—who was laboring like a slave. She blurted out: “My sister hath left me to serve alone.” The simple past tense verb implied that Mary had forsaken or deserted her in the past, leaving her stranded.

Martha wasn’t through. She proceeded to tell Jesus what to do. She commanded: “Bid . . . [Mary] therefore that she help me” (verse 40). Martha had reversed roles, brazenly barking orders to her Lord! She wanted Jesus to command Mary to “help” her. The Greek word meant “to lend a hand” or “to join with me.”

Jesus—Would the Master comply with the orders given him by this servant/slave?

A core value among ancient Near Eastern males was honor. Ascribed honor was “inherited” from family. If father had been honorable, then the son would also be perceived as praiseworthy. Acquired honor was earned because of personal respectable behavior. Men were expected to defend both kinds of honor if challenged. Sociologists have borrowed fencing terms to describe such verbal duals. The person on the offensive presents a “challenge,” and the person on the defensive counters with a “riposte.”

Being an ancient Near Eastern male, Jesus felt constrained to defend his honor, especially in the face of this challenge by a female. “Martha, Martha, thou art careful and troubled about many things: but one thing is needful: and Mary hath chosen that good part, which shall not be taken away from her” (verses 41, 42).

Jesus called her by name—twice: “Martha, Martha”—a Semitic way of showing emotion. However, he did the opposite of what Martha had demanded! “Thou art careful and troubled about many things.” The word translated “troubled” refers to being disproportionately concerned about something. Martha was giving herself an anxiety attack!

It’s interesting that Jesus designated her work as “many things.” And there were.

Houses had no running water. Early each morning a woman had to walk to the local well, let down a weighted goatskin bucket, hoist back up the overflowing container, pour the water into a huge clay jar, heave the jar of sloshing water onto her shoulder, and carry it home. Repeat.

Most food had to be made from scratch. Flour had to be ground from wheat kernels and sifted. Dough had to be kneaded and baked. Milk had to be kept in a skin bottle so it could turn sour, becoming curds. Vegetables had to be dug up, pared, diced, and prepared. Fruit had to be peeled, chopped, or sliced.

Preparing a meal truly involved “many things.” However, Jesus did not use the word “things.” Instead, he said “many,” perhaps referring to the many recipes Martha was preparing. The narrative is ambiguous.

Jesus finished his riposte: “One thing is needful” (verse 42). He did not say “thing” but simply asserted: “One is necessary.” He may have been telling Martha that one food dish would suffice, not many. Next, Jesus defended Mary, who by now had possibly burst into tears. “Mary hath chosen that good part, which shall not be taken away from her” (verse 42).

There are almost always options we can or must choose between or among. Martha decided to spend her time in the kitchen, working herself into a lather while cooking a toothsome meal for Jesus. Mary chose to stay near Jesus, devouring his words. Both were decent options. On the one hand, Martha concerned herself with physical food. On the other hand, Mary concentrated on spiritual food.

Couldn’t Martha have overheard Jesus’ words? Hardly. She would have been cooking in the courtyard; Jesus and Mary would have been inside. The gospel underscores the primacy of paying attention to the Word. However, more lies beneath the surface. We need to understand ancient Near Eastern Jewish culture if we wish to catch this second point.

Martha was fulfilling the usual female role. Although Jewish women enjoyed more freedoms than did many of their peers,[5] they still lived in a patriarchal society.

Martha, on the one hand, was behaving like a “good” Jewish woman. She knew her place—one increment above a slave. She maintained proper distance between herself and a man. Mary, on the other hand, discarded conventional behavior. She sat at Jesus’ feet, doing behavior expected of a male, not a female. Mary was encroaching on the typical male prerogative—gaining an education in, of all things, spiritual matters. By instructing her, was Jesus turning her into a whore? Maybe, according to Rabbi Eliezer’s later opinion.

Whom did Jesus admonish? Whom did he praise? On the one hand, he chided Martha, who was fulfilling the traditional female role, doing what the “little woman” was expected to do. On the other hand, he lauded Mary, who, breaking with convention, was doing what a man was expected to do. She was studying spiritual matters with a rabbi. She “should” have remained in the kitchen area (normally outside in the courtyard) with Martha—where women cooked and remained while men ate inside.

Mary was an early Gloria Steinem! Jesus extolled this female nonconformist because she’d chosen what was good or right.

So where, exactly, according to this story, is a woman’s place?