Where Did October 22 Come From?

The story has been told so often in Adventist circles around the world that it sometimes seems almost like sacrilege to revisit it: on October 22, 1844, thousands of faithful believers, mainly in the New England states, gathered in hopeful anticipation that the skies would break open and the Lord Jesus Christ himself would descend.

The text about cleansing the sanctuary (Daniel 8:14) would later come to be understood, in light of the symbolism of the day of atonement, as something being done in the heavenly sanctuary—Christ furthering his priestly ministry.

What happened at the disjunction between the initial theory and its later explanation is still known today as the Great Disappointment.

Though it is an oft-told origin story, it deserves an honest review. Most of us are decently familiar with the 2,300-days prophecy of Daniel 8:14 and its termination in 1844. Yet when the movement began no one was discussing the date of October 22. So why did The Great Disappointment happen on that particular day?

Anyone who has read the story of the Millerite movement will know that several dates or ranges of dates had been proposed for Jesus to return. Originally, Miller preached that the end of the world would occur sometime between March 21, 1843, and March 21, 1844.[1] When the original time frame passed, they recalculated for April 18-19, 1844, which also passed uneventfully.[2]

The Millerites relied heavily on an interpretation of the ten virgins of Matthew 25 to say that they were in “tarrying time”—thus excusing the several unfulfilled predictions as God’s delaying his coming. It is at this point in the story that a preacher named Samuel Snow, at a Millerite camp meeting in Exeter, New Hampshire, in August of 1844, presented to the gathered company the date of October 22.

You may have heard that October 22 was chosen because it was the Day of Atonement in 1844, the holiest day according to the Jewish calendar. You may be surprised to learn, then, that Yom Kippur fell on September 22-23 that year.[3] This discrepancy in the story causes understandable concern for some believers,[4] and begs the question of how Snow arrived at the October 22 date.

The methodology Snow used to calculate his prediction is complex, to say the least. At the time it was merely reported that,

Brother Snow remarked with great energy on the time, and displayed much research in his presentation of the evidence which, in his view, points to the tenth day of the seventh month of the Jewish sacred year, as the day of the Lord’s Advent.

Ironically, this report was followed with a cautionary remark: “We should hesitate before we should feel authorized to attempt to ‘make known’ the very day….”[5]

Snow’s own publication of this idea ends with predicting Christ’s return on “the tenth day of the seventh month of the year of jubilee: and that is the present year, 1844.”[6]

The key here is that Snow’s prediction was contingent on how one determined the start of the Jewish calendar year in 1844. The contentious point in Snow’s chronology is his use of the Karaite Jewish calendar.

The Karaites were a sect of Jews who believed that all of the divine instruction was recorded in the Torah, without the additional explanation from the Midrash or Talmud, as prescribed by Rabbinic Judaism. Snow and his supporters said that Karaites determined their calendar in accordance with strict Mosaic law, and determined the new year by the new moon nearest the barley harvest in Palestine, which would mean their calendar started April 19, 1844.[7]

There is evidence that the Karaites themselves had actually stopped utilizing their traditional calendar by this time, and may have begun keeping the festivals in accordance with the Rabbinical calendar. Snow nonetheless relied on the obsolete calendar to generate October 22 as the modern “tenth day of the seventh month.”

Ultimately, whatever the rationale by which Snow determined the October 22 date, it came and went, leaving thousands with shattered hope.

What would eventually become Seventh-day Adventism was birthed in the aftermath of the Great Disappointment. While Adventism has grown far beyond what it originally looked like in the late 1800s, there is still one major thing which ties us to October 22: a “vision” that Hiram Edson had in a cornfield on October 23, 1844.

Hiram Edson’s explanation had a simple yet revolutionary premise for the disheartened Millerites: there was a sanctuary in heaven and, rather than returning to earth for us, Christ had just changed his location in the heavenly sanctuary. In Edson’s own words,

Heaven seemed open to my view, and I saw distinctly and clearly, that instead of our High Priest coming out of the Most Holy of the heavenly sanctuary to come to this earth on the tenth day of the seventh month, at the end of the 2300 days, that he for the first time entered on that day the second apartment of that sanctuary; and that he had a work to perform in the Most Holy before coming to this earth. [8]

In that statement Edson tied the “the tenth day of the seventh month” with Christ’s ministry in the heavenly sanctuary. All subsequent discussions among Adventists on what happened in 1844 have been shaped by that cornfield vision.

The present significance of October 22 differs depending upon whom you talk to in the church. Undoubtedly it is because of the Great Disappointment that October is Adventist History Month. Some may even feel that October 22 is a sort of quasi-holiday unique to Adventism, commemorating a foundational event in our history.

Yet no part of this origin story is safe from scrutiny, and most aspects of it have provoked ongoing discussion. The method by which Snow and his allies arrived at October 22 would nowadays be considered exegetical butchery by even traditional Adventist scholars, which may explain why there has been no robust scholarly effort in Adventism to revive Snow’s predictive methodology. Parables are prescriptive, rather than descriptive, truths, and it would be thought illogical to use them in the manner the seventh-month movement did.

Furthermore, Snow made use of the discredited Ussher chronology, a famous timeline of earth’s history which calculated the Bible chronologies to a level of specificity for which they were never intended. Archbishop James Ussher added up the Old Testament numbers and pronounced that the first day of creation fell at “the entrance of the night preceding the 23rd day of October… the year before Christ 4004″—that is, around 6 pm on 22 October 4004 BC, on October 23! How ideal it seemed to Samuel Snow that this present world would end on October 22 and the new world begin on the 23rd, just as it did originally![9]

Some within Adventism have tried to defend the validity of the Karaite calendar upon which the Millerites used to choose October 22 rather than September 23.[10] Unfortunately for them, there is no solid evidence that any portion of the Jewish community observed Yom Kippur on October 22 that year.

It remains, however, that the most common critique of October 22 is none at all: it has diminished in significance over the years for most Adventists. A Sabbath School quarterly a few years ago discussed 1844 in detail, without defending October 22 at all.

Why we still defend it

A defense of October 22 would probably not be necessary if it were not for Hiram Edson’s claiming Christ transitioned in the heavenly sanctuary that very day. Edson’s experience has undergone scrutiny over the years.[11] The provenance of his written account is disputable—it was written roughly five decades after the fact.

Yet in spite of the famous cornfield story, Edson’s vision was not as instrumental to the development of the doctrine as some might believe.[12] The strongest bulwark for October 22 is that Sister White claimed that God was in the preaching of the seventh-month movement. But while she was clear that God propelled the movement, there is no quotation to say that God provided the precise date in October.

It is important to remember that while the Millerite movement was extraordinarily effective, it was mistaken. We may never know why God permitted thousands of believers to suffer such a soul-crushing disappointment. Furthermore, any effort to devise a biblical reason to cement October 22, 1844, as the definitive day Christ moved in the heavenly sanctuary would be hard-pressed to find crystal-clear support in scripture.

A decline in interest

With every subsequent generation of Adventists there is a decrease in concern over this bit of our history. The lack of reference to October 22 may simply be that 1844 is such a common shorthand for what happened that it seems unnecessary to resurrect the questionable specifics.

But in fact, it is simply not as clear-cut as we would like it to be. Whether Christ moved in the heavenly sanctuary on October 22, September 23, or some other time between 1843-1844 is not relevant. Please remember that the 2,300-days calculation stood on its own merits even before Snow introduced October 22. Miller himself wrote,

I have never fixed on any month, day, or hour…I am not a prophet. I am not sent to prophesy, but to read, believe, and publish what God has inspired the ancient prophets to administer to us, in the prophecies of the Old and New Testaments.[13]

The 2,300-days prophecy still terminates around 1843-44 according to Adventist calculations. As for what happens in the heavenly sanctuary, it has scriptural support to stand on its own. Both skeptics and believers who feel their faith is contingent on irrefutable accuracy of the date of October 22 would probably also argue about whether Christ cleansed two or one demoniac, (Matthew 8:28-34; Mark 5:1-21; Luke 8:26-40)—which is to say again, the precise date isn’t relevant.

Whatever your opinion of October 22 may be—whether it is unquestionably the day on which Christ entered the heavenly holy of holies, or a day on which thousands were deluded into a doomsday movement, it is still a part of history that shaped who we are, and we shouldn’t forget it. 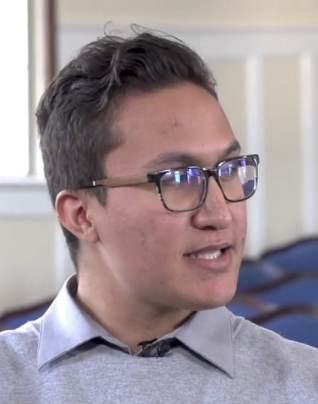 Daniel Golovenko pastors in the Allegheny West conference in Ohio.

Salève Adventist Campus in France Hosts United Nations Experts at the Faith for Rights Program Can we hear an “Amen?”