What Does God Do with Suicides?

For most of my life, I have not only believed that those who commit suicide will not be saved, but also found myself preaching as much. I felt sorry for those individuals, who according to my beliefs, were eternally lost and could never do a thing about their eternal destiny, including poor Judas—the example we often use to illustrate this concept.

Lately I have been re-thinking that idea. It started with a single comment in a Sabbath School class. I don’t recall the exact context of the lesson, but the topic of mental illness came up, and to that, one member of the class quickly stated something to the effect that all mental illness is demon possession. And, they went on further to say that it is a result of being separated from God.

I thought of my late aunt who suffered from paranoid schizophrenia for most of her life. Having experienced many an episode of her condition, I feel sympathy for those people I have known who suffer some level of mental disorder and found it hard to believe their condition is due to our poor spiritual decisions in life, which we have all made at one time or another.

I refused to let the comment slide (something I am doing more often nowadays). I immediately responded that there are many causes of mental illness and to classify all of them as devil possession was just wrong! There I said it: it was wrong! Not only that, I said, but it puts us in a position to judge the spiritual condition of an individual, something that you and I cannot do.

After the class was over, I was approached by another class member who thanked me for my words, because she herself had a family member with mental illness and was convinced that the issue was not devil possession, or a result of a rejection of God.

Where does the idea come from that suicides cannot be saved? And is it right? Is suicide so bad that the Lord forgets, disregards, or completely eliminates those who commit it from the Book of Life? And, what is the actual problem with those who are contemplating taking their own lives, and what are we to do about it?

As a member of the Armed Forces for many years now, I have seen a climb in suicides in our ranks, something that saddens me deeply, and I am concerned about the incredible number of people who actually think it is better to take their own life. We are trained in how to recognize and help those who might be at risk.

To give you an idea of what we are dealing with, here are a few numbers that will alarm you. In 2018, there were 48,344 suicides in the United States, up from 42,773 in 2014. In 2016, the Centers for Disease Control released data showing that the suicide rate in the US hit a 30-year high, and later in June 2018, released further data showing the rate has continued to increase in every US state except Nevada since 1999.

If you count the entire globe, suicides resulted in 828,000 deaths in 2015, an increase from 712,000 deaths in 1990. (Europe has the highest rates of suicide by region in 2015.) Nearly one million people that year believed that being dead is much better than living!

Add to that an estimated 10-20 million non-fatal attempted suicides every year! Do the math: 800,00 deaths, added to about 20 million more who tried to end it all, adds up to… too many lost souls!

Researchers classify death rates from suicide, drug overdoses and alcoholism as ¨deaths of despair.¨ Here is where I return to my initial story. Studies have shown that multiple mental disorders are risk factors for suicide, such as bipolar disorder, autism, schizophrenia, personality disorders, anxiety disorders, and the most common, depression. It is said that some suicides are impulsive acts due to stress, such as financial difficulties, relationship problems such as breakups, or bullying. The list goes on and on.

It is no wonder suicide is a ¨death of despair.¨ Despair is defined as ¨the complete loss or absence of hope.¨ It is synonymous with such phrases as ¨giving up,¨ or ¨lose heart.¨ Sounds to me like these folks need hope, not condemnation. Where did we ever get the idea that suicide is a first-class ticket to eternal death?

I was taught that suicide was an eternal death sentence because it breaks the sixth commandment, which says ¨Thou shalt not kill¨ (Exodus 20:13). So, if you commit suicide and therefore break the sixth commandment, and you can´t repent and ask for forgiveness, you are thereby lost. (Interestingly, the same text was used in my day to tell people they could not serve in the military, unless you were Desmond Doss, a non-combatant.)

Of course, since then we have studied a bit more and have learned that the commandment actually reads, ¨Thou shalt not murder,¨ which is totally a different thing in every way. Murder is not just taking a life, but doing so motivated by a desire to hurt the other individual to the point of planning an event to rid yourself and others of their presence. The intent is to hurt or destroy.

I don’t think that is the same thing that most people who attempt suicide want to do at the moment. Of course, you will add that I don´t know that for sure—and you would be right. But isn’t that the point?

What are we to do with those around us who seem to have lost all hope and don’t think life is worth living?

We should not sit around and feel sorry for these folks because they have lost their souls, something I have stopped doing a long time ago. We have this incredible desire to do God’s job for Him, something we are definitely not qualified to do. And I, for one, am glad of that. We must instead pray that the grace and mercy of our long-suffering heavenly Father will righteously judge what you and I do not know or cannot see. We should pray for the families of the ones lost to suicide, so that the “peace that passeth all understanding¨ (Philippians 4:7) will give them strength.

More importantly, I suggest we work hard to reach those who have not reached that point with the best news that they possibly hear: do not despair, there is someone who cares for you so much that He gave all He had just for you; and you are priceless to Him! Jeremiah 29:11-13 says,

For surely I know the plans I have for you, says the Lord, plans for your welfare and not for harm, to give you a future with hope. Then when you call upon me and come and pray to me, I will hear you. When you search for me, you will find me; if you seek me with all your heart.

How many of those hurting souls would have longed for someone to tell them, ¨Don´t lose hope, God has a future for you because He cares!¨ But they died alone with no one to encourage them, no one to talk to, no one to share a life line. We have such a blessed hope that we need to share because this world is hurting all around.

And believe me, I have seen too much of it! With those staggering numbers I gave you earlier, there’s a chance you may be sitting next to a despairing person at this very moment. They need to see the hope that Jesus can give. They need to hear the words found in Isaiah 41:10 that says, ¨Do not fear for I am with you, do not be afraid for I am your God; I will strengthen you, I will help you, I will uphold you with my victorious right hand.¨

This is the God who has helped me all of these years, even after all the times I have failed Him; the God I am only beginning to know now, and I can’t see Him abandoning a soul in despair who has lost all hope, just when their soul needed Him most! Can you?

I don’t know if Judas´ soul is lost forever or not. That is not my call. I am sure there are many out there who think they are qualified to make that determination (and some may comment as much), but I can´t and I won´t. I have lived that self-righteous life too long already. That is up to our merciful Heavenly Father to decide, because only He can read hearts, and most of all, judge motives.

When Paul wrote, ¨For I am convinced that neither death, nor life, nor angels, nor rulers, nor things present, nor things to come, nor powers, nor height, nor depth, nor anything else in all creation, will be able to separate us from the love of God in Jesus Christ our Lord,¨ I want to believe that includes those just so confused and alone they thought it would be best to be gone, and who committed that last desperate act of suicide. Nothing can separate us from the love of God! That is my sincere belief.

My heart breaks for all the servicemen and women who think it is best if they weren’t around, after sacrificing so much for others. And for the myriads of others in the world who think the same thing. But to believe that their souls are forever lost seems to add insult to injury. That is why I believe God keeps their souls, even as I pray we can reach the ones that have not ended their lives yet and let them know there is hope in Jesus.

After all, that is the good news! 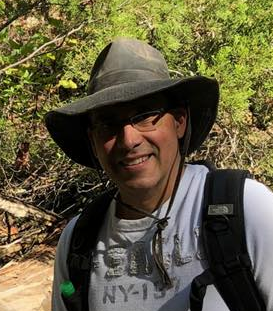 Elliot Pinero was born and raised in the Bronx, NY. He has been a physician for 37 years, and is currently a colonel in the US Air Force, serving as Radiology Medical Director at Lackland AFB, San Antonio, TX.