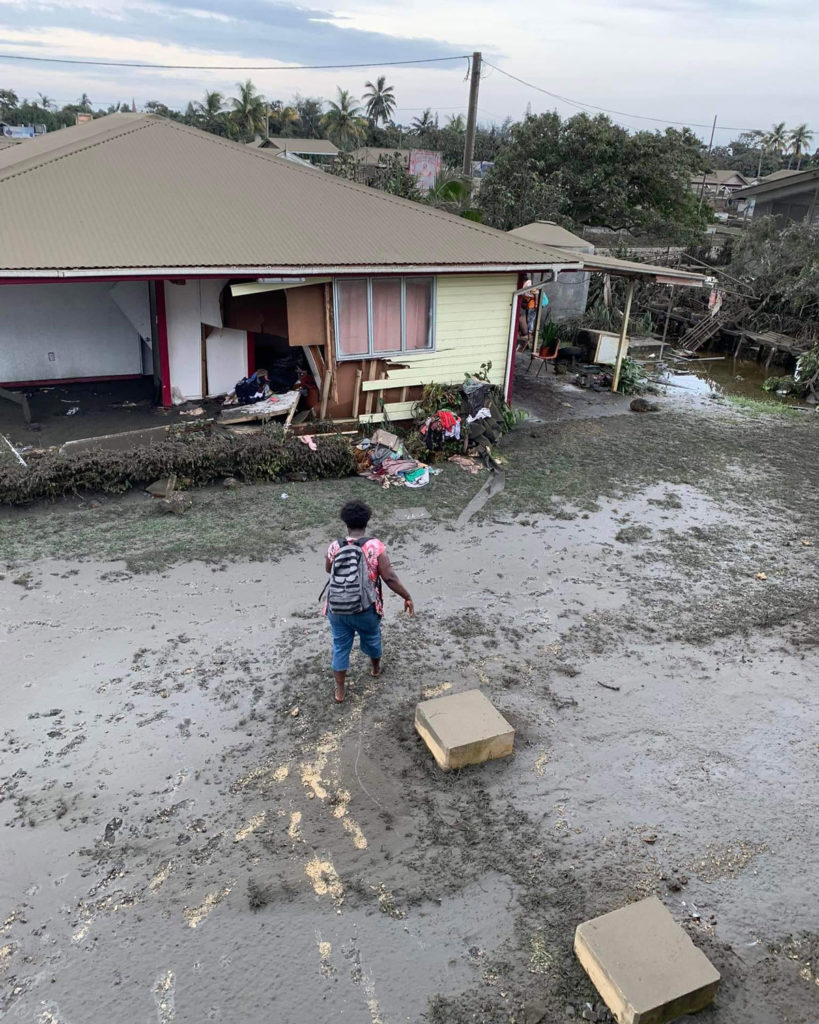 Kalesi Ravouvou and Gwenda Vovo are serving as teachers in Adventist schools in Tonga. Ravouvou is from Fiji, and Vovo is from Solomon Islands. They were at the Tonga Mission compound when the volcano erupted and tsunami wave hit. As the rising waters flooded the compound, they made their escape. Here is their firsthand account of what happened:

It was around Thursday midday on Jan. 13, 2022, that we received a tsunami warning. We were also packing at that time for we were told that we would be moving to the Beulah Adventist College compound. Hence, our stuff was everywhere.

However, the next day, around 10 p.m., we received the cancellation news of the tsunami. So we went to bed that night thinking all was well. The next morning we had plans to visit a church member. We were both looking forward to that visitation.

On Jan. 15, 2022, the day of the Hunga Tonga Hunga-Ha’apai volcano eruption, Tonga Mission President Fanueli Mataele invited us to accompany his family to their home at Lomalinda, which is located inland. However, due to our plans, we wanted to stay and get ready for the visitation.

Around 5 p.m. we decided to have an early dinner before the visit. During our dinner preparation, we heard the first explosion. Since the volcano had already erupted once before, we thought it was just another eruption. However, this time it was louder and was continuously erupting.

Due to our location, a few steps away from the waterfront, we could clearly see the eruption taking place. The smoke that rose from the eruption travelled within seconds across the sky, reaching our home.

We ran out of the house, for we felt the vibration everywhere around us. When we were outside, the volcano erupted again. It exploded three times; the ground was shaking. We could see lightning flashing as the smoke continued to be released from the volcano.

We quickly walked back home due to our fear. As we reached our verandah, the third eruption occurred. This time it was so loud that it hurt our ears and blocked them. We were shouting but we couldn’t hear each other.

We ran inside the house as quickly as we could, grabbed our backpack and ran out to the second floor of the Mission office building. From the balcony of the president’s office, we witnessed the rising sea level. It rose high above the sea wall coming inland, entering the Mission compound.

The huge waves started coming in. The waves were so strong that the gates and fence could not withstand them. The walls broke and fell. At the back of us was a creek and we were surrounded by a fence; the only way out was through the gate that was already broken from the waves where the sea was coming in.

Knowing what would happen after a volcanic eruption—that lava would be flowing, (which did not happen), and the falling of volcanic rocks and heavy ash—we decided to try to escape from where we were but thought to wait for 15 minutes.

Within those 15 minutes, Pastor Fanueli was calling non-stop. He left immediately from his home, taking all possible shortcuts to reach us, as there were many traffic jams in the country. Scared, panicked, we prayed and waited patiently.

But after 15 minutes of witnessing the destruction, we decided to go. We locked arms and we waded sideways in the waters against the strong current until we reached the fence.

The water level was up to our chest. When a strong wave came in, it nearly carried us, but we stood firm on the ground with arms locked, waited for it to pass, and then continued. When we reached the fence, we climbed and ran out of the compound. We continued to quickly wade in the water until we reached a place where the water stopped.

This was happening until the last ray of light. As soon as we stepped out of the water, total darkness covered Tonga.

We ran until we reached one of the main roads. We saw a new double-storey building that was owned by the A3Z broadcasting corporation. As soon as we reached the building the heavy ash started to fall. We just thank God for His protection.

Pastor Fanueli arrived and took us to his home. Sabbath morning came, and Pastor Fanueli asked if we wanted to go and see the Mission office compound. We agreed, and we headed back to the compound.

When we left the compound the previous night, our house was still standing and the Mission office was still intact. Along the way, we saw the destruction. Houses and everything were covered with thick ash. Everything that day was only one colour, the colour of the volcanic ash.

The waterfront was badly destroyed. The footpath that we once took our walk on to and from work was broken and thrown everywhere. The big coral rocks that were used as a seawall were tossed everywhere inland. Everything was completely destroyed.

Upon our arrival at the Mission compound, we were dumbfounded and shocked by what we saw. No words exchanged, only silence was felt.

Our house was destroyed. Our belongings were all destroyed. The Mission office and equipment, books and all other things were destroyed. We have never felt so homesick and discouraged. God had called us to come and serve Him in Tonga, and this is what we got?

After the eruption we have been having sleepless nights—all we can think of is going back home. But we thank God for the love, prayers and support from our families abroad and in Tonga, and that we are safe.

This article first appeared in the Conch Shell, a newsletter produced by the Trans Pacific Union Mission Education Department. It was edited by AT staff.

(Photo: Adventist teacher Gwenda Vovo returns to the house she lived in on the Tonga Mission Compound after the Hunga Tonga Hunga-Ha’apai volcano erupted. Heavy ash and tsunami waves due to the eruption severely damaged the compound. Photo via the Adventist Record.)