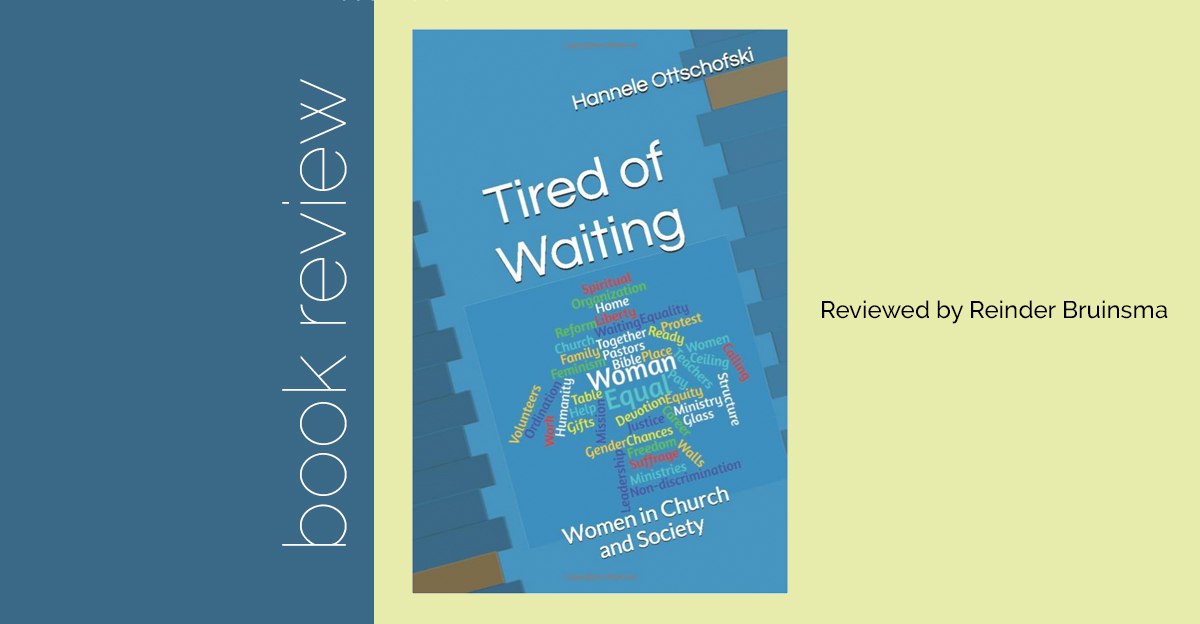 The title of Hannele Ottschofski’s book Tired of Waiting: Women in Church and Society pointedly describes her concern. Ottschofski is a native of Finland, who later moved to Germany and has lived most of her life in an environment where women are more emancipated than in most other countries. (Think of Angela Merkel’s position during the last decade in Germany and of Tarja Halonen, who served from 2000 to 2012 as the president of Finland.) She has longed for the moment that this full emancipation of women would also have become a reality in the Seventh-day Adventist Church. But so far, it has not happened, and with many others she is becoming “tired of waiting”.

Ottschofski’s book is a compilation of essays and personal reflections about women and their role in society and church—in the Seventh-day Adventist Church in particular. It is partly a translation of an earlier book she wrote in German, but for a major part it consists of new—and some very recent—pieces. A few chapters appeared earlier in Adventist Today. She knows what she is talking about, having long been active in the women’s ministry department of the Inter-European Division of the Adventist Church, and through her activities as a speaker, educator, author and editor. In 2019 the Women’s Ministry Department of the General Conferences chose her as one of the women to receive the Woman of the Year Award.

Because of the nature of the book—being a collection of pieces that cover many aspects of the status and role of women—there is no clear structure in the book, but the theme that binds it all together is the impact of women on society at large and on the church, and the ever-ongoing injustice of undervaluing and excluding women in a male-dominated world.

Spread through the book are a number of chapters which deal with biblical and theological issues, as, e.g., the essay about “God’s Plan for Humankind” (12-17) and the chapter on “Headship and Abuse” (144-148). Likewise, spread through the book are pieces about Women’s Rights and feminism, and examples of remarkable women who became strong advocates for full gender equality. Ruth Bader Ginsburg (1922- 2020), who was nominated to the Supreme Court by President Bill Clinton in 1993, rightly deserved a separate chapter (47-49).

Many of the thirty-five short chapters deal with the inequality between men and women in Adventism past and present, which is most painfully manifested in the church’s rejection of the ordination of female pastors. Remarkably, in early Adventism many women (besides Ellen G. White) had a prominent role in many areas, but as time passed this changed. An absolute low point in this process was the ugly legal battle between the Pacific Press and two of its female employees (86).

As expected, special attention is given to the pioneering role of the Finland Union in pushing (so far, without success) for full gender equality in ministry. It is very interesting to note that the Finnish openness to gender equality may be related to the fact that the Finnish language does not have any gendered pronouns like “he” and “she”, and “does not differentiate occupational titles. Whether they are male or female, they are still described by the same word” (64).

The attempts to allow for ordination of women pastors came to a pitiful end at the GC session in 2015 in San Antonio, but attention is also given in this book to some subsequent developments. “For at least 140 years, the Seventh-day Adventist Church has been discussing the question of the ordination of women pastors. Again and again, a decision has been postponed despite thorough study with the excuse: ‘The Church is not yet ready for it’ . . . Women are required to be patient with the brethren who struggle to make room for women. But how long?” There is, Ottschofski argues, a definite relationship between the number of (especially young) people who leave the church and the ordination issue. It should be a great concern to top church leadership that this contributes to a sense among many members that the church is in danger of becoming irrelevant to them (83).

An important essay is the evaluation of feminism. Christians, Ottschofski opines, should not consider feminism as a dirty word. “Standing up for women should be our Christian duty”. Jesus, she claims, may also be considered a feminist (63).

A somewhat different kind of issue is dealt with in the chapter on female genital mutilation. This is no doubt highlighted because of the pioneering role of the Adventist hospital Walfriede in Berlin in assisting victims of this gruesome custom (135-139).

The book is clear in its conclusion: Although we may become “tired of waiting”, we must not give up. Our protest must continue to be heard. “Waiting for things to change while we do nothing seems to me to be futile” (179), the author says. Those who fought for the abolition of slavery and for universal suffrage did ultimately succeed! Things can quite unexpectedly happen, as we are reminded of by the quite sudden fall of the Berlin wall. “Maybe we as Adventists should think of new forms of protest, too. Not just sit back and wait for things to change miraculously. Educate. Advocate. Liberate” (186).

Reinder Bruinsma lives in the Netherlands with his wife, Aafje. He has served the Adventist Church in various assignments in publishing, education and church administration on three continents, his last post before retiring as president of the Netherlands Union. He still maintains a busy schedule of preaching, teaching and writing. His latest book is I HAVE A FUTURE: CHRIST’S RESURRECTION AND MINE.