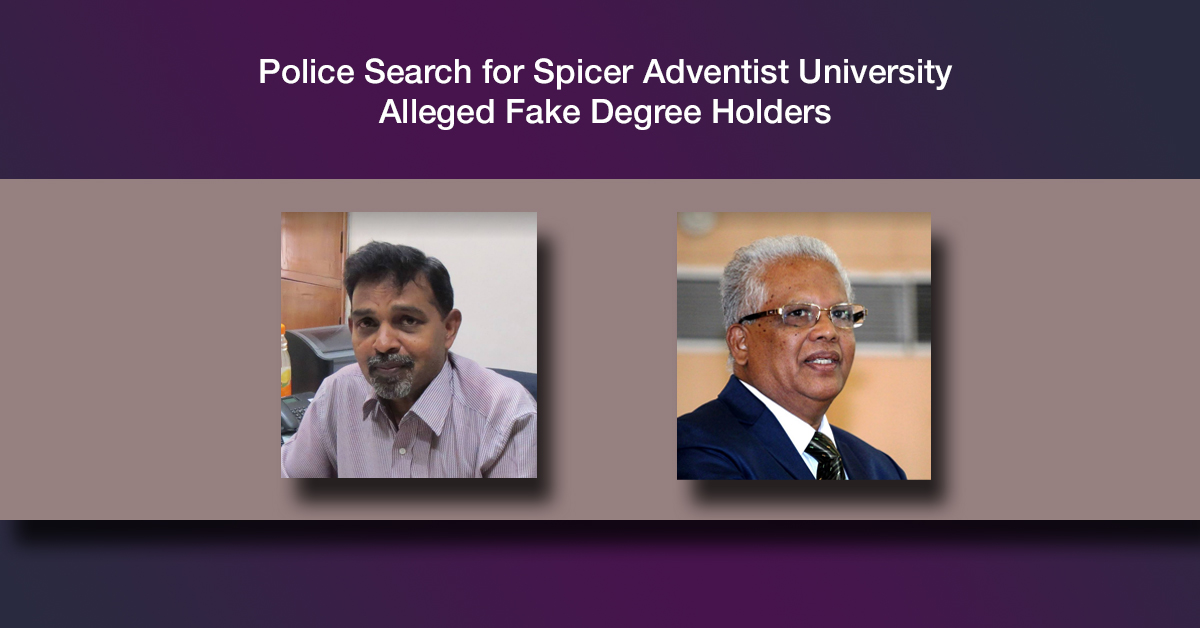 Times of India reported yesterday that two days after the police filed a case against the vice chancellor and two top ranking officials of Spicer Adventist University for allegedly claiming fake Doctor of Philosophy degrees, the police did not know their whereabouts. They were not at the university or at their homes, and their relatives claimed not to know where they were. Assistant Inspector Dhananjay Kapre said he was not yet calling them absconders, but the police had initiated an official search for them.

When the newspaper attempted to call them, Times of India found that the missing men’s phones had been switched off.

Authorities of Manav Bharti University, an institution in the far north of India, said they had not issued doctorate degrees to the university’s vice chancellor Noble Prasad Pilli, chief financial officer Rathnasamy Jeyam, and School of Arts and Social Sciences dean Chacko Paul. Police Assistant Inspector Kapre said, “It is clear the degrees were fake.”

India is in the midst of a country-wide crackdown on corruption.

Activist and Seventh-day Adventist church member Allen Almeyda had filed a complaint against the men in February. The Pune Mirror quotes Almeyda: “I had read about their PhDs in a magazine edited by our church, which informed that their PhDs were completed in Himachal Pradesh. All three are from Pune, which has no dearth of universities, so I began to have doubts about why they all happened to pursue this degree together in the northern state. … When the varsity in Himachal Pradesh denied any such PhDs being conferred, I also enquired about the degrees at Spicer University—but this institute refused to provide information under RTI [Right To Information laws], reasoning that since it falls under the category of a private minority university, it is not entitled to give out such data.” Almeyda also pursued the inquiry through the University Grants Commission and Himachal Pradesh Private Educational Institutions Regulatory Commission. Says Almeyda, “Such an unsavoury falsity raises questions about the education system in India. Private universities are coming up in the city, but the professors running them seem to be resting on fake laurels—this is appalling.”

Senior police inspector Nitin Bhosle is quoted as saying “Almeyda filed a complaint against the professors at the said university having fake PhDs, which was proved in our primary investigation. As per the police commissioner’s instructions, we filed an FIR [First Information Report]. The PhDs in question given by the Manav Bharti University, Himachal Pradesh, are fake. It is a sensitive case and there is a possibility of many others being involved in such a fake certificate racket.”

The Pune Mirror said it was unable to reach a spokesperson at Spicer Adventist University.

This news is sourced from articles in Times of India and the Pune Mirror.
To comment, click here.