Thoughts on the Election and Adventism 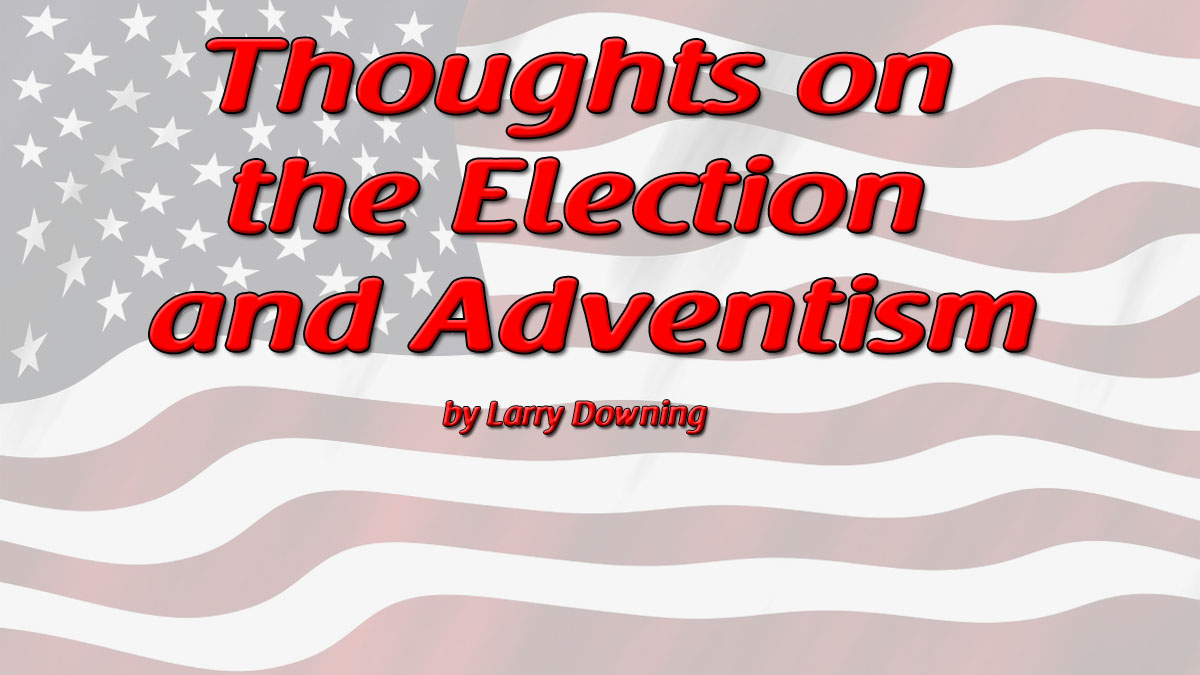 by Larry Downing, November 27, 2016:    Donald Trump, after what some historians categorize as one of the most vitriolic political campaigns in history, is now president-elect of the United States of America. While thousands protest the election, others bask in the longed-for victory of a man they believe will make America great again. I am not here to commend or denounce either stance. What did catch my attention, however, were the charges and counter-charges that became an integral part of the campaign. The gamut ran from accusations that Hillary Clinton is a crook and will be in prison, to sound bites from Trump himself that leave him open to charges that he is a misogynist, a racist, an anti-Muslim and, to top it off, so to speak, some claimed the hair we saw was not his. (A quick snatch at the golden locks quickly dispelled this matter.) For me, an Adventist pastor with more than 40 years in ministry under his belt, a matter more important than whether Trump’s locks are synthetic or natural arises when consideration is given to the forces and factors that led to what is called the greatest upset in American political history. How does one account for an event that befuddled the pundits, gave lie to the political gurus and confounded the egg-heads? And what does this political tidal wave portend when applied to the religious scene, or, to be more explicit, to the world of Adventism?

Is what we see taking place within Adventism and the desire to hold to the perception of what was or a longing to recapture a past that never was, a reflection of the phenomena that transported D. J. Trump from the towers of business to the most powerful political steeple in the world? Can we in the church expect to witness a continued move toward conservatism, isolation, wall-building, and segmentation as part of our modus operandi? It is an ironic truism that an obsession to resist and obstruct thwarts intents to pursue truth wherever it may lead. In the same way, rule and decision though the use of power and authority returns negative dividends. Witness the effect the imposition of power has had in Iraq, Afghanistan, Syria and other Middle Eastern nations. When coercion is imposed on a voluntary organization, such as a church, the outcomes tend to follow other examples where the power of persuasion is replaced by intimidation, threat and force.

A campaign technique employed by president-elect Trump was to emphasize the damage globalization has had on the American work-force and our national economy. In his speeches he called attention to the thousands of jobs that have been outsourced to other countries. He stated time and again that America is given the short end of the stick when it comes to trade agreements. He let America know that it was his opinion that when America recaptures its once preeminent place in the world economy our country will be great again. He does set upon a valid point: We live in a global world and America is not exempt from the globalization phenomena; nor are religious organizations, including our own.

Globalization has had a dramatic and traumatic effect on North American Adventism. We are now but a small segment of the global Adventist population. We wield the large economic stick, but we have lost the vote advantage that once was ours. That is the price we have paid for Adventist globalization. Countries that once submitted to North America’s wishes and expectations can say, “Now it is our turn. We have the votes, votes are power, and we know how to use them!” And this power and its use has been evident in recent actions; in particular, the vote to limit the role of women in our denomination.

Might a legitimate concern exist that the drift to the right (or is it a landslide?) in the political world encapsulated itself within the Adventist culture? For example, in the North American Adventist church, there is a significant segment who hold to and promote the headship heresy, a perspective that thwarts inclusive acceptance and, like the infamous proposed wall, divides and isolates people. Within a religious context, this is a troubling matter. When we isolate or diminish people, we can expect severe negative response from those who value human dignity and expect an organization that claims to hold to a high moral standard to implement what it preaches. When an inconsistency is evident in these matters, little surprise that people, especially the younger among us, vote with their feet. And they have exited in droves. How sad! How unnecessary! How shortsighted!

Reflecting on the above leads to a question: In our attempts to turn back and hold to the past are we a reflection of what drove the outcome in the recent presidential election? Those who study and analyze political behaviors and outcomes posit that fear was a motivating factor that prompted a significant number of people to vote as they did. Does fear play a role in mandates issued from Adventist higher administrative levels that call for unity and adherence to an established set of beliefs? Do these same fears rest within those who support and advance these decrees? What role does fear have in Adventism’s promotion and adherence to what was perceived to have been, but is now perceived to be slipping away? Fear and the threat of change are powerful motivators. Each has had powerful effects on human behavior and has led to irrational conclusions and actions. Scripture has counter to those who fear: fear and love are incompatible. Love casts out fear. Do we Adventists have the grit to counter such fear and move with confidence, satisfaction and joy into God’s future?