This Girl Is Probably Smarter Than You 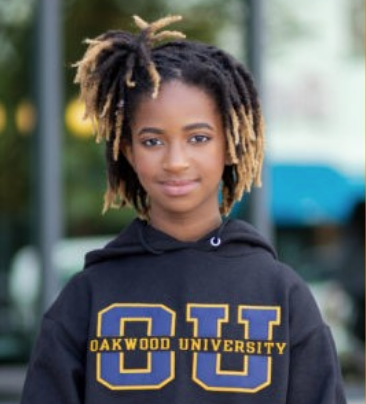 18 October 2021 | Alena Wicker is a Biomedical Sciences major at Oakwood University. She both launched and owns the company The Brown Stem Girl. This past summer she interned for NASA.

Recently, she placed second in the Ebony/Olay HBCU STEM Queens Competition. (HBCU = Historically Black Colleges and Universities; STEM = Science, Technology, Engineering, Mathematics.) The competition highlights “brilliant students in science, technology, engineering and mathematics programs,” according to the competition’s website. Placement was determined by the number of votes each candidate received.

“I have had a passion and love for STEM ever since I was four years old,” said Wicker, in an Oakwood University article.

She launched her own website, the Brown Stem Girl (BSG), to provide a platform for girls ages 12-19 in STEM. She wanted to create opportunities for girls of color in STEM, and encourage girls of color to major and work in STEM careers.

Wicker came up with the entire business plan for BSG on her own and contacted people who could assist with various aspects of its creation, from graphic designers to larger funding requests to public relations, her mother, Daphne McQuarter, said in an interview with Good Morning America (GMA).

“My number one mission in life is to create a platform for girls that look like me in STEM and to give them a seat at my table to have their talents seen and voices heard,” said Wicker in the Oakwood University article.

Her other mission in life appears to be working for NASA, the National Aeronautics and Space Administration, which is a U.S. government agency responsible for science and technology related to air and space, according to its website.

“As a pre-med student, my hope is to become a flight surgeon and work with astronauts for NASA,” said Wicker.

McQuarter, Wicker’s mother, said Wicker has long dreamed of working for the space agency. “She would always say, ‘Mommy, I’m going to work for NASA,'” McQuarter told GMA. “Then she would start saying, ‘I’m going to be the youngest Black girl to ever work for NASA — watch.'”

While Wicker may have always wanted to work at NASA, various news outlets reported that she would be attending Arizona State University in May 2021. However, she is currently attending Oakwood University, a historically Black Seventh-day Adventist institution of higher learning located in Huntsville, Alabama.

Oakwood University is the nation’s 11th-ranked producer of undergraduate black applicants to medical schools, and the only university or HBCU among the top 20 universities in the state of Alabama, according to the Association for American Medical Colleges.

It probably also doesn’t hurt that Oakwood University is in the same city as NASA’s Marshall Space Flight Center, too.

“Alena and Angelica are both cognitively gifted,” said Pollard. “As such, our Oakwood University faculty will challenge them to attain the highest heights of intellectual prowess, while at the same time remembering that socially they are only 12 years old.”

Still, Wicker has proven you’re never too young to reach for the stars.

“It doesn’t matter what your age or what you’re planning to do,” Wicker said in an ABC Eyewitness News report. “Go for it, dream, then accomplish it.”