The Trumpets: Symbolic or Literal? Past or Future? 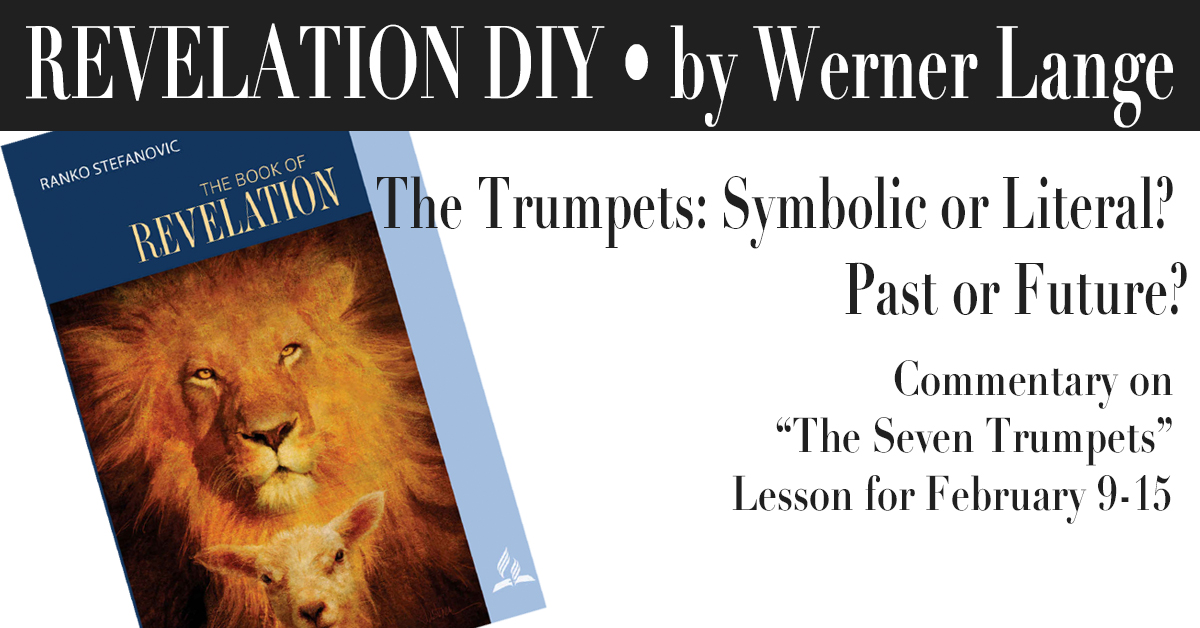 This is commentary for Lesson 7, The Seven Trumpets

The description of the events that take place when the trumpets are sounded (Rev 8-9) is one of the most controversial parts of Revelation—even among Adventist interpreters, who come to very different conclusions about what these events mean. This reveals that there must be something wrong with their methodology of interpretation. However, the application of the principles presented in the elaboration “Revelation DIY 0” (based on the principles by Jon Paulien published in the “Daniel and Revelation Committee” Series, vol. 6) also strikes a path through the jungle of the different interpretations of the trumpet events. We have to look for internal hints, allusions to Old Testament passages and parallels in the Revelation.

First we discover that there is again a 4+2+1 structure with an interlude between the sixth and the seventh trumpet (in like manner as in the sequence of the seven seals in Rev 6:1–8:1). Secondly we find that the first four trumpet events have many verbal and thematic parallels to three of the plagues over Egypt. (I don’t have the space here to show that; please look into my elaboration DIY 7A.) This is a sure allusion that rules out any other alleged OT allusions or parallels! The plagues over Egypt were clearly not symbolic; they were actual events (cf. Ps 105:26-38). Hence we have to draw the conclusion that the events of the first four of the seven trumpets should not be interpreted symbolically either.

This conclusion is confirmed by the parallel to the trumpet events within the Revelation. In the chiastic structure of the Revelation the trumpets are parallel to the seven last plagues in Rev 16. We find numerous parallels between the first four of them: Not only are the targets identical, but partly the effects, too. The first four of the last seven plagues are generally viewed by Adventist interpreters as literal, not symbolical descriptions. Consequently, the first four trumpets must also be understood literally.

The analysis of the fifth and sixth trumpet event shows that these two are to be taken mainly symbolically (as the fifth and sixth plague, too). They describe demonic activities in the time just before the Second Coming of Christ. The star that had fallen from heaven to earth refers to Satan, this identification is confirmed by the key to the abyss he was given and the names of the king over the locusts (Rev 9:1, 11; they mean destroyer).

In Rev 9:4 we find the key to the chronological placement of the trumpet events: They will happen after the sealing of the servants of God with the seal of the living God, as described in chap. 7:2-3. Not only the fifth, sixth and seventh trumpet events are still future, but all seven, since such events, as they are described under the blowing of the first four trumpets, have never happened before in the history of mankind.

The interpretation of the trumpet events is an example of how the traditional and also the more recent Adventist interpretations by Paulien, LaRondelle and Stefanović trivialize these descriptions by locating their fulfillment (mostly) in the past and thus robbing them of their actuality for the future.

The Sabbath School lesson also deals with Rev 10 and 11. In the description of the mighty angel with the opened little scroll (10:1-2) and the two witnesses (11:3-12) is more Adventism than most interpreters recognize. Here we have the decisive foundation for the self-understanding of the SDA church (not only in chapter 14). For more on that see my elaboration Revelation DIY 7B. Both PDFs you can download here.