The No-Thing at the Center of Every-Thing.

Jack’s wife Deanne’s family home, his sister-in-law’s homes, and the Adventist hospital, church community and school that the Dean Hoiland family helped found in Paradise, California, were destroyed or seriously damaged by the unprecedented town-destroying Camp Wildfire disaster. Alaska too has had everything now shaken. When everything is gone, what is left?

Israelite refugees recovering from centuries of slavery had to be schooled to change their world outlook from “be born, learn to survive by energy and cunning, grab what stuff you can when you can, and die as an ancillary in the houses of life’s taskmasters and pharaohs.” They were anthropologically organized into 12 tribes, and geometrically organized into a square encampment three tribes to a side. 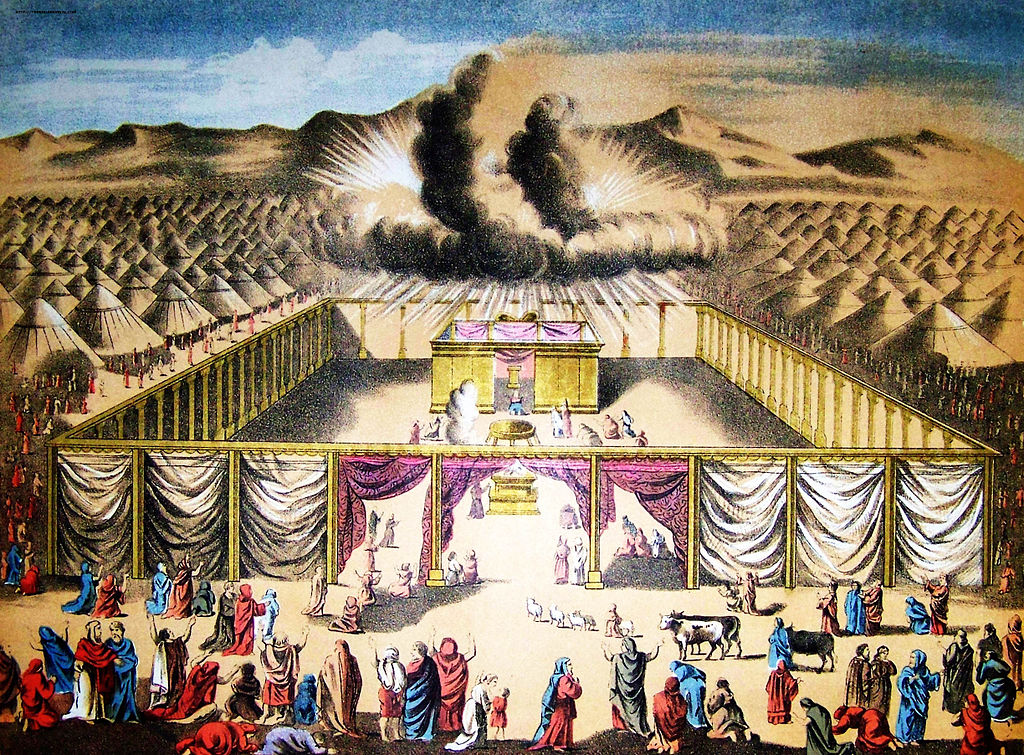 (Illustrators of the 1890 Holman Bible [Public domain], via Wikimedia Commons)

The science of salvation showed them that there was a rectangle in the sand, with its fabric walls and movable fence posts that was a place.  It was movable, so it could be anyplace. It could be Babylon, or Ethiopia, or Canaan. All have a place on earth, a courtyard, and in that earthen courtyard animals died, wood was burned, blood was shed. There all life’s Calvaries were foreshadowed, with the blood of bulls, goats, lambs, and doves real and tragic. Surprisingly, this did not end in despair but instead purposeful death that offers a path to redemption. So we who live in the courtyard with death still long to escape into a holy place.

The holy place was close by, and lucky ones could escape from the death-laden courtyard to a barely glimpsed place of holiness. As the ordinary priests pushed through the tent’s veils, glimpses of golden furniture could be seen by the curious observant. The bread of grains ground to flour was holy; holy light came from the crushed olives in a 7-branched lampstand, and everyone could smell the odor of frankincense and myrrh on the golden altar long before there ever was a Christmas fair or mall.

Life was, however, not centered on the courtyard’s place in the sand with unavoidable death, nor on the earthy goodness of our daily bread. The golden light from the lampstand or the rich holiness of sweet smelling savors–these gifts were golden and holy but not the core of life.

The Most Holy Place was for practical purposes invisible. Even the chosen entered only with eyes closed and heads bowed. Only once as the earth made a circuit about the sun did a human ever formally enter. The thousands of women and men, girls and boys, on the sands of the camp knew of the Most Holy by story and viewed it only with imagination. But the story and the imagined image was powerful. For at the center of the universe was the throne of God.

And on the day of the high priest’s approach to that throne, they knew there was one hope and three things there: the hope was mercy, and the three things were law, providence, and quickening:

Under the solid gold mercy seat reside the lapis lazuli tablets of law–at the center of the universe are constants–reliable, dependable rules.  Obey and live is not just 10 commandments, but gravity, the speed of light, the beauty of the chemical table, and the life code written in every cell. Science with its constants and justice with its morality are at the center of life.

The pot of manna said that at the center of life is provision—Jehovah-Jireh (God will provide) was one of God’s earliest names. Every desire has its satisfaction. Taste and see that the Lord is good. He provides the wild ass with its grass, and the barren with her child. He gives rain to the just and to the unjust. Creation is receiving to give, and delighting in abundance. There are never “just enough” apples on the tree, always more than enough. No one can grow just one zucchini. Creation preaches generosity and abundance.

Aaron’s hiking stick was dry, dead, seasoned wood. But at the throne of God it is resurrected, and budded. Almond blossoms most likely, the first tree to bloom in the spring, the “quickening tree,” it was called. To “quicken” meant to live, to be resurrected (the “quick and the dead” has nothing to do with speed, it means the quick, or “living,” and the not-living). So as Aaron’s dead stick had budded, now enshrined at the throne of God was the promise of resurrection. The reign of death in the courtyard of life, morning and evening, day after day after endless day has its solution. Through death, a slain lamb would destroy “him that hath the power of death.” At the throne of God dry bones, dead sticks, must quicken and blossom into eternal spring.

The six-winged cherubim, although invisible in the courtyard, are very visible at the throne of God. With two wings they shield their holy faces, with two wings they cover their creaturely parts, and with two they hover over the truth of the mercy seat. The law and justice are there, but at the center of this universe, God’s mercy trumps his law. Lawbreakers are protected, fed, and resurrected at God’s throne.

Gopher wood, seal skins, silver, copper, gold, frankincense resin, olive oil, flour, salt, threads—the tabernacle in the wilderness was all things. Materialism, craftsmanship, mathematics, geometry, color, taste, and scents all served the camp, playing religion in their sandbox existence. Stuff was the reality of life. Science and materialism rule. We ourselves are dust. Angels have some kind of wing. All in the courtyard of life live with the reality of death.

But above the chest of the holy ark, above its solid gold mercy seat, between the wings of the angels was… nothing. There is nothing there at all. Nothing. No-thing.

The ark of the covenant, the center of the universe, is quite empty. The angels enshroud nothing. The tomb where Jesus once lay is empty; He is not there. The fingers searching for the wounds in His side now search in vain. We can open every cell in every creature in every age of the earth from the Cambrian explosion to the age of the dinosaurs to the civilizations of mankind, and there we can read in every cell the DNA/RNA codes of life, but we never ever see the code giver, only His code.

Everything on earth is intelligently designed, the pin tailed duck, the bark of a redwood, the eye of a mosquito, the thumb on your hand—every thing shows a design, and all living cells have its coded recipe. But you never see the Designer.

I just spent nearly a fortnight near Paradise, California, with my wife Deanne and her sister, brother-in-law, and a sister-in-law. Their parents were Dr. Dean and Dorothy Hoiland who with four young friends founded and then gifted to the church the Feather River Hospital, which has led to the formerly massive Paradise SDA church and its 12-grade school. All this and 13,000 homes, hundreds of vehicles, many businesses and many lives were destroyed or disabled in minutes to hours with the blow torch flames of November 2018’s Camp wildfire. California from north to south was under the curse of prolonged drought, and Santa Ana winds caused flames to move as fast as 200 miles per hour. I listened to my relatives, and many of the thousand-plus Adventist church members, hospital workers, teachers and students from Paradise tell of the miracles of survival with blocked roads, exploding propane tanks, falling electrical power lines threatening their lives, and tossing them into the same life as that of immigrants looking at Trump’s wall, or Syrian refugees searching for a meal in a hastily erected camp in some dusty field. Many literally were tented in the sand of an empty field just like an Israelite refugee of old.

For my sister-in-law, for my college classmates, for the nurses escaping in their own vehicles with patients while their houses burned, and firemen fighting to save people while not knowing if their own families were safe, every Thing was gone except what they put on that morning as they left mansions or their mobile homes. At the center of their universes literally everything was gone.

But as I watched the emptiness, the absence of things, over and over again I saw that the No-thing was more real than the things. The No-thing at the center of the Universe becomes as visible as the cherubim about the throne become when all things go away.

I saw provision, I saw spiritual laws that may not be broken, and resurrections begin to bud as I watched reflections from the empty mercy seat at the center of creation. Humans right and left by the thousands behaved selflessly and bravely to help each other–

Kindness, courage, giving, helping, risk-taking for others, love sweet love was designed into human hearts by the invisible, No-thing, reality at the center of the Universe. Humans deprived of things act in the image of the One they were designed to be like. And although all those words stand for invisible, intangible, debatable feelings, thoughts, motives, deeds, they are as real, as true, as reliable, as precious as all the badger skins, incense burners, or golden tables in this world.

The empty tomb, the hoped-for-but-absent Jesus, the No-thing over the ark, remind us that no one sees God. We should not expect it, nor deny it. The non-materialism of God is not our weakness; it is our glory.

The Shekinah shines brightly not because something is there, but because the No-thing is there. God is made of nothing exactly because He is the creator of everything. But being no-thing doesn’t mean not real. And when we are looking at things made we scientists can’t deny a Maker.

In fact, the closer we get to the throne of the invisible the more real and holy and precious things become. Pretty copper in the courtyard becomes silver sockets for the holy tent, wood covered by gold for the table, and solid gold under the empty space over the ark.

And the invisible realities of life, the emotional truths, the precious invisible ties of lover to beloved, the reality of beauty and design or symmetry, the power of music and harmony, or the ability of words even when read silently to create pleasure, change, adventure and service cannot be denied. The satisfaction that comes not from things but from their arrangement.

All things bright and beautiful, all creatures great and small, all things wise and wonderful come from the emptiness that fills all. For it is His nothingness that makes everything in which we live and move and have our being.

I’ve seen the invisible before, and I see it again rising from the ashes of a Paradise lost.