The Little Horn of Daniel 8

This argument makes me think of someone today, decades after the collapse of Soviet Communism, arguing in favor of the economic and social benefits of Stalinism.

Been there, done that, no thanks.

However, because Adventist Today, in its self-proclaimed “open-mindedness,” decided to post the article, “Why the Little Horn of Daniel 8 Must Be Antiochus Epiphanes” by Winston McHarg, I’ve decided to respond.

Now, please, I know how things work on here, and were I to write, “Good morning, merry sunshine!” the knives will come out and I’ll face a barrage of criticism about what a mean, nasty dirtbag I am.  I concede—I’m all those things, even worse.

So, now that we’ve got my repulsive character is out of the way, let’s focus on the arguments at hand, and not on my meanness, nastiness and dirt baggery.

Daniel 8 does not appear in a vacuum. It comes after two parallel chapters, Daniel 2 and 7, which both help set the background for interpreting Daniel 8.  The link between these three chapters, and this principle of amplification between them, is not an Adventist concoction; other scholars have seen it. And no wonder; it’s obvious.

Daniel 2 tells about four world empires (Babylon, Media-Persia, Greece, and Rome).  The chapter, though, ends in the future, at a time when a stone, “cut out without hands” (Daniel 2:34) smashes all the world empires until “no trace of them was found” (Daniel 2:35) and then “the God of heaven will set up a kingdom which shall never be destroyed; and the kingdom shall not be left to other people; it shall break in pieces and consume all these kingdoms, and it shall stand forever” (Daniel 2:44).

Two crucial points from Daniel 2.  First, after Greece, only one more kingdom comes, the iron in the legs, and the iron and clay in the feet and toes (Daniel 2:33). Thus, after Greece only Rome appears, the last earthly kingdom, even if Rome changes form (the iron mixes with clay but remains iron all the way to the end).  Second, the chapter ends with God’s eternal kingdom being established.

Though more details are given, Daniel 7 covers the same ground as Daniel 2: four great world empires (Babylon, Media-Persia, Greece, and Rome). And, as with Daniel 2, the chapter ends with God establishing His eternal kingdom. “Then the kingdom and dominion, And the greatness of the kingdoms under the whole heaven, Shall be given to the people, the saints of the Most High. His kingdom is an everlasting kingdom, And all dominions shall serve and obey Him” (Daniel 7:27).

And like Daniel 2, in Daniel 7 after Greece only one more kingdom arises, the fourth beast and the little horn that comes directly out of that beast (Daniel 7: 7,8, 19, 25) and that remains part of it. What major power arises after Greece and, well, must be in existence today because, like the iron and iron and clay in Daniel 2, extends to the end of time, when God establishes His eternal kingdom?

Of course, Rome, depicted first in the pagan stage (the fourth beast) and then the papal stage (the little horn that arises directly out of the beast and that remains part of it).

Thus, as with Daniel 2, two crucial points with Daniel 7. First, after Greece only one more worldly power arises, the fourth beast (pagan Rome) and the little horn (papal Rome). Second, the chapter ends with God’s eternal kingdom being established.

Daniel 8 is a parallel prophecy of Daniel 2 and 7, with some new details given, others left out. Perhaps the greatest difference is that, instead of dealing with four earthly kingdoms, it deals with only three, Babylon being excluded. Considering that the time of the vision was under the reign of Belshazzar (Daniel 8:1), Babylon was soon to be history, and the prophecy focused on what was coming.

With Babylon gone, Daniel 8 starts with the Media-Persian empire and extends to the end time (Daniel 8:25, 26). Daniel 8:17 specifically said that the vision “refers to the time of the end,” an emphasis repeated in verse 19 and echoed in verse 26.  Considering that in the two parallel visions, Daniel 2 and 7, the time of the end reaches to events still in our future (God’s eternal kingdom), it’s not unreasonable to assume that Daniel 8 would as well (see below).

(McHarg’s argument about “exceeding great” pointing to Antiochus attack on the Jews doesn’t work. Yes, Antiochus persecuted the Jews in a big way, but that still doesn’t make him and his empire greater than what come before.  The argument hinges on the idea that we interpret the text through how others in the past might have seen it, but that’s not how we interpret Scripture. Some thought Napoleon was the anti-Christ; that hardly makes it so. The text makes the little horn greater than either Media-Persia or Greece, which Antiochus, even when persecuting the Jews, wasn’t.)

Instead, what world power, arising after Greece, and greater than either Greece or Media-Persia—the same power that appears in both Daniel 2 and 7—is depicted here?

Thus, in both Daniel 2, 7 and 8, the power that arises after Greece exists until it is supernaturally destroyed at “the time of the end” (Daniel 8:17).  After all, if the vision of Daniel 8 is for the end, and the little horn’s demise is the end of the prophecy, then its demise was clearly “at the time of the end.”

Also, Jesus Himself (Matthew 24:15; Mark 13:14), referring to “Daniel the prophet,” places the “abomination of desolation” spoken of by Daniel (Daniel 9: 27; 11:31; 12:11) in the context of the Roman empire—the empire in which the entire New Testament narrative unfolds.  With Jesus placing this event yet in the future even to Himself in the flesh, his words hardly bode well for Antiochus, who died long before Jesus was incarnated.

The Origin of the Little Horn

Mr. McHarg makes a big deal out of the argument that the little horn arose out of one of the four kings left over from the breakup of Greece.

Let’s look at the texts: “Therefore the male goat grew very great; but when he became strong, the large horn was broken, and in place of it four notable ones came up toward the four winds of heaven. And out of one of them came a little horn which grew exceedingly great toward the south, toward the east, and toward the Glorious Land” (Daniel 8: 9, italics mine).

Even more powerful evidence that the little horn did not arise from the Seleucid empire is found in the explanation of the little horn itself.  Daniel 8:21-22 names Greece and then depicts the demise of Alexander and the breakup of the empire into four other kingdoms. What happens next?  How is the rise of the little horn interpreted by the Gabriel himself? “And in the latter time of their kingdom, When the transgressors have reached their fullness, A king shall arise, having fierce features, who understands sinister schemes” (Daniel 8:23).

Notice—not the slightest indication that this king arose from any of the four kingdoms before it. It says only that in their latter time (which, by the way, doesn’t fit Antiochus, who was eight in a line of twenty kings) of their kingdom, another king would appear, with nothing which indicated that this king would arise out of them or from among them. Contrast this with the little horn in Daniel 7, depicted as arising from among other horns: “I was considering the horns, and there was another horn, a little one, coming up among them, before whom three of the first horns were plucked out by the roots” (Daniel 7:8, italics mine). How easy for Daniel 8, in interpreting the little horn, to have expressed something similar in verse 23, such as “a king shall arise among them” or the like.  Instead, nada.

Hence, the argument that that the little horn is the Seleucid Antiochus IV Epiphanes falls flat here too.

What surprised me was Mr. McHarg’s attempt to fit Antiochus into the 2300 days, writing that “Antiochus continued for approximately (possibly precisely, it is impossible to determine) 2300 days (v. 14).”  The 2300 hundred days comes out to six years and four months and a couple of weeks. Antiochus’ persecution lasted a bit more than three years. In an attempt to make it fit, some have argued that the 2300 “evening and morning” really mean 1150 days, closer to the time of Antiochus but still off by enough to make it not work.  Mr. McHarg, to his credit, never tried that move, though it might have worked better than merely seeking to plug Antiochus into the 2300 days, which doesn’t work at all.

Also, the little horn power is depicted as taking away the “daily” (Daniel 8:11), which he argues was Antiochus, who “put a stop to the sacrifices for a period of over three years.” Well, again, three years isn’t close to 2300 days. Yet Antiochus didn’t stop just the “daily sacrifices” as McHarg writes.  First, the word “sacrifices” isn’t in the original. It is supplied. Second, the word “daily” refers to all the rituals associated with the sanctuary during the course of the year, but not what with what happened on the Day of Atonement. So why would the text say he took away only the “daily,” as opposed to the entire sanctuary ritual, which included the yearly, the Day of Atonement ritual? Did Antiochus suspend all the rituals, expect for the Yom Kippur ritual? Not likely. Hence, the text makes no sense when referring to Antiochus.

I could go on. If nothing else, the parallels between Daniel 2, 7 and 8 alone –in which the last power depicted in all three exists until “the time of the end” (Daniel 8:17), when all three are supernaturally destroyed—debunks Antiochus for Daniel 8.  And, then, with Jesus putting events in Daniel in the future even from Himself while on earth tosses more dirt on the already interred Antiochus interpretation.

Mr. McHarg makes a big deal about how so many commentators identify the little horn as Antiochus. With all due respect, these are the same folks who tell us that Jesus or Paul or the apostles changed the Sabbath to Sunday; or that Sunday replaced the Sabbath because our rest is in Jesus; or that the soul is immortal; or that Genesis teaches evolution, and the like.

It’s not called “Babylon” for nothing, friends.

Now, with the first three events of the prophecy major happenings in the history of the world and of God’s people, what should that automatically teach us about the meaning of the final, climactic event of the prophecy—the cleansing of the sanctuary?

Of course, whatever it is, it must be of major significance.  Even if you don’t believe in the SDA 1844 interpretation, whatever happened at the end of the 2300 days, given the context in which it appears, should be something as major as what precedes it in the vision.

And it is—the cleansing of the sanctuary is the same thing as the judgment scene depicted in the parallel prophecy of Daniel 7, the judgment that is “made in favor of the saints of the Most High” (Daniel 7:22), the judgment that leads directly to God establishing His eternal kingdom.  That’s big enough, indeed, to fit the context of the major events that led up to it in Daniel 8.

And, I might humbly add, Seventh-day Adventists are the only people in the Christian world who give this text the due it deserves.

Final note.  The bio said that Mr. McHarg left church employment over his disagreement with the Investigative Judgment.  Too bad we had to lose him, but at least he had the honesty to no longer take a paycheck from an organization when he disagreed with its basic tenets. Too bad many others don’t have that kind of integrity. 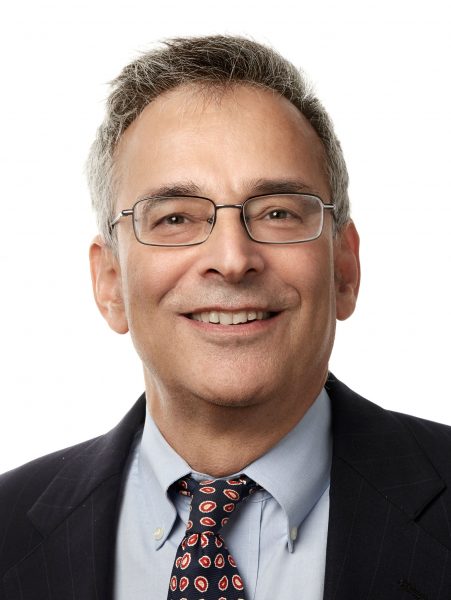 Clifford Goldstein is editor of the Adult Bible Study Guide for the General Conference of Seventh-day Adventists, and author of Baptizing the Devil: Evolution and the Seduction of Christianity.