The End of the Scroll, by Herold Weiss 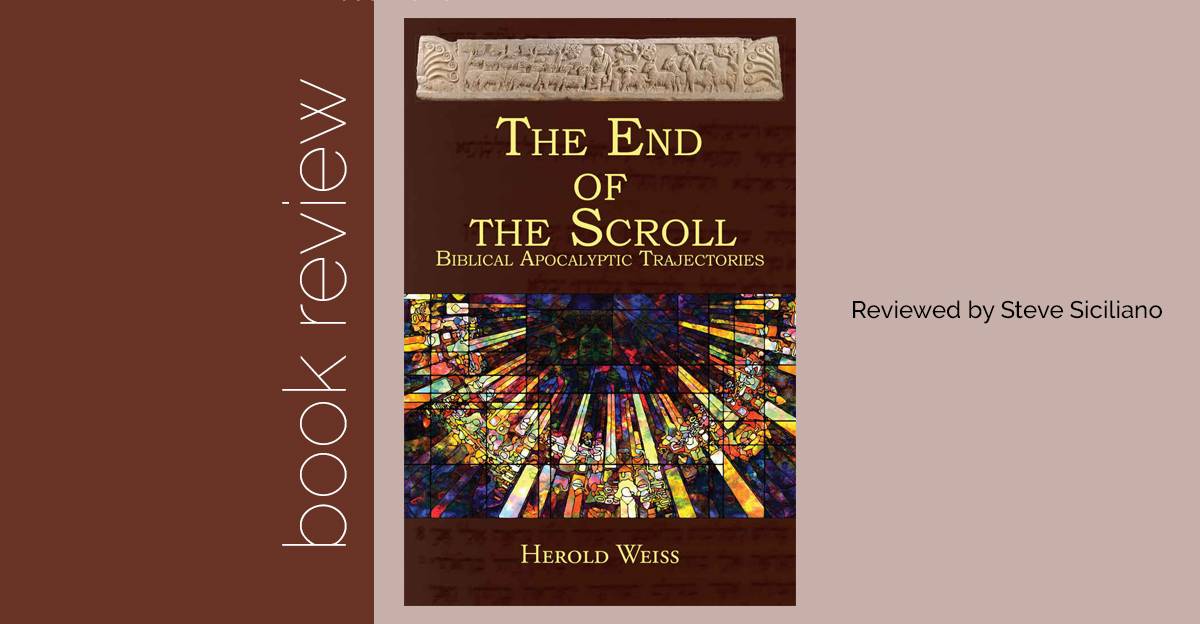 Herold Weiss’s latest book, The End of the Scroll: Biblical Apocalyptic Trajectories, sets out to survey the apocalyptic writings of the Old and New Testaments, paying careful attention to their meaning in context, and noting how their themes evolved over time. The book accomplishes those goals in rich detail, while exemplifying a way to study the Bible that is largely unfamiliar to most Seventh-day Adventists.

Weiss consciously and consistently reads the relevant books and passages on their own terms rather than assuming they all share a univocal uniformity. He takes into consideration contemporaneous events and related literature in order to trace why the apocalyptic genre may have developed, and what questions or needs the writers sought to address. This is in contrast to most popular writing about Revelation and kindred compositions, which ignore those contextual elements in favor of collecting verses from all over the Bible and arranging them according to an explanatory blueprint that often exists primarily in the interpreter’s mind.

Having established his methodological approach, Weiss offers his foundational thesis: the apocalyptic materials were not written for the purpose of predicting the future or even primarily for encouraging believers to remain faithful while under pressure—though this latter is one of their goals. Rather, the overriding raison d’etre of apocalyptic is theodicy: it seeks to justify or vindicate God’s righteousness in the face of events that would otherwise make God appear either unjust or incompetent to assert His will.

To be specific, Weiss contends that the historical emergence of the individual ego in human self-understanding precipitated the need for a new and more radically cosmic theodicy, in contrast to classical prophecy. His argument on this point seems to go as follows: as long as the ancients viewed individuals as members of a group that either rises or falls together it was relatively easy to explain the suffering of those whom we would call innocent parties; families, tribes, and nations were viewed as units existing in mutual solidarity, so whenever a king or leader acted, either well or badly, it was natural to understand that the group and all its constituents would either thrive or fail collectively.

Once society evolved to think of individuals as independent, morally accountable actors, however, the need arose to explain the suffering of those who did not do anything wrong to merit it. The apocalyptic worldview met that need by introducing a symbolic universe that is larger and more complex than the simple, curse-and-blessing motif that suited a covenantal community. To account for a new and more ethically complex situation, apocalyptic writers envisioned a fallen present age to be followed by a coming age in which God, having subdued the primordial forces of chaos, will finally bring justice to light.

This analysis explains why, according to Weiss, apocalyptic literature draws on mythic, cosmogonic imagery rather than simpler typology from the history of Israel. The increased complexity of the perceived problem demanded a new and more comprehensive solution. In fact, it requires nothing short of a new creation.

Having thus established his thesis and methodology, the bulk of Weiss’s book focuses on individual pieces of biblical apocalyptic writing, starting with  Ezekiel and Zechariah and moving comprehensively through Daniel, the gospels, the writings of Paul, Hebrews, Revelation, and a few other of the New Testament letters. I will not provide a synopsis of his findings on those chapters here because—in addition to the hermeneutical issues just described—they are the main reason for you to read the book!

I will report that Weiss proposes a number of possible reconstructions of the setting and the purpose for which each apocalyptic piece was written. However, because the book has few citations, it is hard to know which of his proposals are consensus views and which are his own hypotheses. Each reader is, of course, free to assess his conclusions, but one thing seems clear: all of the author’s propositions arise out of an attempt to let the biblical materials speak for themselves.

In that regard, Weiss’s book serves as a veritable primer on historical-contextual reading of the Bible. I believe that is reason enough for Adventists to buy and read this book.

Steven Siciliano is pastor of the Jackson Heights and Hartsdale Churches in the Greater New York Conference of Seventh-day Adventists.