The Danger of Living Under Eschatological Pressure

I wrote letters with great urgency. I had to do my best to save everyone.

It was July of 1998, and Pope John Paul II had just written an apostolic epistle called Dies Domini, that sought to encourage Catholics to rediscover the importance of the “Lord’s Day”—Sunday. To me, just turning 13, it seemed like all the pieces in the puzzle were neatly fitting together. This was the sign which we had all been waiting for, the pronouncement of the Sunday law, and beginning of persecution of those who go to church on Sabbath! We all reacted eagerly: the message had to reach all Sunday keepers!

I was starting my first year of high school. I was growing physically, and also learning new educational concepts which my mind was absorbing like a sponge. I was under a lot of pressure to succeed in my studies, to get good grades in this new Adventist school environment.

The world was awash with the “Y2K” buzz. There were frightening predictions: there would be a global power blackout, computers would crash, and general chaos would descend upon society. In the religious world this was given prophetic meaning. Some also saw eschatological significance in the emergence of the new millennium. Could Jesus return in the year 2000?

My new school was involved in evangelistic efforts on campus. Inspired by our belief in the imminent return of Jesus, we held weeks of prayer, daily prayer meetings and other evangelistic efforts to win souls to Christ. A group of us formed a sort of preachers’ association. We read Spirit of Prophecy books more than we studied our school books, even during school study hour. We stopped watching the “worldly” movies screened each Saturday night in the dining hall. We requested permission to instead watch video sermons in the library, a series featuring a popular televangelist who was doing meetings in the Caribbean. The televangelist had a powerful voice and an imposing demeanour,  characteristics which we tried to imitate. He was very direct in launching straight cutting truths to his audience and had an electrifying presence. We assimilated his methods as much as we could.

We had a strong urge to save people from the Sunday laws and persecution, which we were sure would happen within the next few months. We requested every opportunity to preach, and boy, did we preach! We were brutally tactless.

We designed our sermons to target non-Adventist students. We told them in no uncertain terms that they needed to leave their Sunday-keeping churches and join our true remnant church or else they would be eternally lost. We highlighted every fault we could find in their denominations and tried to show them how they were all connected to the beast of Revelation 13, which would soon rule the world. Every sermon was an opportunity to push people to make a decision. Some students of other denominations complained to our boarding master that we were insulting them in our sermons. But the more people were offended, the more we thought we’d been effective! Sometimes I shudder to think how I must have looked like trying to use fear and psychological manipulation to urge people to join my church and get saved.

In my zeal I extended my evangelism beyond school, I wrote letters to one of my neighbours, a friend of my father, and a pen pal I had just made from Canada. The letters were dripping with youthful zeal, zest and pathos. I cannot recollect the exact nature of words I used; however, I am sure they were brutal and insensitive. My pen pal never responded, while my dad’s friend and our neighbour ambivalently acknowledged receiving the letters. They didn’t convert to Adventism; being mature and discerning, they ignored my offensive attacks but continued to maintain a close relationships with my family.

I think it’s noteworthy to mention that these latter two families were a source of financial and material assistance during my high school years and here was I, in my immaturity, writing personal attacks on their faith! How could I forget how our neighbour later on, in spite of my inflammatory letter, gave me his personal shirt when I had no adequate uniforms to use when I went to a new school at Advanced Level? They demonstrated Christlike traits, while I appeared radicalized in my fascination with eschatological musings. I’m sure they felt sorry for me, in my incessant rants and bickering.

To the best of my knowledge, most of the non-Adventists we preached to at that time didn’t convert to Adventism, and even some of my friends who were part of the preacher’s association eventually found meaning outside of the Seventh-day Adventist faith.

Our pioneers’ selection of the name “Seventh-day Adventist” reflected the emotional upheaval of the great Millerite movement that had shaken the world. But the Great Disappointment dealt a heavy blow to those who had been anticipating the return of Jesus, and the movement was facing potential demise.

I still firmly believe in the second coming of Jesus. However I have discovered that this is not the most important message we Adventists have. We have a more beautiful story to tell, more important than our denominational name describes. In 1888 the church found a better foundation in the message of Waggoner and Jones, which was fully supported by Ellen White herself. These visionary young men brought a clearer view on what was the essential message for that time. Ellen White wrote,

“The shortness of time is frequently urged as an incentive for seeking righteousness and making Christ our friend. This should not be the great motive with us; for it savors of selfishness. Is it necessary that the terrors of the day of God should be held before us, that we may be compelled to right action through fear? It ought not to be so. Jesus is attractive. He is full of love, mercy, and compassion. He proposes to be our friend.” Signs of the Times, March 17, 1887 (emphasis added).

The church leadership initially resisted this message because it represented a radical shift in what was being preached. Ellen White was saying that the Second Advent was not to be made the main attraction! It was not to eclipse the person, knowledge and relationship with Christ! The Second Coming was only important when connected to an experiential faith. There could be no Second Coming without Christ. This new light was restoring Jesus as the central truth of the Advent message.

How to Know the Truth

The Bible says false Christs will appear before the true Christ comes. This would mean we need to adequately familiarize ourselves with the nature of the true Christ if we are to shield ourselves from falling prey to the deceptions of the false. Preoccupation with what we believe is false will not shield us from deception. The Bible says even the very elect, if possible, could be deceived (Matthew 24:24).

Suppose most people have never seen a hundred-dollar bill. One day a person comes to town to tell them hundred dollar bills would soon be available in local banks. But he doesn’t want them to fall for counterfeit bills. Would providing numerous specimens of fake bills be sufficient to protect the residents from falling prey to the false bills? Of course not. He would show them what a true one-hundred dollar bill looks like. They have to study the genuine hundred-dollar bill until they know all its features. This is the only way one can be safe from a counterfeit.

We have spent too much time studying the false message, rather than seeking the genuine in Jesus. We need to stop acting as if every move at the Vatican is eschatologically significant. Rather, we should be following the Lamb wherever He goes, not the Pope (see Rev. 14:14). We need to end our preoccupation with covert Jesuits among us, as well as subliminal signs, obelisks and conspiracy ideations. (I stopped worrying about obelisks once I found out Ellen White’s grave has one.) Even if there were some truth to some of these fears, they breed paranoia, anxiety and suck the joy from the Christian life.

Let us stop trying to save other people. We have one Saviour, who is Jesus the Christ (see Phil. 3:20). “Jesus saves” should reverberate everywhere, without any distractions. Jesus is the magnet that draws everyone to him, and not our fancy denominational name, not our vegan diets—just Jesus. Our central message is presenting the beautiful character of our God to the world as a witness (see Matt 24:14). This is the message that can withstand the test of time even should the advent continue to be delayed.

I speak as a young African Adventist who is trying to make sense of the abject poverty, unemployment and harsh economic challenges that are our daily realities on this continent. From the time when the message was first proclaimed to my ancestors, there has been the auspicious expectation of a brighter day that would come soon. Yet the toils and turmoil of Africa have not ended. The Second Advent has been delayed, when assessed by the expectations of the people to whom it was proclaimed back then.

I fear that the imminent Advent was used as an excuse to ignore the pain and avoid seeking solutions for the ills of Africa. Africa’s perpetual struggle needs something more than what skeptics have branded “pie in the sky by and by.” We need a firm basis for our faith, not sanctified escapism. The Second Advent should not be used as a placebo that ignores present realities and breeds narcissistic preoccupations. We can’t neglect active participation in any process that might possibly improve our livelihood now because we await what is still yet to come. That is a precariously gloomy way of existence and it is existentially chaotic.

A personal knowledge of God’s character is comforting even amidst chaotic realities. God is our personal friend  who “..is full of love, mercy and compassion.” A God who would have us seek solutions to issues of poverty, unemployment and harsh economic conditions, not just ignore them. We may not totally solve these problems, but when we ameliorate them we help the destitute have a foretaste of heaven.

I wish the message of God’s character were made our main and foundational fundamental belief. It would help us detect “beastly” principles of coercion, fear and punitive inducements whenever and wherever these are applied. We would exorcise these demons when they emerged amongst us, rather than trying to locate them in a cathedral somewhere in Europe.  This is the message that would result in proper balance and emphasis of other fundamental beliefs.

It won’t do us any good to continue preaching the message from the point of view that God is arbitrary, vengeful, exacting, unforgiving and severe, a God who forces people to believe what they don’t understand. We can’t honestly think that people would be attracted to the soon coming of such a tyrannical and monstrous being!

But they will be attracted to Jesus. “And when I am lifted up from the earth, I will draw everyone to myself.” John 12:32 NLT 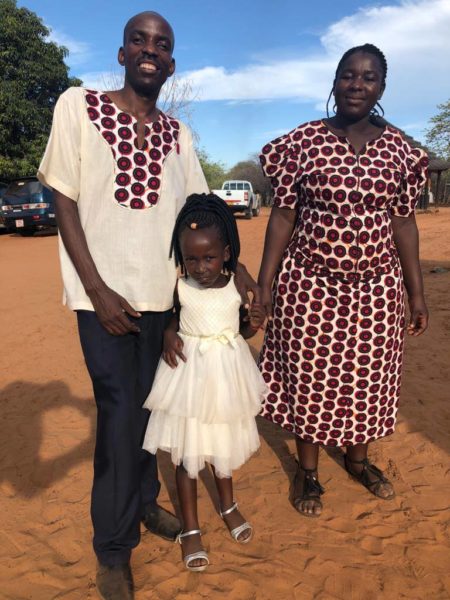 Arthur Sibanda is a mental health nurse in Victoria Falls, Zimbabwe. He and his wife, Mercy, have one daughter, Nobukhosi Tashanta. He enjoys writing, composing songs, and singing, and is also involved in a ministry helping people overcome sexual brokenness.

Adventists in Ontario, Canada, open their first “center of influence” relating to a secular society Sharing Scripture for February 2 – 8