The Creation and Feeding of Ravens

by Jack Hoehn, March 11, 2015:    So no more speculation and hypothesizing.  Let’s do a little nature study in the Bible. 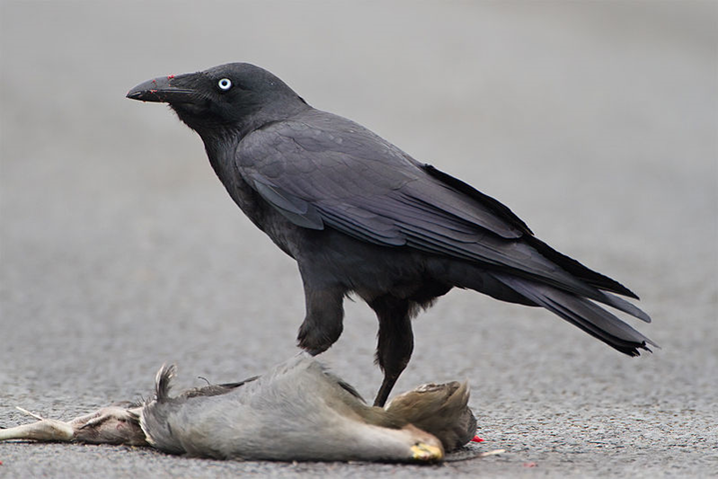 Look at the birds of the air;
they do not sow or reap or store away in barns,
and yet your heavenly Father feeds them.
Matthew 6:26

Consider the ravens:
They do not sow or reap, they have no storeroom or barn;
yet God feeds them.
And how much more valuable you are than birds!
Luke 12:24

Who provides food for the raven
when its young cry out to God and wander about for lack of food?
Job 38:41

The eye that mocks a father and scorns to obey a mother
will be picked out by the ravens of the valley
and eaten by the vultures.
Proverbs 30:17

Your carcasses will be food to all birds of the sky
and to the beasts of the earth,
and there will be no one to frighten them away.
The LORD will smite you with the boils of Egypt
and with tumors
and with the scab and with the itch,
from which you cannot be healed.…
Deuteronomy 28:26,27.

What is the price of two sparrows–one copper coin?
But not a single sparrow
can fall to the ground
without your Father knowing it.
Matthew 10:29.

I know every bird in the mountains,
and the insects in the fields are mine.
Psalm 50:11

Supporting creation, my North Pacific Union GLEANER features, for 2015, 52+ pictures of The Wonders of God’s Creation.[1]  15 of those pictures are of wonderfully designed and created predators, animals created to prey on other animals.  We admire the fox, cougar, bear, eagle, heron, coyote, and owl and admit that they are not clumsy or deformed vegetarians struggling to make do with an animal diet because nothing else plant-based is available to them.

The owl has feathers intelligently designed precisely to let it fly slowly and silently across fields in stealth not to capture mushrooms, but rodents.  And the design is not only for slow, but also for silent, with special features on the leading edge that muffle sounds.  Stealth bombers from the Creator’s workshop.  The fox and bobcat and cougar are designed to kill and eat.  Only the bear could do pretty well as an omnivore and thrive on a plant based diet, and even that would be hard without catching fish.

And then there are the Ravens, Corvus corax or its close relatives.  The Biblical Hebrew is some places oreb “black” and hayit “screecher” but the Greek corax suggests “sate, glut, feed full, to tear, ravage, or pluck” showing its function as eating dead things, a flying garbage collector.  I pity the prophet of God (the one translated to Heaven without seeing death) who was fed by these carrion collectors.[2]  Now we are not to eat ravens[3], but they are clearly intelligently designed to eat our carcasses and other dead flesh.[4]

God feeds the ravens.[5]  And knows when the hawk catches the sparrow.  “Then the young lions roar for their prey, stalking the food provided by God.”  Psalm 104:21.

How can these predators and carrion feeders be Wonders of Creation?  Aren’t they wonders of the Fall?  Why are there so many intelligently designed fangs and stings and teeth and talons?  Did they all suddenly evolve minutes after Eve ate the forbidden fruit?  There were ravens on Noah’s ark, friendly ones that would do Noah’s search and rescue operations for him, flying back and forth until the ground was dry enough for him to stay away after seven weeks of flying (enjoying, no doubt, a lot of flood-induced carrion).

CREATED BEFORE THE FALL?

If God did create ravens and owls and vultures and other intelligently designed predators on Day 5 of His Creation Week, does that not tell us something about death before the fall of man?

Ellen White once spoke on why God created pigs.

“ As for pork, I never have anything to do with it because God tells me not to touch it, and He knows best. It is a scavenger. Its only use is to gather up filth. God does not want us to become scavengers to the scavengers.”[6]

If the pig’s “only use” is to gather up filth, to be a scavenger, and God created pigs on His sixth Creation Day before mankind’s fall, what was the pig doing before the fall?

If nothing died on earth before Adam’s sin, what were pigs for?  If there was no Great Controversy going on between light and darkness, between Christ and Satan, between love and hate, between good and evil, during the creation, who created intelligently designed things to control overpopulation, to destroy vermin, to scavenge the carnage of battles creation Day after creation Day?

As you know, if you have read my article in the print edition of the most recent edition of Adventist Today,[7] I believe that understanding the Great Controversy between Christ and Satan as preexisting the creation of earth, and continuing during each great Creation Day, then I can understand why God in mercy created garbage collectors like ravens and pigs.  Why in love, to prevent Satan-inspired overpopulation of rodents and vermin, he would create Intelligently Designed owls as stealth bombers.

Why cougars and lions and tigers were needed to deal with the sick or wounded and prevent overpopulation by herbivores.  And why nature was subjected to bondage to the fight going on in this universe between good and evil.

THEATRE OF THE UNIVERSE

When I was a teen, a series of programs and a book were published as “EARTH THEATRE OF THE UNIVERSE.”  I think the idea was right on.  That now on this earth other created intelligences can watch and see what Satan’s principles and what God’s principles look like when allowed freedom to work themselves out.  Although at the time that book was published, I thought it started as Adam and Eve left the gates of Eden.  But the evidence in the natural world suggests that this Great Controversy has been going on since Day One of God’s Creation Week.  Darkness and Light have been on demonstration.

In that light I can accept that Intelligently Designed carnivores and scavengers such as lions and ravens were created by God to demonstrate the difference between life and death, between murder and love, between living by predation and living with cooperation, in this laboratory of Good and Evil called earth.

Satan was here on earth from Day One of Creation.  I am sure he has been working things with his own super-intelligence to support his suggestion that by the genes acting selfishly, life will succeed.  God has either set up the experiments to elegantly test that supposition, or permitted Satan some manipulative freedoms to make his points.  I don’t see God creating viruses or plagues or cancers.  They all clearly are satanic manipulations of bacteria and cells.  But I can understand how God in mercy might create pigs to clean up the filth, ravens and jackals to remove the corpses, and owls to control plagues of rodent vermin.  Scavengers and predators can be Intelligently Designed creations made in wisdom and mercy and love for dealing with the results of a cosmic Great Controversy being played out on this earth.  When Queen Esther went before her king, she didn’t ask him to stop the attacks on the Jews; she asked him for permission for the Jews to defend themselves.  Likewise, when Satan launches an attack on God’s passive and plant-eating creatures, some of them may have to fight back with tooth and claw.  The thorns are there to protect the rose.  The dog must bite to protect his owner from the wolf.

God knows when the sparrows fall, but He does not yet stop it.  He is waiting for something.  Perhaps He is waiting for someone like you or your great-grandchildren?  Perhaps there are principalities and powers we do not know who are yet to be won.  Perhaps God is truly, as some of our theologians suggest, open about the future and working with us, until we decide enough is enough and agree to bring the battle to its end.  He has granted us great freedom, and determining the end may be in our hands by His design.

Perhaps He waits for us to ordain women!  I don’t know, and neither do you.  But until then, in mercy, dead sparrows and doves and nuthatches disappear because of intelligently designed scavengers and predators, as they have on each Creation Day that started in darkness, but ended in light, and each earth day since then.

We have no reason to not keep expecting the dawning from our present age of darkness to the New Day when predators will be de-clawed and scavengers will be given better food to eat.  If lions will thrive on straw, who knows if owls couldn’t learn to silently, slowly search for mushrooms or wild strawberries?

And if ravens flying to and fro looking for carcasses from Noah’s flood might not learn in a New Heaven and a New Earth that nuts, grapes, lychees, and rambutans taste better than eyeballs?

[Readers who don’t have a copy of the Winter 2015 Adventist Today print magazine,  with Dr. Hoehn’s article and many others in it, can order a copy from Adventist Today, P.O. Box 1135, Sandy, OR 97055-1135 as long as supplies last.  Or phone an order to (503) 826-8600 to start your subscription to this important independent publication supporting and encouraging progressive Seventh-day Adventist thought and practice.  $29.50 per year in the USA; less for multiple-year subscriptions.]

COMMENTS:   are welcome and  will be read, but may be shortened, deleted,  or edited by the author to keep them on topic and constructive.