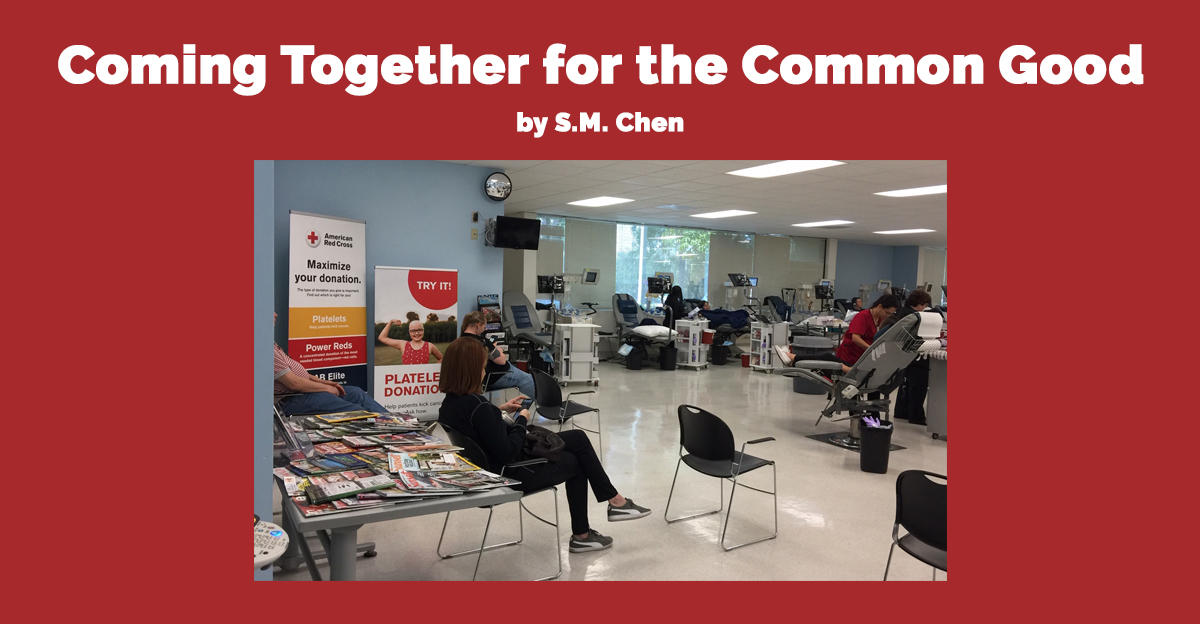 “No man is an island…”
John Donne (1572-1631), Meditation XVII, Devotions upon Emergent Occasions

Right at the beginning of the COVID-19 crisis, the Los Angeles Times had a column mentioning various good things we can do during these turbulent times. They included:

I don’t have a housecleaner, dog, or personal trainer and most of my neighbors aren’t elderly.

The paragraph about donating blood caught my attention, however. It had not occurred to me that there might be a blood shortage. I was able to make an appointment online with the closest Red Cross donation facility.

There are now four donation categories. The last time I gave blood there were not so many.

My blood type is AB, the least common. It made sense for me to donate AB plasma.

Meanwhile, our state went on near-lockdown.

The Red Cross facility is 12 miles away. The day of my appointment I thought I’d call, just to make sure the facility was open and they had me booked. They system-informed me there were over 90 calls ahead of me. I hung up and decided to wing it.

When I got there, there were a number of vehicles.

I entered. The sizable room was full with healthcare workers, beds, monitors, and various paraphernalia including magazines and posters.

Donors, both male and female, ranged from youth to older. One donor wore a royal blue triangular bandana around his nose and mouth. All was orderly and, save for low human voices and the occasional hum of machines, quiet. One group of donors wore headphones and looked into CRTs.  Some of those waiting gazed at their cellphones.

The young lady who logged me in didn’t find my name. My online reservation had been for naught. But they seemed happy to have me, so I stayed. Although I didn’t really need such, I was provided free vital signs (temperature, BP, pulse rate).

After a short wait, I was taken to a small room, where I was asked a number of questions by a pleasant middle-aged lady with a laptop. Having pre-screened, I didn’t anticipate being knocked out of the potential donor pool.

But one never knew.

There is no upper age limit to being a donor. There is, however, a minimum weight required. My daughter might have accompanied me to the Center as a donor had that not been the case.

The woman said, “I need to check your hemoglobin. Which finger do you prefer?”

“You flinched before I pricked you,” she smiled as she expressed blood from a fingertip.

“I think it was instinctive.”

I suddenly realized what Pavlov’s dogs might have experienced.

I returned to the large room and awaited my turn. I had some water, some coffee (my energy level being a bit low), and an energy bar. People went about their business, healthcare workers working, donors waiting or giving their life blood.

A pleasant woman took me to a recliner, similar to others in the room. She marked the outer margins of my left antecubital vein with ink. It resembled a railroad track. She was going to aim for the middle of the track.

She gave me an oval object resembling a ball that had begun to sag, to periodically squeeze.

But the collection machine began to beep, and continued to beep with annoying periodicity throughout the collection process. “I wonder if you didn’t hydrate,” she mused as she reset the alarm. “I think your vein sort of collapsed.” I thought, “Oh oh.” I said, “It’s been a few years since I’ve donated. I don’t think I hydrated enough. Plus I had some coffee.” “That may dehydrate you.” Maybe, I thought, the coffee was for the workers. “Next time I donate I’ll hydrate,” I promised. “Best you begin three days before, and hydrate for two days. The day before, you need not particularly hydrate.”

So my collection process was slower than it might have been. The process involved collecting blood (650 ml), then fractionating it, saving plasma and returning other blood products to me, along with saline and anticoagulant.

I didn’t want to do this all over again. At least not in the near future. I squeezed the oval harder and faster. “That should help,” she smiled.

The plasma volume soon exceeded 200 ml. But the bag containing the red liquid was not empty.

“When do you stop?” I queried.

“Do you want the rest of your blood?”

The needle came out and the nurse wrapped my puncture site. “You’re all done,” she smiled. “Thank you.”

It’s a presidential election year. The political divide is as deep as it’s likely ever been. But it rather warmed the cockles to see people come together for a common good, one larger than themselves.

With this troubled time of uncertainty comes the realization that we are all in the same boat, so we may as well row together.

I don’t know if this circular decal I was given at the Red Cross center is valid, but I like to think it may be. For me, it is enough. 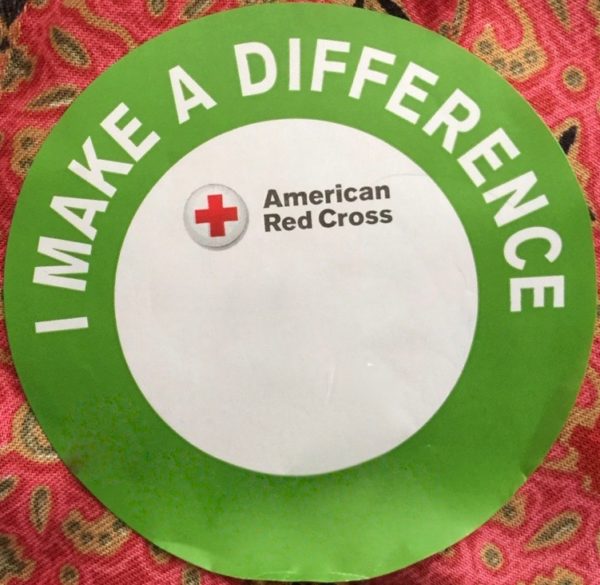