The Adjustment Bureau – Reviewed by “The Fool” 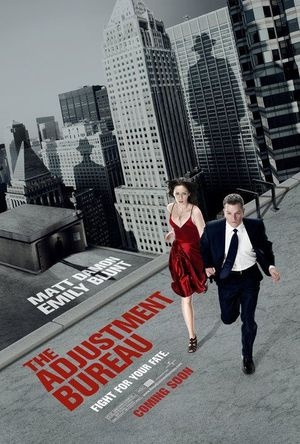 If your destiny allows it, choose to go see The Adjustment Bureau. While the movie isn't intended to be an apologetic on free will and determinism, it is entertaining, and will generate thinking and discussion on just those topics beyond the theater.

The film's premise begins just before David Norris (Matt Damon) is to give his concession speech for his Senatorial race in New York. He meets, and is instantly enamored with, the free spirited ballerina Elise (Emily Blunt). She inspires him to be authentic rather than artificial and his speech ends up ultimately propelling his political career towards the presidency.

At just about this point in the film we meet a bunch of guys in suits and fedoras, seemingly out of the 50's, who, as we begin to find out, are in the business of reprogramming certain ‘important' people's minds and nudging events to "better the world." As the story would have it, one of the agents assigned to David, goes to sleep on the job, so he misses his assignment to spill David's coffee so he doesn't meet Elise again on the bus. But because David doesn't spill his coffee, he doesn't change his suit, and therefore ends up at work before the rest of the Adjustment Bureau's ‘event coordinators' are done ‘reprogramming' the minds and lives of some at David's work associates.

The rest of the film is a world wind ride in the lives of David and Elise as we watch and weigh the choices they make while they are being influenced by a mafia styled Chairman who is impersonal and manipulative but allegedly bent on ‘maturing' the world towards free will. The way his agents influence the natural order of things is to move in and out of people's dimensions through secret doors. They know when to move and maneuver in and out of these doors by the use of organic books that act like crystal balls regarding people's potential choices.

While the story deals with authoritarian leadership issues and generates many metaphysical questions about outside influence, its main thrust is the love story between David and Elise. If the whole story were boiled down to its least common denominator, it would be the choice between power and love and the sacrifices one must make for either choice.

As a viewer I found myself rooting for David and Elise's love from the beginning. I hate to admit it, but I wasn't concerned with their affair, or even Elise's ex lover getting in the way, as much as I was with hoping that David would make the choice for love and avoid the Chairman's manipulation of their life events at all cost. When David and Elise end up in the chase of their lives, I was huffing and puffing from their fate all the way to the Statue of Liberty with them. I was rooting for free will and love and very much against the deterministic control and manipulation of the Adjustment Bureau. Of course, when we found out that even the Chairman was enamored with the notion of David pursuing and choosing love in spite of his ‘initial' plan for David's life, you begin to ask all kinds of questions regarding who is really in control of life. My seat partners and I sat in the theater for almost a half hour after the thing was over debating the issues that came up in this film.

When I hear the phrase "God is in control" in church, I most usually cringe. Not because I don't believe in the sovereignty of God, but rather because I wonder exactly what is meant by that person. Many times the accompanying story usually contains a miracle that none of us can deny or prove. While I can't or won't deny that God performs miracles, and does interact with our lives at important times, I inevitably question why He would play favorites in some people's circumstances and not in others. Why, after all, does God intervene in the life of one person's cancer and not in another's? I think this immature view of God's control inevitably promotes the reputation that God is our celestial bell hop. Sorry, but I don't think he is. I'm not a Deist by any stretch, but I do think that God not answering my every prayer the way I expect, can mature my faith. So, forgive me, but I tend to hear a lot of ‘miracles' in church from a mind that believes that "only a wicked and adulterous generation demands a miracle."

The Adjustment Bureau will also push your mind to question God's ‘control' of organizations. Whether it is this story's promotion of David to US President or the way things operate in the church, how much is the "Chairman" truly involved in the events that bring people to power—especially people who are given to the same impulses as David? I, like David of old, have prayed that a leader in our church would be seen for his manipulative and controlling ways and removed from leadership (or fall on his sword). But God didn't answer that prayer for a long time, and when He did, the leader only got moved to another arena of influence. Did Paul really mean "all things?" It is truly not easy trusting Him.

In the end, The Adjustment Bureau raises all these questions but offers no real answers other than love and sacrifice. Maybe in the last analysis, that's all that really matters. Terrible heresy and wonderful truths all rolled up into one?