Taking the Bitter with the Tweet: Adventist Church Criticized for Social Media Posts 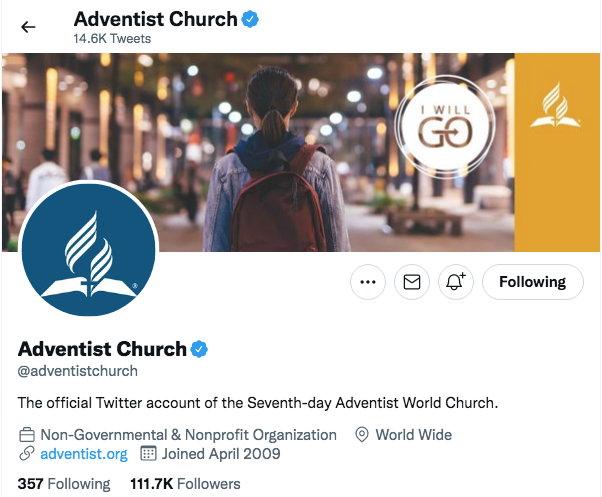 04 March 2022 | Social networking site Twitter has been aflutter over some posts on the official Adventist Church account, @AdventistChurch, this week.

One Twitter user identified as Larry Becker said, “This tweet seems like such a bad idea. I’m wondering where the public relations people were on this one.”

The next day, on Feb. 28, 2022, @AdventistChurch tweeted, “What started as a fun question turned into an open sharing of painful memories. Millions of students graduate every decade in Adventist Schools around the world. Let’s keep this conversation going so we can make things better in #adventistEducation.”

That same day, the Communication Department of the General Conference of Seventh-day Adventists posted an article on its website, “Special Note on the Adventist Church’s YouTube Channel” that said it had been “hacked and removed.”

According to YouTube’s Community Guidelines, violations include content that intends “to scam, mislead, spam or defraud other users”; content with “hate speech, predatory behaviour, graphic violence, malicious attacks and content that promotes harmful or dangerous behavior”; and content that includes “certain types of misinformation that can cause real-world harm, like promoting harmful remedies or treatments, certain types of technically manipulated content or content interfering with democratic processes.”

YouTube typically operates on a system that involves a warning and three strikes, but “sometimes a single case of severe abuse will result in channel termination without warning,” according to an article about YouTube’s Community Guidelines strikes.

Also on Feb. 28, 2022, @AdventistChurch posted a series of tweets about pride. The first tweet included the statements, “Let’s talk about #pride. Not the one associated with sexuality.” The tweet, which as of this date has 158 responses, generated indignation and confusion among many.

Twitter user “dy n sam” said in response, “I get what you’re trying to do, but that’s not how you do it. The math isn’t mathing.”

Moreover, the Church’s “5th #truth about #pride ” tweet included the statements, “Satan is quite happy for your [sic] to think of #pornography or #gluttony as beneath you. As long as your abstinence is motivated by pride, you are lost in the worst way possible.”

On Twitter, adding a “#” to the beginning of an unbroken word or phrase creates a hashtag. When using a hashtag in a tweet, it becomes linked to all other tweets that include the same hashtag.

However, while someone reading this particular tweet by the denomination could be led to pornographic content, conversely, someone who was looking up content under this hashtag could conceivably be led to the denomination’s content.

Adventist Today contacted the General Conference, which is responsible for the @AdventistChurch Twitter account, for information on who posted the tweets, but had not received a reply at the time of publishing.