I was born in 1936, and grew up in Takoma Park, Maryland, then the headquarters of our church. It was a very legalistic time. I was told that my probation could close at any moment, and I wouldn’t know it, but if I had any unconfessed sin then, I would be lost.

There was a lot of talk about the Time of Jacob’s Trouble, when we would be hunted and persecuted. Some people bought isolated properties and stocked the pantry with food to last for months, so they could escape when the Time of Trouble began.

An avid bookworm, I had read Foxe’s Book of Martyrs about the chilling methods of torture during the Inquisition and I prayed that God would let me die before that happened again in the Time of Trouble. I knew that before Jesus comes, we would have to live perfect lives without an intercessor before God.

Not that I went about in a state of perpetual terror, but there was definitely a low-grade current of fear running throughout those growing-up years. It seemed that the goal of life was to avoid being destroyed in the lake of fire when Jesus comes back, and to get to heaven, where we could enjoy all sorts of pleasures. Many years later, that began to seem like a somewhat selfish goal. On one hand, we were supposed to share the gospel so Jesus could return, but on the other hand we seemed to have a feeling of superiority to everyone who wasn’t part of our church, and we looked down on them.

Yet, I was thoroughly involved with the church. I loved to go ingathering in grade school, probably because I was one of the top solicitors. I played the piano for Junior Sabbath School and could play “The Captain Calls for You” so fast the singers could hardly keep up with me. I sang in the choir at Sligo Church. And of course, I attended all Adventist schools. I was thoroughly indoctrinated.

When I was ten, my parents spent a year at a new self-supporting hospital in Virginia, and the young pastor there started a baptismal class. I was quick to join and was excited about being baptized. I was sure that when I was buried to my old life in baptism, my life would be changed completely and I would then be perfect, always obeying my parents, never fighting with my little brother, or telling a lie! And for several weeks after my baptism I lived in a glow of holy joy, reading my Bible all the time and praying fervently. However, I soon found myself slipping back into sibling arguments and rebellion against some of my parents’ requirements.

As I entered my teens, my feelings of guilt began to grow. When I went to communion service and sat with my girlfriends, I wanted to experience it with awe and humility, but instead we sat and gossiped. Although I was a “good girl,” I entertained sensual thoughts. My reading wouldn’t all have passed Ellen’s inspection. I confessed my sins but couldn’t resist future temptations. Still, I longed to be perfect, but grew discouraged when it seemed an impossible attainment.

When I was 19 my older boyfriend, a theology major, asked me to marry him, and we spent many Sabbath afternoons during the next year reading The Shepherdess, a book about being the perfect pastor’s wife. After our wedding, I became Sister Grady, started going to Dorcas meetings, and played the piano for the evangelistic meetings in the Ontario church. I was constantly busy, while trying to be perfect. But new wives have many lessons to learn, often through trial and error, and I realized I was far from perfect.

At La Sierra Church, where Bob was the first youth pastor, I felt like everyone in that big church was looking at me when my new baby cried. Later we moved to Victorville and began fund-raising and building a new church. With two boys and many church responsibilities, I was even busier, and still trying to live up to that “perfect wife on a pedestal” I thought I had to be. By this time, discouragement had really set in, and I began to believe that my prayers were futile.

By this time, I had another problem. Probably fueled by frustration, busyness, and guilt, I was eating too much and gaining weight. I had always had a sweet tooth but didn’t worry about it until it resulted in being overweight. Then, as a typical Adventist, I saw my overeating as a sin, and began praying that God would help me overcome it. I tried all kinds of diets but failed miserably in sticking to them. I suppose many readers can relate. But it seemed clear God wasn’t answering my prayers—prayers that I had been told He would always answer. That was when my private prayers became very irregular. I would plead with God in tears but lose my faith when I still struggled with the same temptations.

Fast-forward to a time when we were working at the General Conference after returning from 15 years as missionaries in Singapore. Not long after we came home, many little things that had made me feel uneasy through the years began to add up and I faced an unbelievable question about our youngest son: was it possible that he was gay? I really knew next to nothing about homosexuality, but somehow, I had absorbed the idea that it was bad, perverted, something we didn’t talk about. Yet I knew my son was a very sweet, spiritual boy, and one I seemed to have a special bond with because of our love for music, art, and poetry. I just couldn’t reconcile the two thoughts.

I was distraught and turned to God. The thin pages of my Bible were spotted and wrinkled with tears as I spent sleepless nights in desperate prayers. It wasn’t long before I was disabused of the notion that change was possible, when Colin Cook, Adventism’s answer to the homosexuality problem, was accused of getting too cozy with his counselees. And gradually, leaders of various change ministries began admitting they had not really changed, after all.

It was several years before I was willing to peruse books by various theologians whose re-reading of the Bible, in light of new knowledge about homosexuality, had enabled them to see the few verses that mention same-sex behavior from a new perspective. When I did read them, their new interpretations seemed to make perfect sense.

During this period, I had struggled with many questions and doubts, especially wondering why God would allow people to be born with an attraction that He condemned. That didn’t seem like a God of love! A lot of other questions that I had stuffed deep into my subconscious through the years, began to surface, and I had to re-examine everything I had been taught growing up.

For the most part, I retained my Adventist beliefs, but I rejected our attitude of exceptionalism and embraced the brotherhood and sisterhood of all believers. So many things I had been warned of as I grew up, I shed like a heavy winter coat in the spring.

And my greatest discovery was the joy of the gospel. That God, our judge, is also our advocate. That God isn’t as concerned about us becoming perfect, as He is about our learning to love one another. He is our friend and loved us “while we were yet sinners.”

Being a parent helped me understand how much God loves us, if we can love our children, no matter what they may do or how they may embarrass us. I began to see God in a loving, relational way. He hears my wordless prayers, my deep inner longings. He doesn’t reject me when I fail to resist temptation, but gently offers to do for me what I can’t do myself.

Unfortunately, my old legalistic background sometimes rears its fearful head, trying to steal my peace. The deep roots of legalism probably will not leave me completely till the day Jesus takes us to heaven, but today I can look back on my worst experience with thankfulness for the new life that grew out of it. 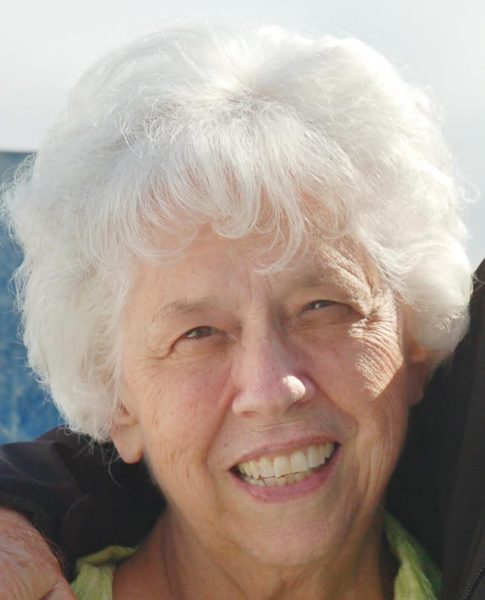 Carrol has been retired for 30 years, stays home and prays for her husband Bob when he takes seniors on mission trips, responds to all requests for help from LGBTIs or their family members, and quilts, reads, and writes her family history in spare time. Carrol has written a book about homosexuality entitled My Son, Beloved Stranger.