Stained Glass to the Glory of God 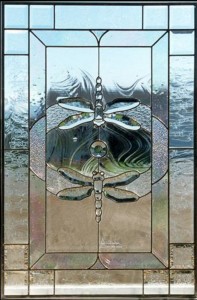 Virginia Davidson says one of the best things about her life as an artist is the answered prayers. When she had the idea for this dragonfly portrait, she knew just which piece of glass she wanted for the background. She was hunting and hunting through her scraps, and finally said, “Please, God, you have to help me find this!” She says she immediately felt God saying, “What do you have in your hand?” She looked down, and recognized the piece in her hand was even more perfect than the one she’d had in mind—it even had ripples, like water!

This is also the first piece where she began to engrave under her name, “Soli Deo Gloria,” which she now puts on all her pieces. It is, of course, Latin for Solely to the Glory of God, and of it Davidson says, “It’s my ‘quality control.’ Anything that has His name on it has to be my best work!” 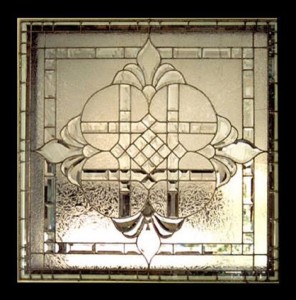 Another answer to prayer came with her second commission. She was asked to create a set which included lights over a door and down both sides. The sidelights were so tall that they would require the leading to be stabilized by zinc, which is stronger. So, for the first time, Virginia bought a spool of zinc. It looked a little funny, so she asked the sellers if it was all right. “Oh, yes,” they assured her, “it’s fine!”

Well, it wasn’t fine. It was oxidized, which would make it unusable. Virginia tried cleaning it with several different things, but was in despair when she asked God what to do. The instant idea in her mind was “Whink,” a serious rust and iron stain remover she had in her cleaning supplies. It worked in seconds, and her commission came out beautiful, as you can see from this square transom that is part of the set.

When Virginia was a girl, the school’s idea of art was to have the kids print memory verses on 3 x 5 cards in different colors of colored pencil. They would tack these up on the walls. One day, Virginia had an epiphany. “I realized I knew they were there but they were ugly to my senses, so I subconsciously tried not to see them. So the difficult lesson for me was, if something is ugly, I’m going to try not to see it. If I want something to be significant in my life, then I should put it into a piece of art that I’m going to enjoy, that my eyes will be drawn to. So way back then, as a freshman, a phrase from Ellen White gripped me: “Real greatness can dispense with outward show.”

“As a kid, I was very show-offy, without the inhibitions other kids had, and not at all like the demure girl I was supposed to be. This quote gripped me and made me realize, I don’t need to be a show-off. I want to be great—really great, but I don’t have to be a show-off in order for people to see it. Jesus said let your light shine, he didn’t say make it shine. So for years, I asked myself, what medium did I want to use, to make this so I could have it on my wall and it would really keep my attention.”

Years later, after learning to do sandblasting on Plexiglas, she began to use sandblasting on mirrors, which she says was an important transition to becoming comfortable with glass for the works she creates today. She made this quote for her own house—and for her own heart. 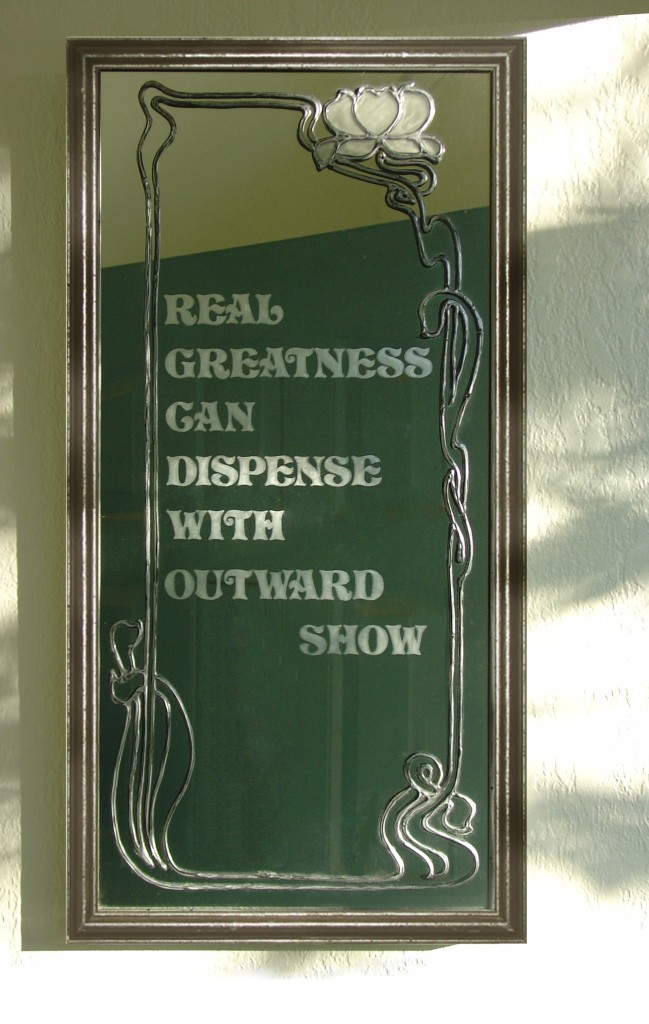 To see more of Virginia’s work, to order any, or to order your ampersand (Women & Men Serving Together) lapel pin or brooch, visit her website.