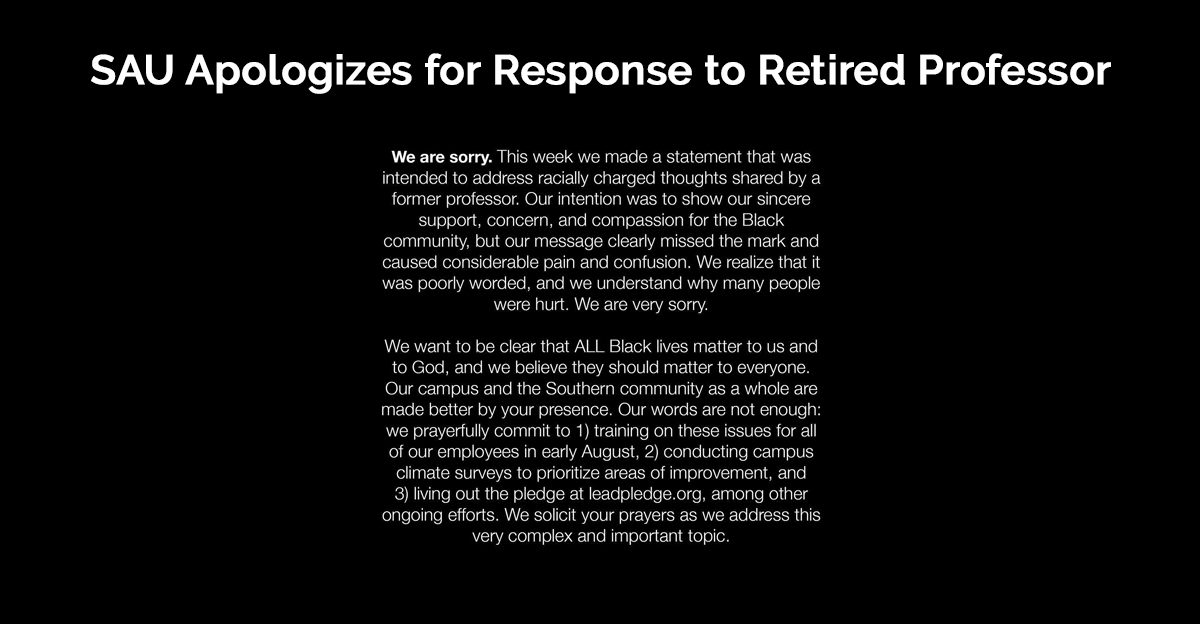 On July 17, Southern Adventist University posted an apology on its social media accounts expressing regret for its response to concerns about a “racially charged” article publicly posted on Facebook by one of its retired professors, Carlos Martin.

Martin criticized Adventist involvement in social justice efforts against racism, decried all protests, and described collaboration with Black Lives Matter as a tool to create a communist revolution. He called for addressing what he identified as the Black community’s real needs: “true liberation from drugs, violence, and promiscuity.” He added, “Giving them money so they don’t need to work will not make them better, it will make them worse.” (Part 1, Part 2)

We are sorry. This week we made a statement that was intended to address racially charged thoughts shared by a former professor. Our intention was to show our sincere support, concern, and compassion for the Black community, but our message clearly missed the mark and caused considerable pain and confusion. We realize that it was poorly worded, and why many people were hurt. We are very sorry.

We want to be clear that ALL Black lives matter to us and to God, and we believe they should matter to everyone. Our campus and the Southern community as a whole are made better by your presence. Our words are not enough: we prayerfully commit to 1) training on these issues for all of employees in early August, 2) conducting campus climate surveys to prioritize areas of improvement, and 3) and living out the pledge at pledge.org, among other ongoing efforts. We solicit your prayers as we address this very complex and important topic.