So That’s Who I Am, by Chauncey Smith 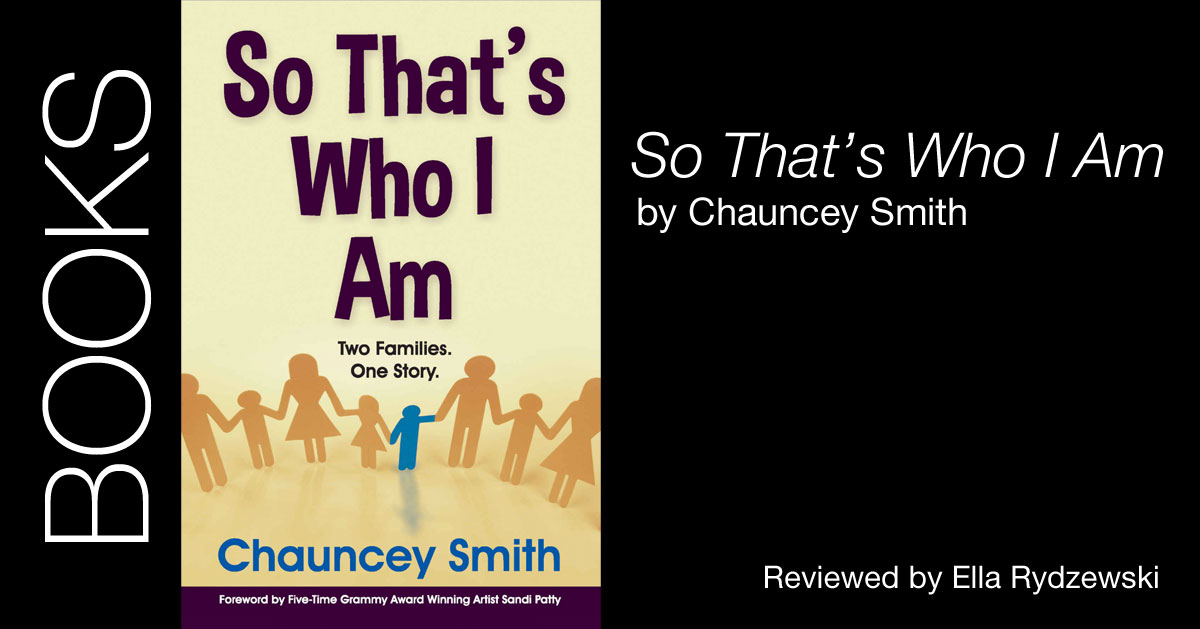 Christian singer Sandi Patty introduces this story of one man’s search for his biological mother. Her friendship with the author goes back twenty years to when she and her husband consulted him about adopting a child.

Chapter one opens with Chauncey flying into the Chicago airport and meeting his mother for the first time. As in most of his story, we hear the anticipation, doubt, fear and a myriad of feelings expressed by the emotional Chauncey.  Being a charismatic individual he shares his experience with other passengers, and they too become excited for him. One traveler films the first meeting between him and Loretta, his biological mother.

From there the book backtracks to the mixed feelings Chauncey goes through in making his decision to find Loretta. Bina, a long-time friend, helps him with the research and her fascination for the project spreads to the reader as we wait for the results. Bina finds Loretta and, after an initial denial, she calls back ready to meet her son. But Chancey is left wondering if he is really ready. For much of his life he has often “forgotten” being adopted and blended into his family, which is made up of one “real” brother (born to the adoptive parents), and a sister also adopted.  But, as he tells it, “Adopted people feel different even with loving and caring parents—not better or worse, just different.”

At one point the writer interrupts his adoption story and goes into biography. He tells at length of his teenage years as friends with the General Hospital television staff. One day Chauncey inserts himself into the group as they play softball, and they accept him as part of their circle. Through them he enters the Hollywood scene in his younger years, much to the chagrin of his Adventist family.

Chauncey meets his biological mother’s family when he is in his early thirties and over time becomes integrated into their lives. He expresses the thrill of being with people who look like him and noticing their similarities. His fear of hurting his adopted parents is unfounded, and they seem happy for him. He is overjoyed when his two moms meet.

But looking for biological parents does not always end in such completeness. He also finds his father who, though not rejecting him, cannot make the plunge to meet because of his wife’s opposition. Chauncey urges his sister to find her mother, and this also does not turn out well. But the worst scenario happens to a friend who refuses to find his adoptive parents.

The story jumps around a bit and doesn’t always flow well, but neither does life. No matter where it leads, the writer believes making the search is a wise decision. He writes his story for those who have been adopted. He lets them know their complex feelings are not unique, and we all need to know where we came from. This reminds me of the recent popularity of genealogical studies and DNA tests.

Though recommended for readers in adopted families, I feel one would need to know a person well before giving them this volume. Such sharing could possibly backfire if an adopted person has not expressed an interest in finding their biological family. I would recommend it for those considering adoption.

After I read the last page, to me Chauncey’s story was not complete. He makes no mention of his current status—is he married? Does he have children of his own? What is his occupation?  The only clue is found in the acknowledgements where he refers to the Faith For Today and Lifestyle Magazine Team as “my work family.”

You can purchase So That’s Who I Am at Amazon by clicking here.