Signs of All Times: What About the Middle East? 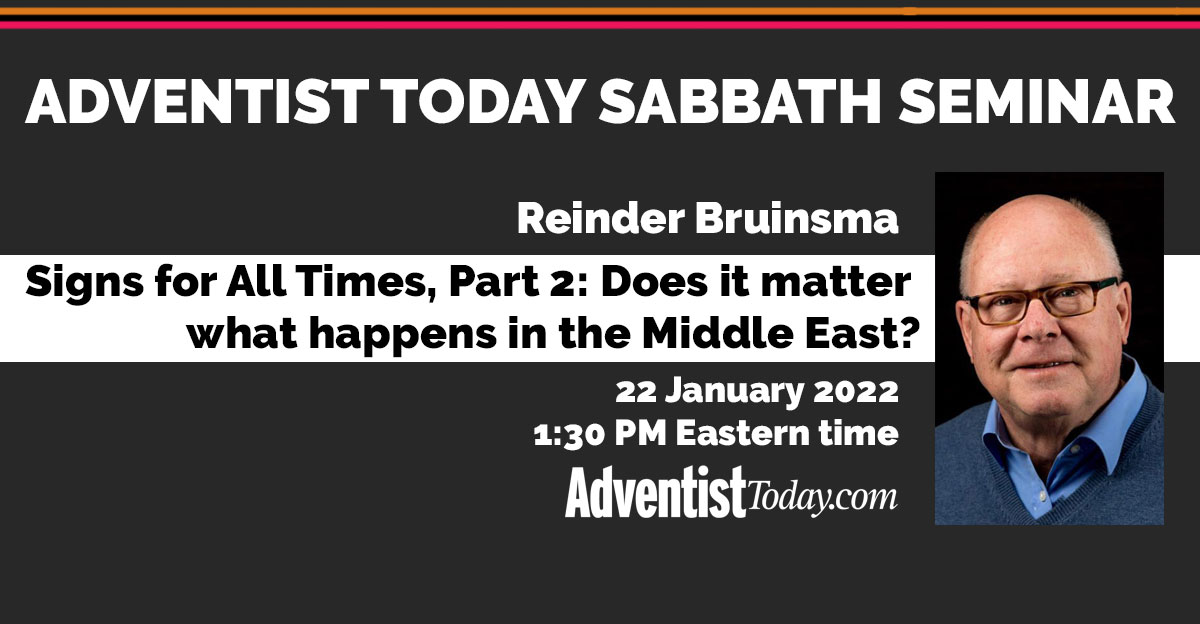 Should we connect prophecies and signs with specific historical events? We will look at particular on events in the Middle East, the tensions between West and East and on the question of whether the establishment of the state of Israel has any end-of-time significance.

To read for this class:

Excerpt from Dr. Bruinsma’s soon-to-be published book, He Comes: Why, When and How Jesus Will Return, pp. 111-113

The key for interpreting the prophecies that concern the end of time is found in what happened in 1948, when the Jewish state was established. Hal Lindsey assures his readers that on that very day all the biblical predictions about a future restoration of Israel were fulfilled. This momentous event, he said, marked the beginning of the final phase of human history, which will end with the Second Coming of Christ. Israel is at the center of everything that takes place in this final phase. Lindsey paints a picture of what is going to happen in the Middle East, with most of his information coming from the book of Revelation, the chapters 7-12 of the book of Daniel, and the book of Ezekiel chapters 38 and 39. The prophet Ezekiel mentions a powerful leader named Gog, “of the land of Magog, the chief prince of Meshech and Tubal” (38:2). Lindsey identified Magog as Russia, which, he believed, would play a sinister in role in attacking Israel. But he also found clues in the prophetic passages about other powers that are also intent on destroying Israel: Egypt, China, and the EU as the heir of the Roman Empire.

A pivotal role in all these military activities is the Antichrist, who is most fully described in Revelation 13. This person, whom Lindsey refers to as the “Future Fuehrer,” will be extremely powerful and will demand worship from all people. The refusal to do so will lead to merciless persecution. “The dramatic elements which are occurring in the world today are setting the stage for this magnetic, diabolical Future Fuehrer to make his entry.”

Some of what Lindsay wrote fifty years ago, now seems rather dated and quite improbable. Lindsay himself acknowledged in later books that many things developed differently from what he thought. Few evangelicals now emphasize the prophetic role of Russia in the way they did when the Cold War was at its height. But one thing remains a permanent element: the crucial role of the State of Israel in the end-time scenario. Just do a Google search on the internet and you can find a great number of detailed schedules with time-lines of the final events, proposed by dispensationalist evangelicals. In all of these Israel plays a key role. Chief rabbi Yaakov Ariel (b. 1937) offers an interesting Jewish perspective. He finds it extraordinary that members of one religious community (evangelicals) have concluded “that another country and its religious community (Jews in the State of Israel) play an essential role in God’s plan for human redemption and will do everything in their power to make that country and people act in accordance with their last-days scenario.”

Compare the evangelical position with a statement by the renowned Dutch theology professor G. Chr. Aalders (1880-1961), less than a year after the State of Israel had been established: “Whatever has happened in Palestine, and whatever may happen in the future, it has nothing to do with the divine prophecies which we find in the Holy Scriptures.” So, who is correct? Lindsey and all those evangelical authors who point to establishment of the State of Israel as the most prominent sign of the times, or Aalders and most theologians in so-called “mainline” denominations, who deny any connection between events in Palestine and the Second Coming of Christ?

Raj Attiken is an adjunct professor at Kettering College and retired president of the Ohio Conference.

Watch the recording of the class here.