You’ve heard the story: the one about the devoted shepherd who watches over the sheep, looks for the lost ones, bottle feeds the abandoned lambs, the shepherd whose gentle voice and calming presence make the sheep feel secure. With such a shepherd, sheep (not known for their intelligence or their confidence) willingly enter strange pens or chutes—even submit to scary things like shots and shearing.

You’ve heard the story. You just haven’t heard of the good shepherd as a grade school girl. 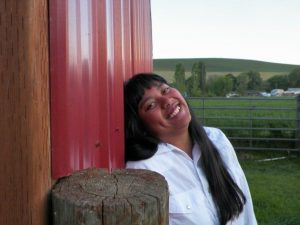 Shilo Stolz, age 19 at this writing, has two nicknames. Her friends and family call her Shi (pronounced Shy). It’s short for her name, but it’s also a descriptor. Shilo has been a quiet, shy person for much of her life, including when she first went to Walla Walla Valley Academy. Her other nickname is “the sheep whisperer,” because since childhood she could get the family’s Painted Desert Sheep to do pretty much whatever she wanted.

“She has this really calm spirit,” her mother, Gail Stolz, told AToday. “We would say, ‘Do you think you can go get the sheep?’ and she would go out there, and I don’t know what she would do, but she would get 25 or 30 head of sheep into the pen for immunizations or whatever we needed… She has fed many baby sheep with a bottle; she would find lost ones, or twins or triplets not accepted by their mothers, and she’d raise them. So she not only has the gift of wisdom to work with them, but also the grace to know when they need help.”

Shilo didn’t start out in an environment that would have encouraged this kind of spirit. She was born in extreme poverty and neglect in the Marshall Islands. And Gail and Milo Stolz didn’t set out to adopt an overseas baby, either. It seems to have been God’s idea from the outset.

“In September, 1996,” Gail Stolz explained, “we got call from a friend in the Marshall Islands. Someone had asked her if she knew anyone that would like to adopt a little girl who was not being taken care of and needed a family.” The Stolzes, who already had a ten-year-old son, were surprised to be the ones to receive such a call, but after “much discussion and prayer, we were like, wow, the Lord’s calling us to do this!”

Working out the adoption was a long and complicated process including things like finding a Marshallese attorney and submitting to FBI background checks because they would have to go through a US missile range which guards some Top Secret information. In fact, in November, when Gail went there while Milo stayed home with their son, she had to go back to the nearby island with the baby every night. Why? The baby, seven months old and weighing only eleven pounds (about 5 kilos), was not a US citizen because the adoption was not finalized, so she was not allowed on the missile base.

After five days, Gail got her prospective daughter to the high court in the Marshall Islands capital city of Majuro, where the adoption was finalized.

And so the little sheep whisperer began to grow up as an American girl (Shilo has dual citizenship in the US and the Marshall Islands). At Walla Walla Valley Academy, despite the growing confidence that learning to be a “sheep whisperer” had brought her, Shilo had her difficulties but with the guidance of fantastic teachers who helped her grow into a young adult, Shilo became known as a deeply loyal friend and one who would “give the shirt off her back” to those she loved.

Still, everyone who knew Shilo was astonished when she chose to be a Week of Prayer speaker during her senior year (2014-15).

Gail explained: “I think because she was so shy, she felt the need to tell her story. So she was one of the speakers, which amazed everyone. We were there, and when she got up front, she was really quiet. We thought, “Oh, no, can she do this?’ But she told the story of her adoption and all the mixed feelings that brought. She described her walk with God. The year before, she’d lost one of favorite teachers from cancer and she was very angry with God. She shared how she got through that and realized that God had plan for her life. She said how lucky she feels to be adopted—she probably wouldn’t have survived if she’d stayed in the Marshall Islands. Instead, she has loving parents, security, the farm… People were just speechless. Many students actually came to see the school counselor because Shilo sharing her story brought out their feelings and stories, too.”

The story didn’t end there. Every school year, the local Walla Walla Noon Rotary Club offers one $1,000 scholarship to a student selected by his or her teachers for having made the most improvement, overcome the most hurdles and adversity, come the furthest; in other words, an outstanding student, but not necessarily or only scholastically. Shilo’s teachers chose her.

She had to go to the Rotary Club meeting and accept the scholarship, and “she did a great job” of that, too, says her mother. “She can use the scholarship for any school of her choice, but she’s still trying to figure out what she wants to do with her life.”

Meanwhile, besides whispering to the sheep, Shilo loves riding her motorcycle, and does a lot of volunteering, from Pathfinders to a veterinarian’s clinic.

Gail gave a last testimonial to the influence her quiet daughter has. Last spring, a student died in an accident and a teacher had to get up and talk about it. “She didn’t think she could do it,” Gail said. “But she thought if Shilo could, she could. She got courage by thinking of Shilo.”

That’s a mighty influence. Adventist Today salutes Shilo Stolz and offers a blessing on her continued path with the God who has brought her this far on an amazing journey.