“Roll Over and Play Dead” – General Conference to the Conferences 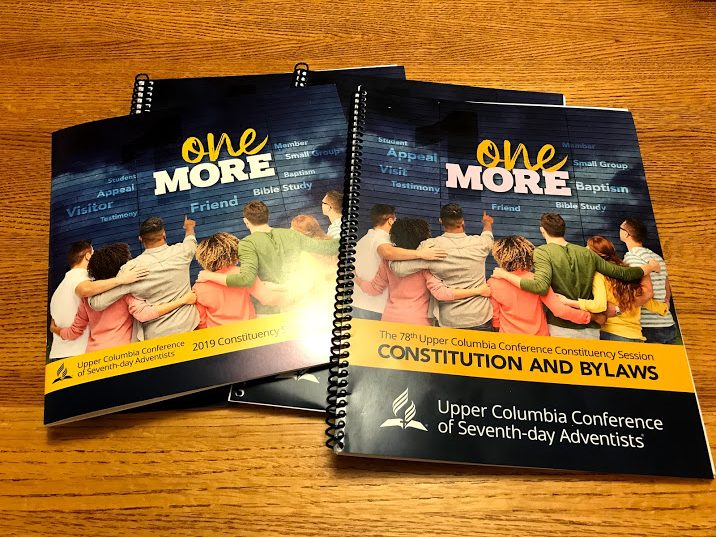 I am a lifelong member of the Seventh-day Adventist church, an ordained elder, a Sabbath School teacher. I am also a delegate from my church to the September 15, 2019, Constituency Session of the Upper Columbia Conference (UCC) of Seventh-day Adventists. I am asking questions raised by 1 pound and 10 ounces of printed information I just received. It is attractively printed, overwhelming in size, and likely important to the denomination we members leave to our children and grandchildren.

As I waded through the information provided, it became clearer and clearer that what was happening in my UCC conference was likely happening in all conferences. The local members, from their local churches, in their local conferences are being told by distant church administrators, to “roll over and play dead!”– the command I used to try and teach my faithful dog. On command the dog would drop heavily to its side, put its paws up in the air, relax its body, until it was told, “Good dog; up now!”

What the GC Wants

The source of the command being given is not hidden; it is clearly a directive from the General Conference (GC) administrators, through the North American Division (NAD), and the North Pacific Union Conference (NPUC), to the church members who are delegates for the Session of the Upper Columbia Conference – we asked you before to change your constitution to what we want; you haven’t done it. So now you must change your constitution, so that the General Conference can legally take control of your conference. “Roll over and play dead!” Accept the GC Model Constitution. Now.

You see, the UCC has a Constitution and Bylaws, it was adopted September 2, 1926; it has been amended and brought up to date 19 times – most recently May 31, 2015 – to express the will of the members and their churches in this conference. However, this Constitution does not acknowledge that the members and churches in our territory submit to being controlled by entities and administrators outside of the conference. It suggests the UCC is composed by and responsible to – not administrators from the General Conference or their subsidiary organization – but by and to the members in their “churches as are or may be organized in any part of its territory.”

The same Article and Section notes that if the conference president and vice president are dead or disabled, a meeting of the conference Executive Committee can be called “in conformity with the Working Policy of the General Conference…” The same policies are mentioned  only once more three pages later. That’s all!

Our existing constitution of the UCC considers the union, division, and GC as subsidiary SDA organizations; they offer us services such as auditing, and policies to use if our president and vice president die. This seems not nearly enough for the present GC president and his team. They want legal control of the conferences, so they need a new constitution giving them that control. So now they are directing church members to vote them control.

This appears immediately on the first pages of their demanded changes. They spell out a brand new “ARTICLE III—Relationships” to the constitution which repurposes the UCC as merely “a member unit of the NPUC…located in the territory of the General Conference of Seventh-day Adventists NAD…”  (They never legally owned the conference before; the new constitution lets them claim this territory as theirs.)

Here are some examples of the extent proposed for this “power grab.” (Page numbers refer to delegates’ booklets, for any who may read this article.)

How GC Will Control

Q:  Are we willing to remove authority and control of church functions and doctrines from members in this conference to a distant body from our organization not under our control?

4. (Page 46) Repeats“it shall be the duty of the churches in the Conference to adopt the tithing system of the Bible.” [One wonders how the Byzantine complexity of the GC tithing policies at all related to any supposed “tithing system of the Bible”?]   But what is new in their “Model Constitution” is that it (Page 45) gives the GC, not the local conference, the authority to set how much of our tithes they are to be given. How nice for them.

5. (Page 48) Redefines a church member “in regular standing” (thereby able to participate in church governance) as a “faithful supporter of their local church through tithes and offerings.” This elevates tithing from a privilege of membership to an obligation for membership.

What UCC Sends to GC Organizations

Q: Are we constituents satisfied with a structure that sends 26% of our tithe (or 15% of our combined tithes, offerings, summer camp fees, local pastor support, wills and trusts, and church school tuition dollars) to support the present administrative-heavy structure of our church? Why should more than 10% of our tithes and offerings go out of this conference?[2]

What Has Not Been Fixed

Equally unsatisfactory is what remains unstated in the present or the proposed GC Model Constitution.

What is happening in your local conference?   In June 2019 the Dakota Conference voted to remove all the wording inserted from the General Conference “Model Constitution” out of their conference’s legal document.[3]  Their president explained they were following the Spirit of Prophecy counsel to NOT let the GC control the work of the conferences.[4]

I’ll be voting no on the changes being demanded by the General Conference of Seventh-day Adventists of our conference. I consider it a power grab that is not healthy for the members or churches or pastors or administrators of the Upper Columbia Conference. The foundational Adventist principle of freedom of conscience from external coercion and control is involved in this attempt to force a conference to submit to GC control of faith, practice, funds. I’ll paraphrase:

Jesus said to the people who believed in him, “You are truly my disciples if you remain faithful to my teachings.
And you will know the truth, and the truth will set you free.”
“But we are descendants of James and Ellen White,” they said. “We have never been slaves to anyone.
What do you mean, ‘You will be set free’?”
Jesus replied, “I tell you the truth, …if the Son sets you free, you are truly free.”

So Christ has truly set us free. Now make sure that you stay free,
and don’t get tied up again in slavery to the General Conference. 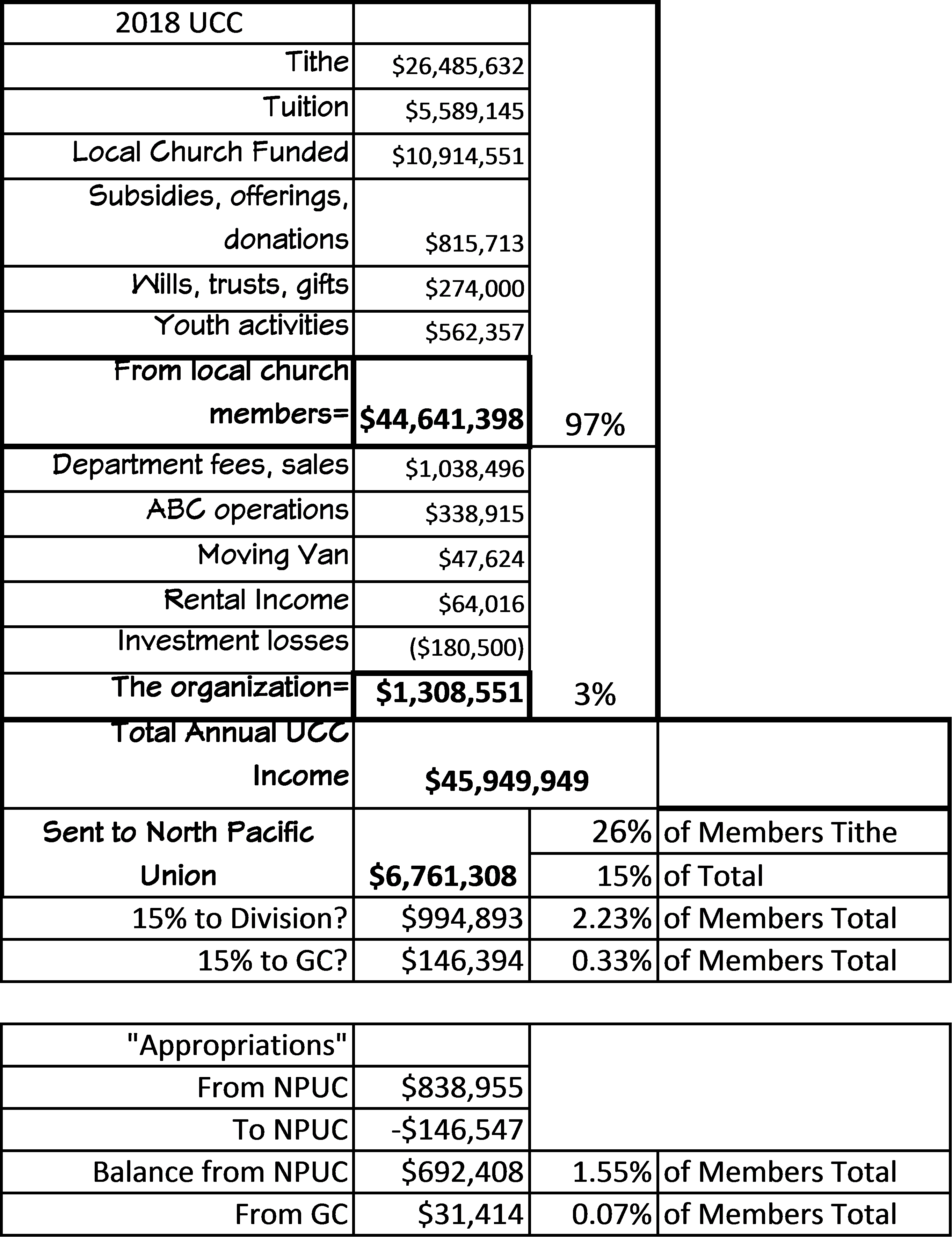 [2] For example, in 2019, if instead of 15% of total UCC income, they limited their support of the overhead organizations to 10%, they would have enough extra money to lower church school tuition by 10% and increase teachers’ wages and benefits by 9% at the same time.

[4] In 1903, Ellen White was in the midst of such conflict when she wrote, “There is need of a most earnest, thorough work to be carried forward now in all our churches.  We are now to understand whether all our printing plants and all our sanitariums are to be under the control of the General Conference.  I answer, ‘Nay.’  It has been a necessity to organize union conferences, that the General Conference shall not exercise dictation over all the separate conferences.”  Ellen G. White, Letters and Manuscripts–Vol 18, MS 26, 1903, par. 1.