Pursuing Truth in a Post-Truth World 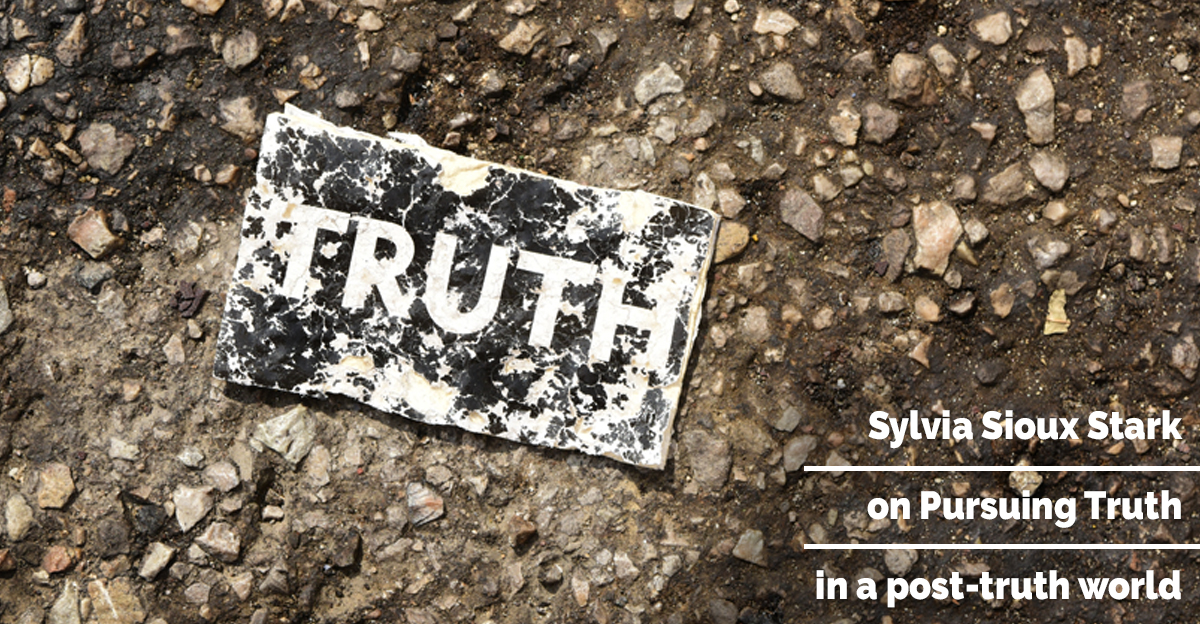 I must have walked up on a heated political discussion. It was a handful of salt-of-the-earth-looking kind of folks—although unmasked and not socially distanced. They looked like the workaday kind of people one should feel comfortable sitting down with and passing the time of day. Though I hadn’t done it intentionally, I guess they thought I had inclined an ear in their direction. “Hey, young lady,” called out an old-timer. “Who did you vote for in this past election?”

“Well, that’s kind of personal, don’t you think?” I said. “But I’ll tell you what my values are: I value honesty. I value respect. I value a moral life. And, among other things, I believe in doing what we can to help the disadvantaged and disenfranchised and others who may be held down by circumstances beyond their control. I believe in helping those who are fleeing violence in their own countries, or even just looking for a better life for their families. I love our planet, and I want us all, in whatever capacity, on a personal or national level, to start taking better care of it. I believe in science, and the pandemic we’re in highlights the need that everyone who needs medical care should be able to see a doctor.”

As I spoke, I noticed a guarded distrustfulness coming over their faces. I was making them uncomfortable.

What? Aren’t those values that all my godly, church-going neighbors should hold dear? Whether friends or family, or merely casual acquaintances, if we don’t hold the values in common that are good for the whole human family, do we really have anything of consequence binding us together? If we are not working toward the common goal of lifting up “the least of these,” do we really have anything to share with our unchurched friends and family? How are we fulfilling the purpose for which God set us in this world? And how can we fulfill Christ’s commission to take the gospel to the world and merit His approval, when it’s all said and done, if we have a religion that excludes the most needy?

The year of social isolation necessitated by the COVID-19 pandemic has caused me, as it has many, to search for ways to remain connected to those we love. Yet doing so had already been made difficult by the prevailing political division of the previous few years, a crisis brought on, in part, by the rejection of the American value of welcoming immigrants and refugees, by the racial divide, and by the steep decline of truth in the interest of political power—not only among civic and national leaders, but in the religious world, as well. The alliance of a few within my own church with the cause of white evangelicals in legislating a misguided and apostate Christianity is alarming.

Having been given the opportunity and permission to exhibit some of the worst instincts of the unsanctified human nature, they laid bare a fundamental faultline into which a very many of our neighbors, family, and fellow church members have stumbled—or, in some cases, have chosen.

I was on a long road trip a couple years ago with a family member, someone active in and a leader of their church, who stated that immigrants should be shot as they come across the border. I was so taken aback by this pronouncement I didn’t think to ask if they would be willing to pull the trigger. I guess it was just as well to let it go, because we still had a long way to travel together.

Social media has been a factor in causing some formerly close ties to be broken. I have been attacked, in personal ways, by long-time friends and fellow church members, just for speaking up for the children and parents at the southern border, merely for saying we should treat them in a Christlike manner, like giving them clean water to drink. Some have even made the argument that it’s necessary to treat them badly, or this country would be overrun by those not like us.

But, thankfully, this crisis of morals has brought some of us closer together, even though we’ve not met one another in person.

An inability to recognize truth, or of having any interest in impartially seeking truth, has led to alienation in many formerly close circles. In earlier, less polarized times, I got comfort from meeting, studying, and praying with my church family. I felt in one accord with them, believing we were all seeking the truth of Jesus, who said, “I am the Way, the Truth, and the Life.”

If we seek a closer walk with the embodiment of truth, it will naturally follow that we will come closer to recognizing truth. Pilate, at the sham trial of Jesus, asked the question, “What is truth?” but turned away before receiving an answer. The answer would not have fit with his ambition of retaining and strengthening his political power.

That may also be the reason many are embracing the rampant lies and conspiracy theories so prevalent everywhere one turns.

I’m looking forward to looking backward on the COVID-19 pandemic, although I am feeling a lot of uncertainty about how my life will change after having become so accustomed to more than a year of isolation. I have learned a lot about staying in touch and strengthening relationships with acquaintances in my community that were flagging and could have died away without my making the extra effort to reach out to them. Taking them homemade baked goods and standing outside their doors, talking about our lives in a changed world, and encouraging them to keep trusting in the Lord, has blessed me also.

These precious people have also been added to my prayer list. Could this perhaps be one reason God has allowed this disease to sweep the world: to see who would direct their gaze away from themselves and share Him with others—He who is the only standard for truth in a world built on a crumbling infrastructure of lies?

Where does one turn when this pandemic subsides and it’s finally relatively safe to worship corporately again? I am fortunate to live in a part of the country easily accessible to many wild natural areas, and have been spending Sabbaths meeting with my Creator in His outdoor cathedral, rain or shine, cold or heat. Meeting alone with God in nature can attune our hearts to hear Him speak His love to us. It’s been invigorating to my relationship with Him. But meeting with His other like-minded children and coming into accord with a family of believers is a command (Hebrews 10:25) and an important part of spiritual growth, as we draw closer to Jesus’ second coming. It’s meant to strengthen us as we see that day approaching.

But—and I’m pretty sure I’m not alone in this—I wonder how we will come into accord with those who seem to have been unwilling to seek out truth, and, in fact, have made lies a weapon that has discouraged unity in faith?

In this post-truth era I have more questions than answers as I try to plot my way forward. I know only one standard for truth, and that is the One who is the Truth. To look upon Jesus, to study His love toward all, to cooperate with Him in His efforts, to teach me to emulate His character: this is the true way forward. I simply pray for faith to follow.

Where such a course will take me, I cannot see. But I have confidence that where it leads me in the end is exactly where I eternally want to be.

Sylvia Sioux Stark is an artist and lone wanderer in the east Tennessee hills.