Preparing for a Time of Trouble?

by Edwin A. Schwisow, November 12, 2014:    As we draw nearer to General Conference Session in San Antonio, we hear graphic predictions that the Church is in danger of splitting, and solemn avowals that ordaining women could be like throwing the Church off a rock wall—shattering it beyond repair.

The Church is in danger! it’s said. And we should be very afraid.

But that’s not all. To avoid further disaster, we’re told it’s imperative that we vote a tightly drawn, fundamentally literalist interpretation of the Genesis creation story, for all to believe, lest the Church fall victim to wholesale revisionism! And for those with even a slightly different interpretation of Genesis? Well, there would be, perhaps, the “Just Say Go” program. A few weeks ago we heard strong sentiments to this effect directed at teachers by none other than our world President, Pastor Ted Wilson. 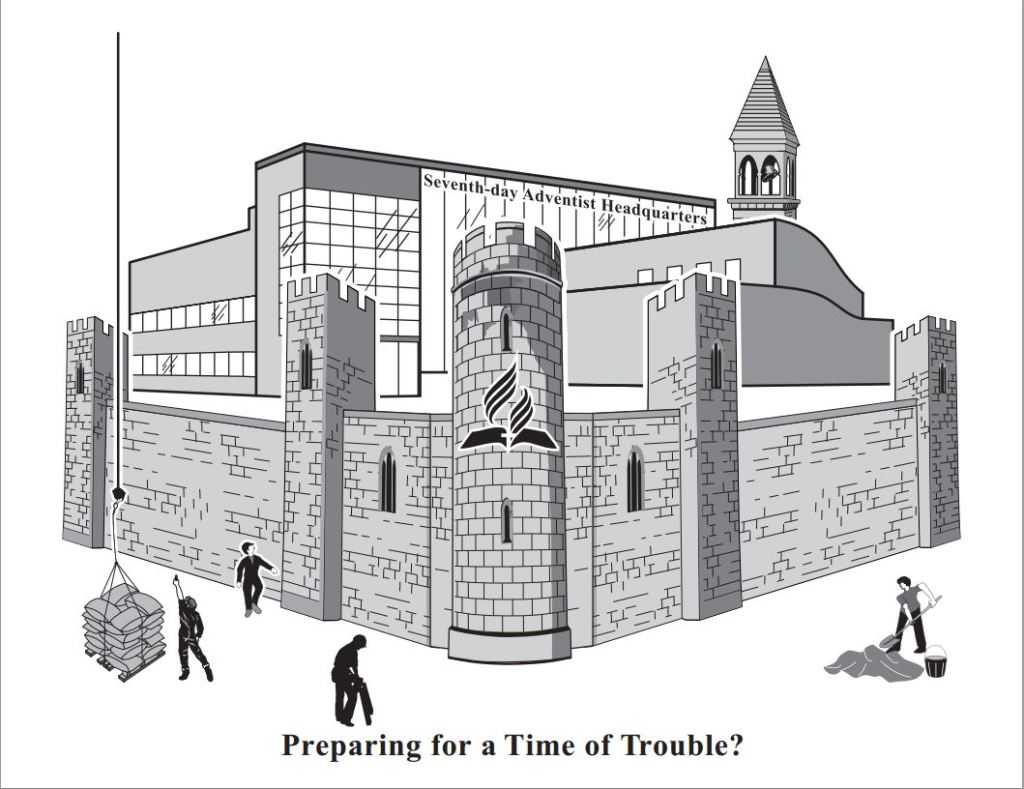 So it occurs to me with tongue partially in cheek that in the nine remaining months before what surely will be one of the hottest General Conference sessions in history, some remodeling may be in order at the 23-year-old world headquarters building (see rough sketch above). The design is acceptably conservative (even medieval, though as a mere journalist, I am not top-rank in critiquing historical architecture). There would also be specially reinforced sections to hold petitioners whose employment status is on appeal; a room for filing whistle-blower information confidentially and for a witness-protection plan; and libraries to hold documents that support the measures voted in San Antonio.

This may sound silly, but stay with me.  Audacious plans call for audacious symbolism, especially as we contemplate a Time of Trouble in San Antonio. But maybe there’s something we can do before that has a chance to happen.

The urgent move to accept a single, closely-worded, narrow interpretation on Genesis as a general position for all worldwide members is particularly troubling, because from the beginning (historically) we have been a Church very shy of presidential power (Number One), especially when combined with strong, creedal positions on subsidiary matters of faith (Number Two). We have feared top-down traditionalism that tells us exactly how we must believe. Our Church has drawn up purposely inclusive doctrinal positions on a number of topics to allow various regions of the Church to adjust in their own, unique ways, to cultural demands in proclamation. For example, the Middle East is undoubtedly a region of the world where immediately implementing wide-scale women’s ordination could be a stumbling block. Likewise, imposing a stringently literalist interpretation on First World teachers, pastors, and evangelists would seriously impact our ability to reach educated, young metro types.

As I have through the years discussed the Bible and Adventism with young, highly educated universitarians, one of the first questions they ask is, “Ed, does your Church demand that you believe in an absolutely literal interpretation of Genesis?”

For the past 35 years I have been able to say, “No, but we do hold without reservation that God created the world. And yes, there’s room for interpretation and study on what exactly took place.” Their faces relax and they nod, “Okay, just wanted to make sure, because we had an Adventist neighbor who insisted that his beliefs on Genesis were absolutely correct. I could simply not discuss matters of faith with him.”

Likewise, my youthful Bible students have often asked me about the Church’s position on women in ministry.  Being well-informed, they know it’s a hot topic, and they want to know.  They are not prepared to take seriously a Church that discriminates against people based on the restroom facilities they happen to find most useful. Could we say that the door to conversation slams shut as quickly as the “Occupied” sign on a lavatory door during class break?

So We Have a Problem or Two

The primary problem we have as we face these potentially Church-shattering issues in San Antonio is a question of information and trust. It has become popular in today’s Internet world for progressives to paint conservatives in the darkest of diabolical hues; likewise, for conservatives to attribute the opinions of progressives to unspeakably sinister agendas. Providing careful historical and background information is the only way to cast light on the ramifications of strongly divergent positions.

Here’s what Adventist Today (AT) is doing to foster that kind of dialogue:

(1)    Adventist Today is preparing to distribute worldwide a pre-Session special issue to all subscribers and to the pastors and officials in those union conferences that request it. It will also make copies available to delegates at the Session itself.  It will be colorful and engaging, looking at major issues, including the ones mentioned here. The costs will be in the five figures, and it will be extra-rich in content. It will not be inexpensive to produce, but the cost to the Church of not doing so will be even greater. People expect AT to provide guidance at all phases of our preparation for the Session, and more and more non-North American readers from developing nations are turning to AT for credible, unbiased reporting on hot topics.

(2)    Adventist Today is completing (as I write) a new and expanded Web site, at considerable expense, to handle the burgeoning traffic as we move toward San Antonio. The old site is seriously underpowered for the upcoming task.

(3)     Adventist Today is sending four seasoned reporters to the Session, who will be filing stories throughout the Session, providing on-the-spot analysis and coverage.

(4)    Adventist Today will be filing stories based on interviews and other newsgathering resources not available through other Adventist-associated media. The AT Web site has a very high level of visitor-ship, perhaps the highest in the denomination at this time.

(5)    Adventist Today will publish a wrap-up of the General Conference Session and the implications of actions passed, or defeated, as we survey the road ahead for the Church.

(6)    Adventist Today will pay particular attention to the slate of officers voted at the Session, with early analysis of prospects ahead under their stewardship.

The Challenge This Autumn

As we enter the autumn season, moving toward the Session in less than nine months, Adventist Today seriously must raise approximately $30,000 extra to underwrite the reportorial expenses associated with the Session.

It may surprise you that the total (normal) annual budget of Adventist Today is about the same as the costs associated with the salary and benefits of just one conference pastor or worker. That’s because Adventist Today owns no real estate, has no salaried administrators, clerks, secretaries, or reporters, and operates solely with stipendiary, contract, and volunteer help. It would instill great confidence in our team if we could raise $25,000 between now and November 30 ($19,500 already raised) to help us continue moving forward, publishing a blockbuster issue for World consumption prior to GC Session.

And when that happens, and all is said and done, I hope we can trash my medieval file of sketches as we plan to confidently move forward as a Church, no longer in extremis and fearful for the future, but confident and flexible as the historic founders clearly wanted us to be In the Beginning…..

To make a donation, go to:  https://www.atodayarchive.org/transaction_donation.php