Playing Hopscotch with Our Liberties 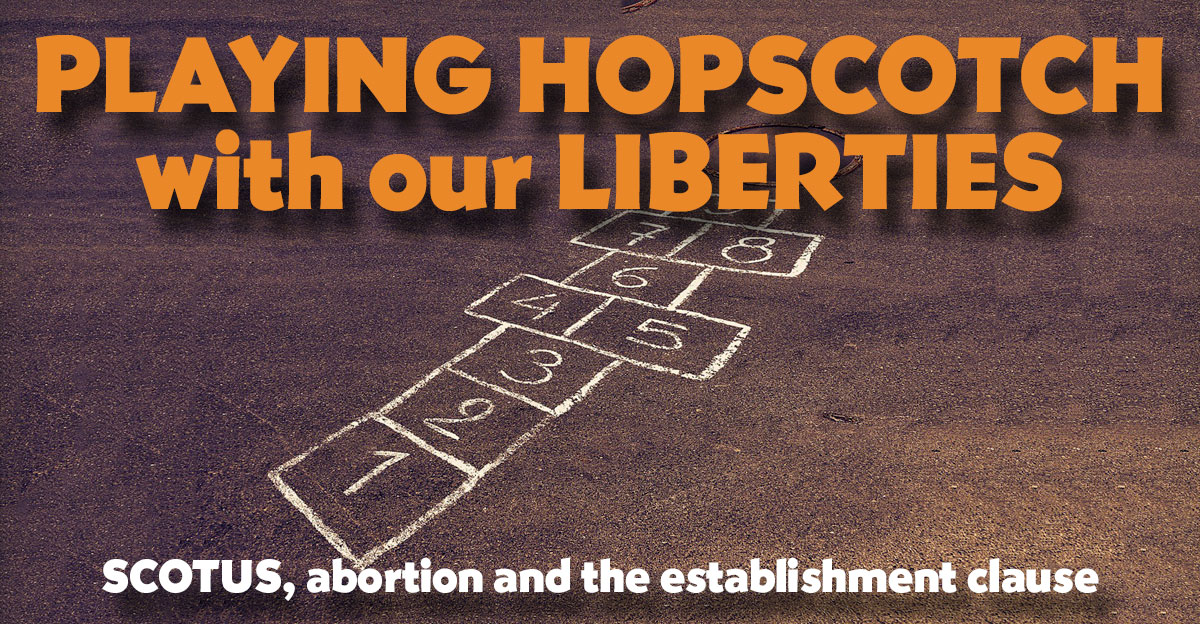 In the last few months, I’ve seen and heard countless comments about abortion rights, from both sides. But almost no one is talking about religious liberty in relation to this issue.

I was raised in the Adventist school system which was then strongly opposed to government intervention in religious schools or churches—or legislatures. Separation of church and state was drummed into our student brains six days a week. Heaven forbid the government should decide which day we went to church, worked, or washed our car.

However, when it comes to government allied with a political party that is pro-school prayer or pro-prayer in a legislature, pro-Ten Commandments monuments, pro-tax credits for the Noah’s Ark attraction, anti-LGBT, anti-abortion choice, for using tuition vouchers in Christian schools, enlisting to fight in the military, or endorsing the death penalty, it has been easy for some to relax vigilance for political or moral items they personally approved of.

Let’s go back to the most recent battle in the US Supreme Court: abortion.

Across hundreds of religions and sects in our pluralistic nation of 330 million people, there are many beliefs about when human life begins: at conception, at 6 weeks, 12 or 15 weeks, at heartbeat, at viability, at second or third trimester, or at birth when breath is drawn. (In Arizona, the legislature, in cooperation with a religious lobbyist, decided that life begins at ovulation, before a woman is inseminated.) Even those without religious beliefs have an ideology about life’s beginning or end. Because we have religious liberty baked into our Constitution, until recently we and our physicians have been able to follow our conscience regarding abortion or taking a pregnancy to term.

The majority opinion of the “originalist” Court hopscotched around the Constitution and said that because the document doesn’t specifically mention abortion (nor does it mention enslaved people, women, children, the internet, or nuclear weapons), abortion rights were not guaranteed.

Then, six Catholic justices imposed and established their religious beliefs upon that pluralistic nation. The following statement is from the Catechism of the Roman Catholic Church:

Human life must be respected and protected absolutely from the moment of conception. From the first moment of his existence, a human being must be recognized as having the rights of a person – among which is the inviolable right of every innocent being to life.

Separation of church and state

“The purpose of separation of church and state is to keep forever from these shores the ceaseless strife that has soaked the soil of Europe in blood for centuries,” wrote James Madison.

Madison made the connection between a church-state regime and religious torture, death, and oppression.  He could have cited European wars that lasted for decades, the Crusades, the Inquisition, pogroms on Jews, sharia, Church of England versus Catholics, Puritans versus Church of England, Puritans against everyone else (Catholics, Jews, Quakers, Baptists, Antinomians), Catholic versus Orthodox, Muslims versus Jews, Hindus versus Muslims, Communists against Buddhists…

The marriage of religion and state has gone on for millennia and continues to the present day. It always, always results in oppression, and often in death.

The establishment clause of the First Amendment prevents the federal government from establishing a state religion. I’ve already heard that the separation of church and state is not written in the Constitution, so it’s not legitimate. Included in the new civics training for Florida public school teachers is the statement that it is a “misconception” that “the Founders desired strict separation of church and state.”

That’s the same argument given over the 2022 abortion ruling, which means that under the current Supremes majority, the establishment of religion is also at risk. That isn’t, however, what the founders of the nation taught, according to Middle Tennessee State University’s Free Speech Center:

In Everson v. Board of Education (1947), which first applied the First Amendment’s establishment clause to the states, the Supreme Court relied on [Thomas] Jefferson’s metaphor in announcing a strict standard of separation between church and state.

Justice Hugo L. Black concluded his opinion for the Court’s majority with the pronouncement that “[t]he First Amendment has erected a wall between church and state. That wall must be kept high and impregnable. We could not approve the slightest breach.”

Current Supreme Court justices feel they can be originalists about other amendments, but government establishing religion, prohibited in the First Amendment, is now fine and dandy. Public prayer in public schools is fine. Taxpayers paying religious school tuition is fine. Those who espouse those beliefs are lulled into complacency about the higher principle of government intervention in our rights.

A God of liberty

One of my employers is a Baptist church, where the senior pastor recently said that “God has spoken through the Supreme Court,” and led the congregation in singing the chorus to “Awesome God.”

I put on my poker face and remembered Roger Williams, the founder of the Baptist denomination in early colonial America, who, in the 1630s, was among the first to advocate religious liberty for all—not just for Baptists, Puritans, Jews, Catholics, or Quakers—liberty for all.

And I remember a Seventh Day Baptist minister, Nathaniel Jenkins, a member of the New Jersey legislature in 1721, speaking powerfully about a bill that would punish people for being Unitarians rather than Trinitarians. In the assembly, Jenkins declared that

…although I believe these doctrines as firmly as the warmest advocate of the bill, yet I would never consent to oppose those who rejected them with law or with any other weapon than argument.

God is a God of choice. Our God doesn’t force. Jesus said twice in the same verse that his kingdom is not of this world. If God is sovereign, God doesn’t need human soldiers to fight his battles or “take back our nation for Christ.”

Are we listening yet? Sadly, I don’t think so. We don’t want to make waves, especially when we agree with an issue like abortion or public prayer. And full disclosure, I can’t put my name on this article because I need to keep my job. But I will advocate in many arenas for liberty, because if it’s liberty only for some, it’s not liberty for all.

Sarah Kay Jones is a pseudonym for an author who provides music ministry to evangelical churches.