A spate of recent books, articles, and public statements by prominent personalities has claimed that Christians in the United States are being persecuted for their faith. The most publicized of these in recent months was the United States’ Vice President’s commencement address at Liberty University in May of this year in which he urged the graduating class to be prepared to face opposition for being Christian. Some called the speech a display of the “evangelical persecution complex.”

Incidents of religious persecution have been a part of the Christian story from its very inception. The prophets of the Old Testament were well acquainted with persecution, and the New Testament has accounts of John the Baptist, Jesus, Peter, James, John, Stephen, Paul, Silas and others being imprisoned, beaten, stoned, decapitated, and tortured to death. Persecution continued intermittently as a brutal reality through the centuries—persecution of Christians, and persecution by Christians. Christians have often viewed this as a fulfillment of Jesus’ declaration, “If they persecuted me, they will also persecute you” (John 15:20).

There are still credible reports from various parts of the world of brutal and ruthless persecution of Christians and other religious minorities, either by extremists in society, by those driven by a religious fundamentalist or Marxist-Leninist ideology, or at the hand of a state. During the week of July 15, 2019, the US State Department held what it called its second “Ministerial to Advance Religious Freedom.” The event featured about thirty persons who had been persecuted for religious reasons and their individual stories.  Those persons were from Afghanistan, Bangladesh, China, Cuba, Egypt, Eritrea, Germany, Malaysia, Iran, Iraq, Nigeria, North Korea, Pakistan, Sri Lanka, Sudan, Turkey, Vietnam and Yemen. None were from the United States.

Is It Happening Here?

While it is a fact that religious minorities are being persecuted in parts of the world, it would be a far stretch of the imagination to claim such persecutions in America, though some make that claim and are surprised that it isn’t obvious to everyone. I find these claims of persecution of Christians in America to be hyperbolic at best, and fictitious at worst. Segments of the Christian community often overplay the persecution card.

The Adventist faith community—the one that I am most familiar with—has its own identity linked to a persecution paradigm. We are taught to expect persecution and to be prepared to flee to the mountains at short notice. We are taught to expect to be arraigned in court to defend our faith. Our prophetic interpretations spotlight a time when the “dragon, the beast and the false prophet” will be out to get us. We see ourselves emerging from all of this as the persecuted remnant.

Why do Christians have a penchant to allege persecution? Why do we find it necessary to identify ourselves as victims of religious persecution? There are, I believe, some underlying reasons.

Christians in the United States have long enjoyed privilege, influence, and power. The narrative of privilege that has shaped the Christian worldview in America is now being threatened by the visible presence of people of other faiths and of no religious faith. To the privileged this perceived loss of power and influence can feel like oppression. People also find an illusion of safety in the familiar order and structure of life, and are fearful that these can easily fall apart. We enjoy a sense of power and control when things happen within specific parameters and according to specific rules. When these parameters appear to collapse and when the rules appear to change, we are left adrift in a sea of confusion and anxiety. We cope by portraying ourselves as victims of persecution.

There is a rising trend in the United States of what Pope Francis called “polite persecution”—the ridicule, hardship, loss of employment, and the like that Christians face when their convictions are at odds with cultural or societal trends. However, the hardship inflicted on a baker who doesn’t want to bake a wedding cake for a gay couple, or a manager refusing to grant Sabbath-observance privileges to an Adventist employee, or a teacher reprimanded in his job for giving a student a Bible, doesn’t constitute persecution as it is experienced in a global setting.

Delusional disorders blur the lines between what is real and what is imagined. Persecutory disorder is one among many types of delusional disorders. Those suffering from this disorder believe that they, someone they know, or the group or tribe to which they belong are being mistreated or spied on with the intent of being harmed. We must concede that Christians experience delusion disorders at least at the same rate as the rest of the United States population, which may account for a certain amount of the passion behind this issue.

Most Christians aren’t suffering delusions. Sometimes, though, our sense of our well-being, or lack of it, reflects the words we use to describe our struggles and problems. Words help us to communicate, but words also shape our perceptions. Mark Twain is reported to have said that “the difference between the almost right word and the right word is really a large matter—‘tis the difference between the lightning bug and the lightning.” Words like prejudice, inconvenience, discrimination, and intolerance can be strung together to convey some realities experienced by Christians in the United States.

But, to use “persecution” to describe these realities suggests something more powerful and sinister. Furthermore, it conveys an untruth. Ralph Waldo Emerson famously eschewed the “vulgar mistake of dreaming that I am persecuted whenever I am contradicted.” One can wonder what a victim of the bloody insurgencies of Boko Haram in Nigeria and al-Shabaab in East Africa, or a victim of religious violence in India or Pakistan, or a Sri Lankan worshiper on Easter Sunday, or a Christian Syrian refugee would think about the claims that American Christians make of being persecuted for their faith, when in fact they may only have been inconvenienced in some small way.

The persecution motif is firmly embedded in the Adventist self-understanding and identity: our theology and eschatology designate us as the persecuted remnant before the curtains fall on planet Earth. If we are being persecuted, it must mean that we must be doing something right. If we are being persecuted, it must be because we are taking the moral high ground. Therefore it is easy to convince ourselves that the world is a threat to our existence, and persecution is a kind of destiny. The persecution motif helps in bolstering our identity as the last and final protectors of biblical values and truth in a world gone mad with iniquity and debauchery.

The reality in America today is that far from being persecuted, Christians and other religious communities in the United States have it pretty good most of the time. It is legal to be a Christian here. It is legal to assemble for worship and witness. It is legal to convert to another religion—something that is subject to restrictions in other parts of the world, such as southern Asia, where I was born and went to school. We are not being thrown into prison. We are not getting beheaded. Religious groups are exempt from taxation, not to mention exemptions from anti-discrimination laws, exemptions from laws designed to protect employee rights, parsonage exclusions for religious clergy and other provisions in the law.

How, then, should we receive the many biblical references to persecution—not just as a possibility but seemingly as a certainty? “If they persecuted me,” Jesus declared, “they will also persecute you” (John 15:20). Are American Christians missing out on the blessedness that Jesus said would come to those who are persecuted for righteousness’ sake (Matthew 5:10)?

“Be happy about it,” says Jesus to those who are being persecuted. “Be very glad!” (Matthew 5:12). The Beatitudes, a part of the sermon in which Jesus makes these pronouncements, are declarations of God’s grace. They describe a state of well-being enjoyed by those who live by kingdom values. Those who face persecution for their faith can be emotionally sustained and strengthened by appropriating these assurances of God’s grace during their darkest experiences.

These declarations, however, are not roadmaps for righteousness. They are not identity markers of a select, privileged group of Christ followers. They are not directives designed to subliminally motivate us to invite or incite persecution, or worse yet, to feign persecution when there really is none.

Why We Shouldn’t Complain

Persecution—where it truly happens—is not always grounded in anti-religious sentiments. Sometimes individuals and whole communities are mistreated for reasons other than religion. Dr. Philip Jenkins, professor of history at Baylor University, makes the critical distinction between persecuted people in the world who happen to be Christian, and people persecuted for being Christian. A further distinction can be made between people who are persecuted—killed, imprisoned in hideous conditions, forced to convert, massacred in houses of worship, driven from home and country—and those who face some real or imaginary inconvenience, insult, or injustice, and frame it as persecution.

The issue of persecution—religious, ethnic, political or otherwise—within a global context should concern us Christians. Wherever there is such persecution, people who are harmed are our “neighbors” by Jesus’ definition—neighbors who merit our care, advocacy, intervention, and support. When people are being routinely brutalized, raped, tortured, sold into slavery, or murdered, it should evoke responses from the global Christian community.

But, when American Christians make injudicious claims of victimhood, or exaggerated or factually untrue claims of persecution, we undermine the severity of the actual persecution suffered by people elsewhere. We make the word “persecution” mean less than what it really means. Our Christian witness is compromised.  Our credibility is weakened. We appear irresponsible and foolish to our communities. We perpetuate an unwholesome fear of the “other.” Worse yet, we portray a distorted picture of God. 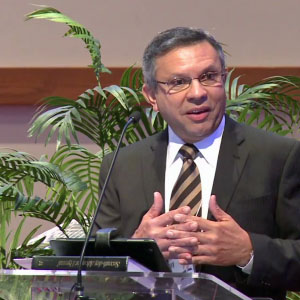 Dr. Raj Attiken is an adjunct professor of religion at Kettering College, the Adventist higher education institution in Dayton, Ohio, and former president of the denomination’s Ohio Conference.

AT Editor to Speak in Canada ADRA President: “Poverty Plants the Seeds of Religious Violence”