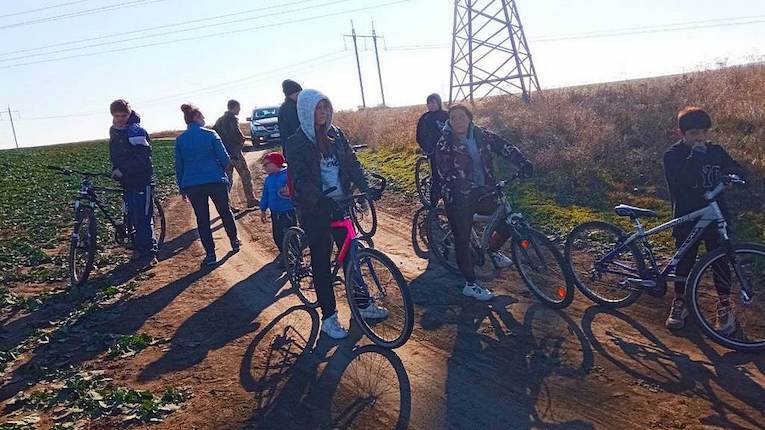 The morning of the October 31, 2021, bicycle trip for Pathfinders in Kamensky, Russia, began ordinarily enough — collecting the necessary things and arriving at the gathering place. But something different happened along the way to the pastor.

During morning preparations, in the courtyard of the Spiritual Center, Pastor Yuri Fedorov heard the muffled cries of a woman or a child for help. They were coming from the back of the area, which overlooks an abandoned and overgrown park. As he approached that part of the courtyard, the cries for help grew louder. As he quickened his pace and turned around the corner of the building, Fedorov saw a teenager running past the fence of the Spiritual Center.

The teen was holding something in his hands and heading towards the thickets of the park to escape from an elderly woman, who was following him and wailing requests to catch the thief and call the police.

Sympathizing with the woman’s grief, Fedorov jumped over the fence in pursuit of the teen and made his way through the thicket. Ten minutes later, wandering among the trees of the park, and then among the city courtyards, the thief was finally caught. He no longer had the strength to run.

Here he was: Only about five feet tall, in unkempt clothes, holding a wrapped piece of stolen sausage in his hands.

The pastor’s heart, which had been beating so hard from the exertions of the chase, froze.

“Did you steal the sausage?” asked Fedorov.

“Are you hungry? Let’s go and eat! But first, we will return the elderly woman’s property.”

The boy didn’t resist. On the way, they started talking. Fedorov suggested that they persuade the elderly woman to not involve the police, and instead, Fedorov would take him right now on the Pathfinder’s bicycle trip.

With undisguised surprise, the boy looked at the unfamiliar man.

Finally they found the woman and returned the stolen goods. It turned out to be the boy’s own grandmother. He lived with her and had asked her for money to go with his older friends to collect scrap metal.  But his grandmother had refused. He became angry, and stole the sausage.

Fedorov introduced himself to the boy’s grandmother and offered to take her grandson on the Pathfinder’s bike trip. His grandmother happily agreed. She said that her grandson did not listen to her and that she had even called the police on her grandson because of his misdeeds.

At last they came to the meeting place of the Pathfinders in the courtyard of the Adventist church. One of the church bicycles was also picked up there. The boy’s eyes sparkled. They also found clothes, because the church receives and distributes clothes.

They set off on the journey. Traveled across steppes and ravines, made new acquaintances, had adventures outside the city. They went near a toxic waste dump, passed underneath a crackling power line, overcame some hills and went down three slopes. They learned to light a fire and bake bread over it. Cooked mushrooms on skewers, had a delicious lunch and honed their skills in archery.

With the last rays of the sun, the group returned to the city a little tired, but happy.

The church thanked God for His perfect love for the imperfect human race — especially to children and young men who are just beginning to live. And recognized how important it is to have people around, ready to accept them as they are, with their mistakes and shortcomings. To befriend them and guide them along the life paths of Christ.

P.S. — I hope that adults will not read this story and forget it as just one of many. There will be, I believe, those who have “sensitive ears and hearts,” to hear in it God’s call to promote the upbringing of spiritual values ​​through club ministry to the younger generations. Contact the head of the Pathfinder Club of your conference, get help to collect children, start classes, open a club in your community. We believe you will succeed! – Yuri Fedorov, Head of the East Dnieper Conference Club Ministry

This article has been edited by AToday staff.

(Photo: Pathfinders in Kamensky, Russia, went on a bicycle trip on October 31, 2021, with an unexpected guest: a thief the pastor had caught. Photo via EAD)