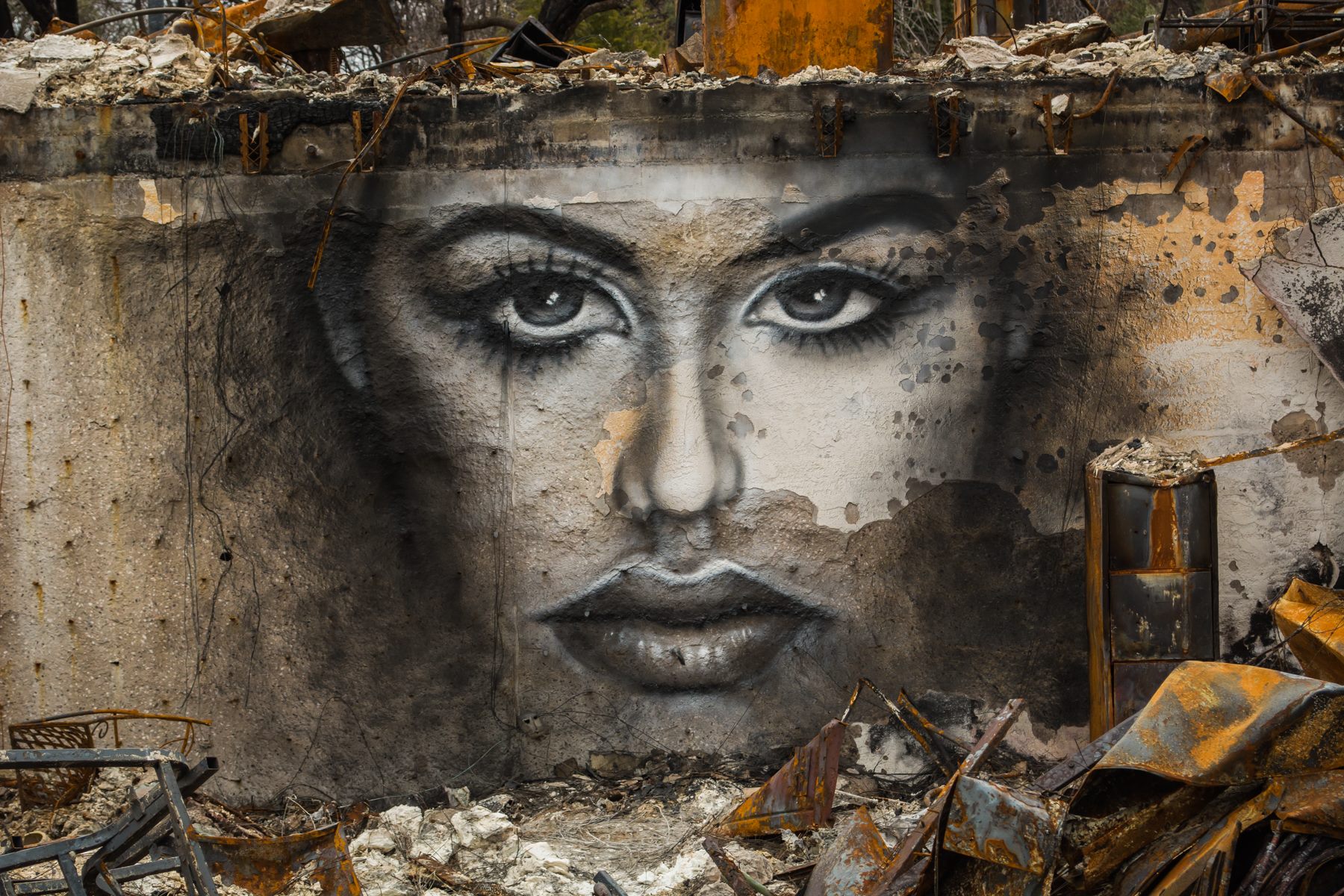 A photo essay courtesy of Lori Mallory Eckhart,[1] who has photographed some of the near 30 healing murals of artist Shane Grammer[2] created amidst the desolation of Paradise, California. 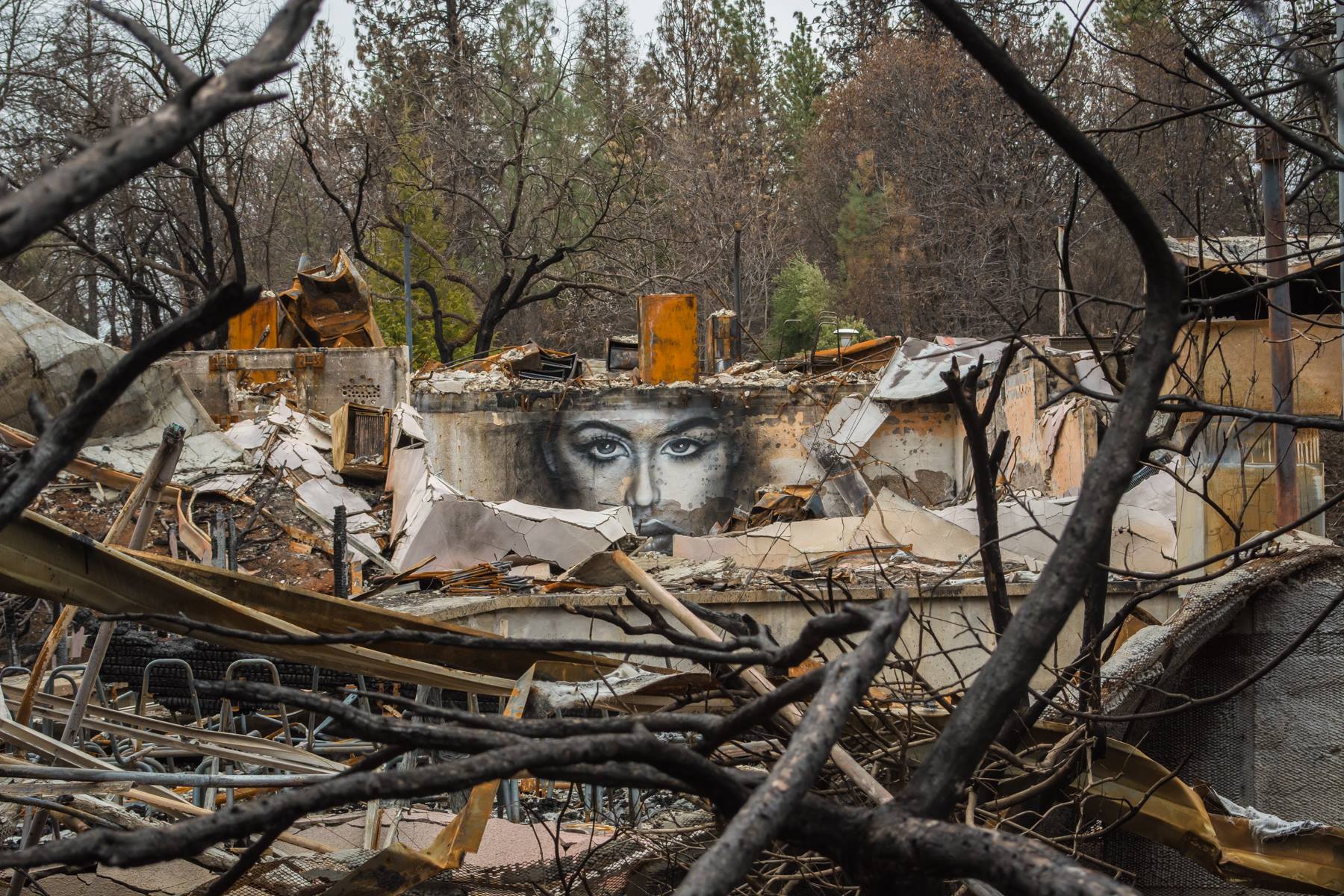 (These murals are done by Shaun Grammar.  This one
is at the site of the former Paradise Seventh-day Adventist Church.)

Jack Hoehn’s wife Deanne (nee Hoiland) was born in Paradise, California.  Paradise is the site of a November 2018 holocaust.  Deanne’s parents Dr. Dean and Dorothy Hoiland were the personally involved founders and developers of the shuttered Feather River Adventist Hospital. Deanne and Jack were married in the totally destroyed Paradise SDA church. 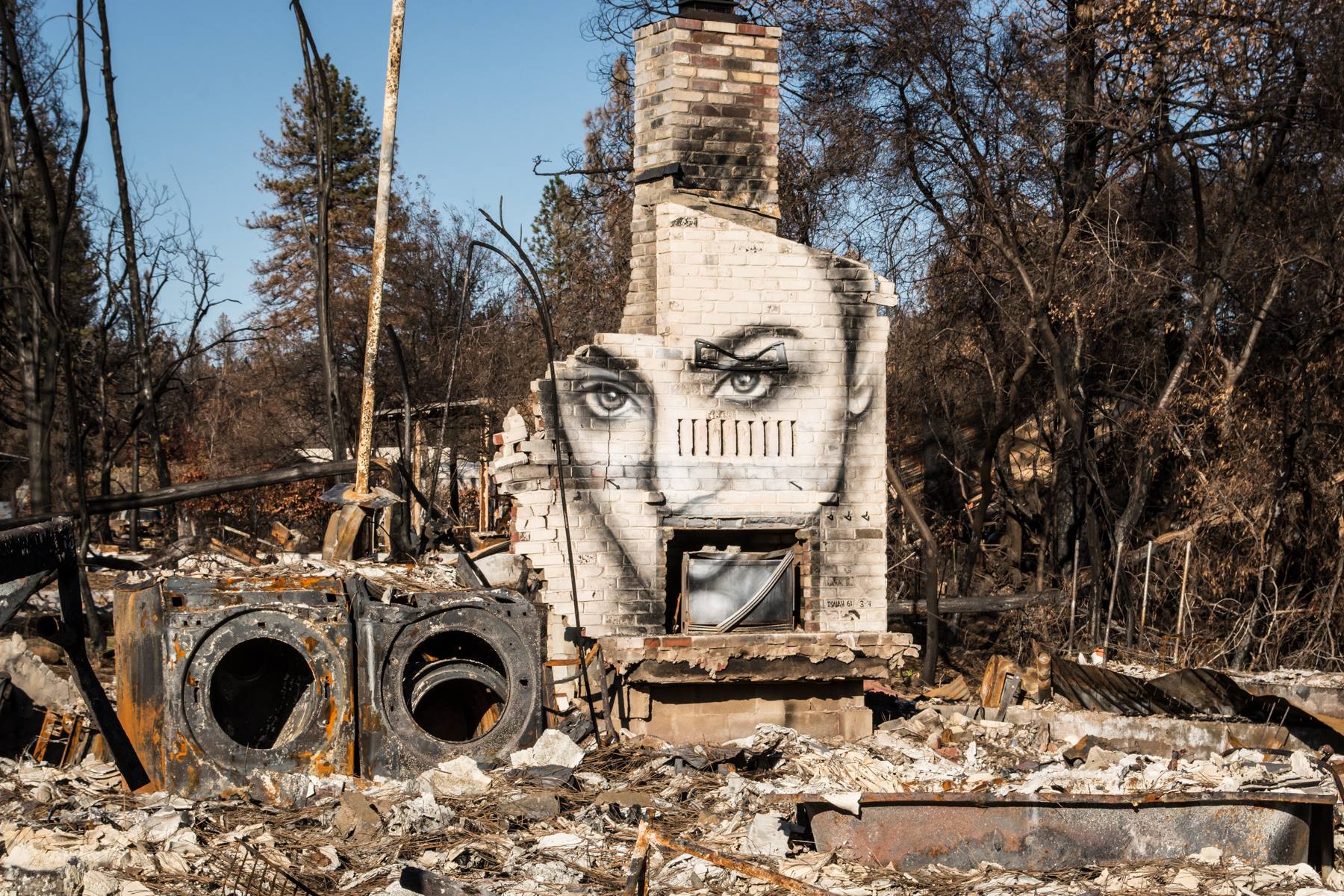 (This mural has since been torn down,
but all were known to be temporary art.)

Since the Paradise Fire (also known as the Camp Fire of November 2018 that destroyed over 13,000 homes and displaced at least 52,000 people, killing 85 or more), we have visited Paradise twice and will be going back again next week. We want to support Deanne’s sister Julie Kiraly and her husband Pete, who just this week have moved back into their spared home.  Sister-in-law Jacky Hoiland’s home along with all the homes Deanne lived in during her childhood were totally destroyed. Jacky is still in temporary housing. 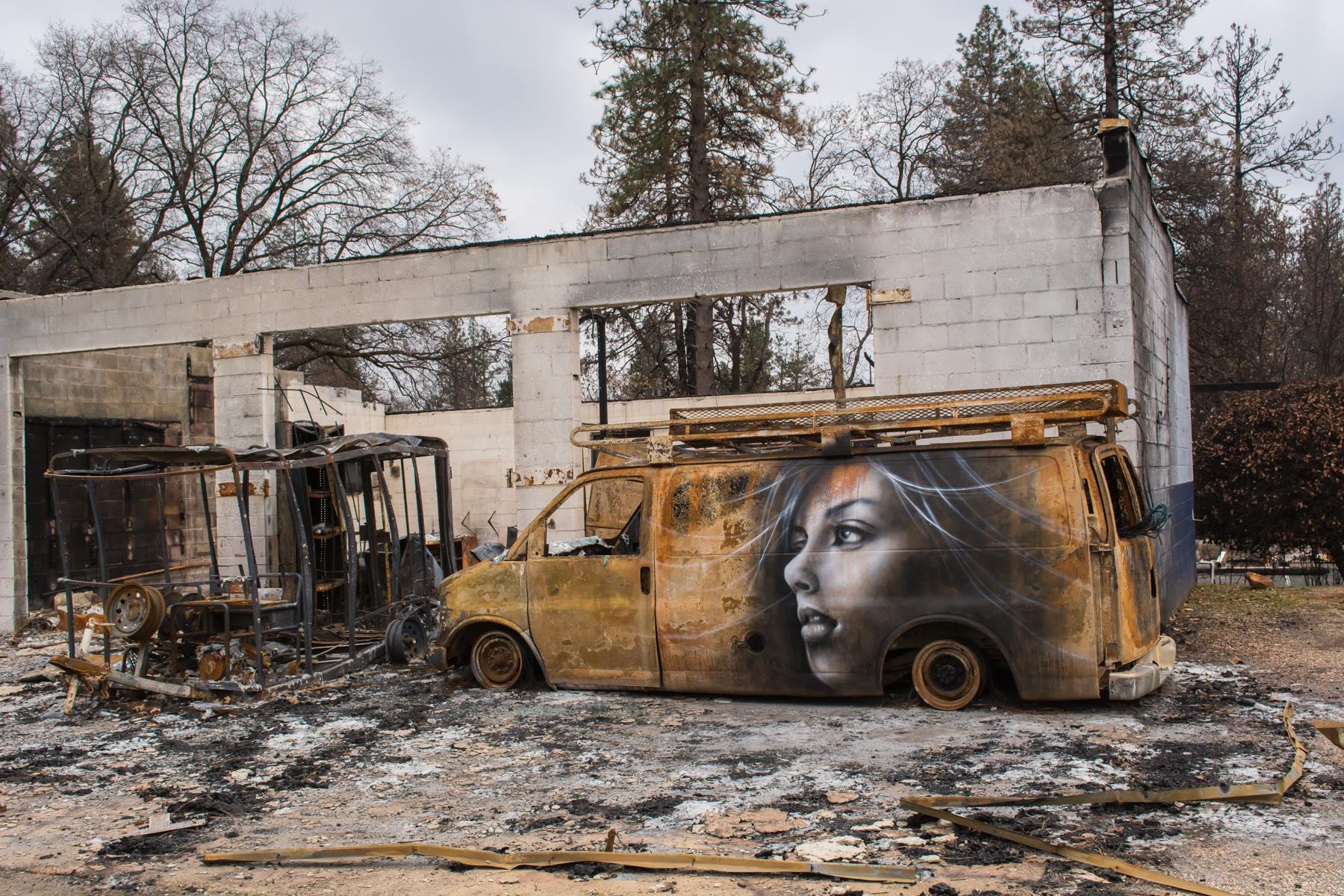 (One of the hundreds of burned out vehicles unable to be saved from the fire.)

From Paradise’s ashes we have observed several truths watching our family and their friends. The first is a general revelation. There are thousands and thousands of stories overwhelmingly demonstrating courage, kindness, and bravery. This is apparent regardless of religious, political, gender, or racial affiliation. It truly does appear that generic humanity in the ultimate hour of life-threatening stress reveal what I consider to be godly attributes.  The Paradise testimony is that humans, in spite of failings, appear to be constructed in the image of something Good. 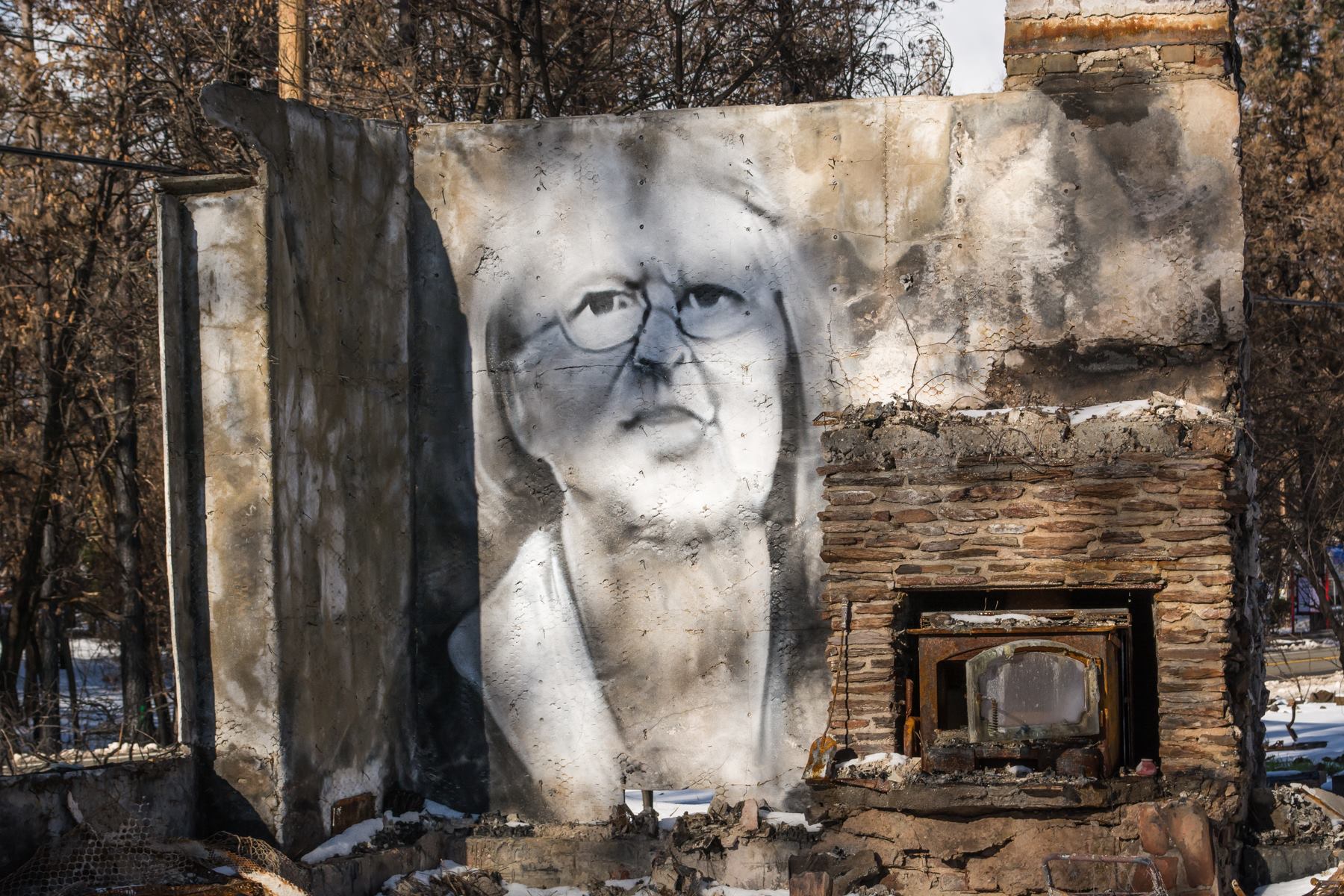 (Said to be a family friend of artist Shane Grammer.)

The second truth is more specific. This truth is that the community of faith, as least in the Adventist community and we suspect many others, has been a tremendous resource.  Adventists who lost all things, have found that unlike destroyed boards and bricks–faith, hope, and love are realities stronger than concrete. This healing resource is most readily accessible in the context of “church.” It is in church and its scheduled worships that the mutual support of displaced members for each other, the generosity of nearby Chico and Oroville churches, and the supportive response from members and SDA churches at a distance—that both practical and emotional help and healing has been found. 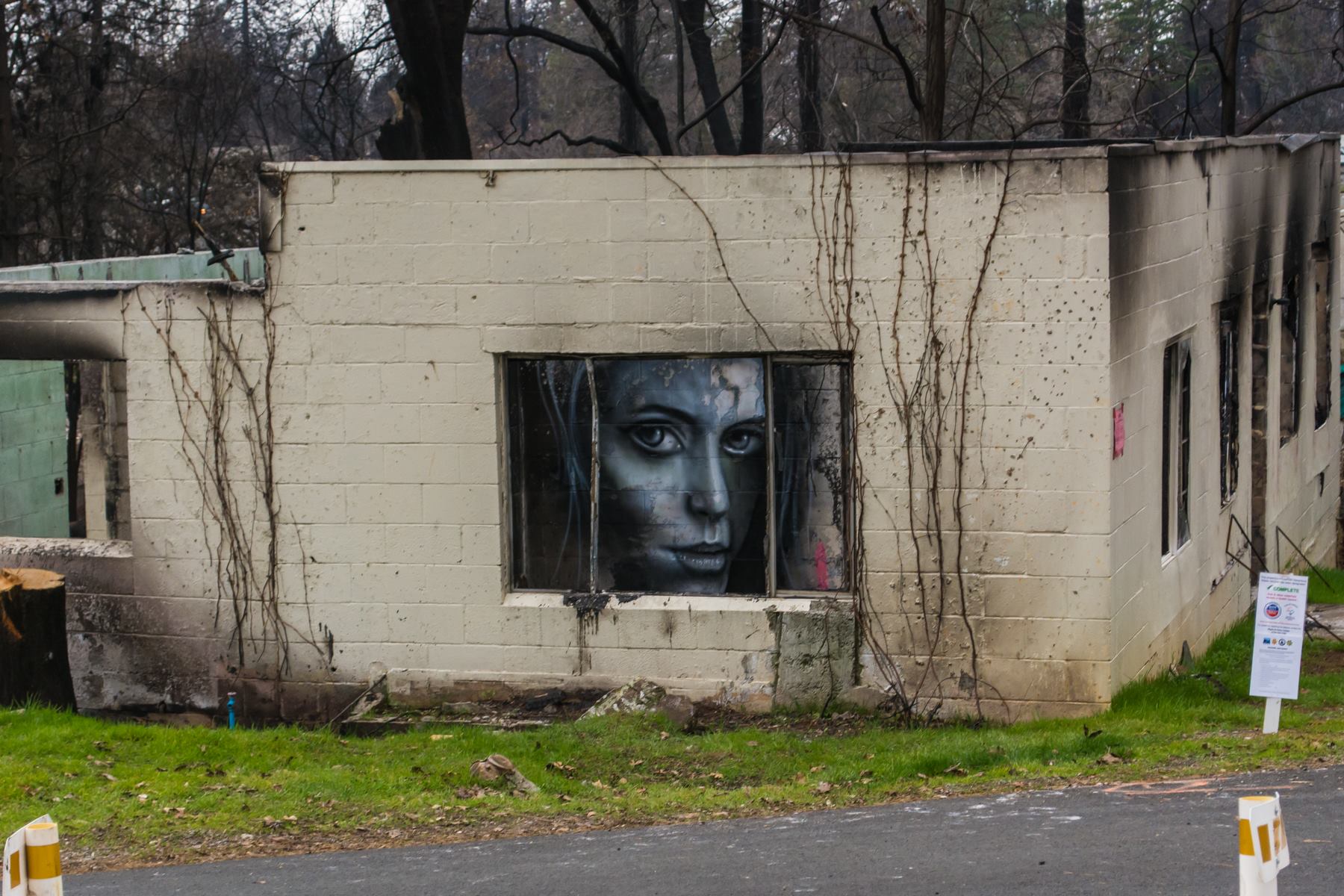 (Seen through the window of a burnt-out cement block building.)

And the third is on a person-by-person basis. There are so many beautiful individual responses to this tragedy–from the random lady in Costco who forced her last $10 from her purse onto Jacky; to the multiple personal services performed by the Paradise SDA pastor families, active or retired like Tom and Nancy  Adams, caring for others with no homes of their own; to artist Shane Grammer. 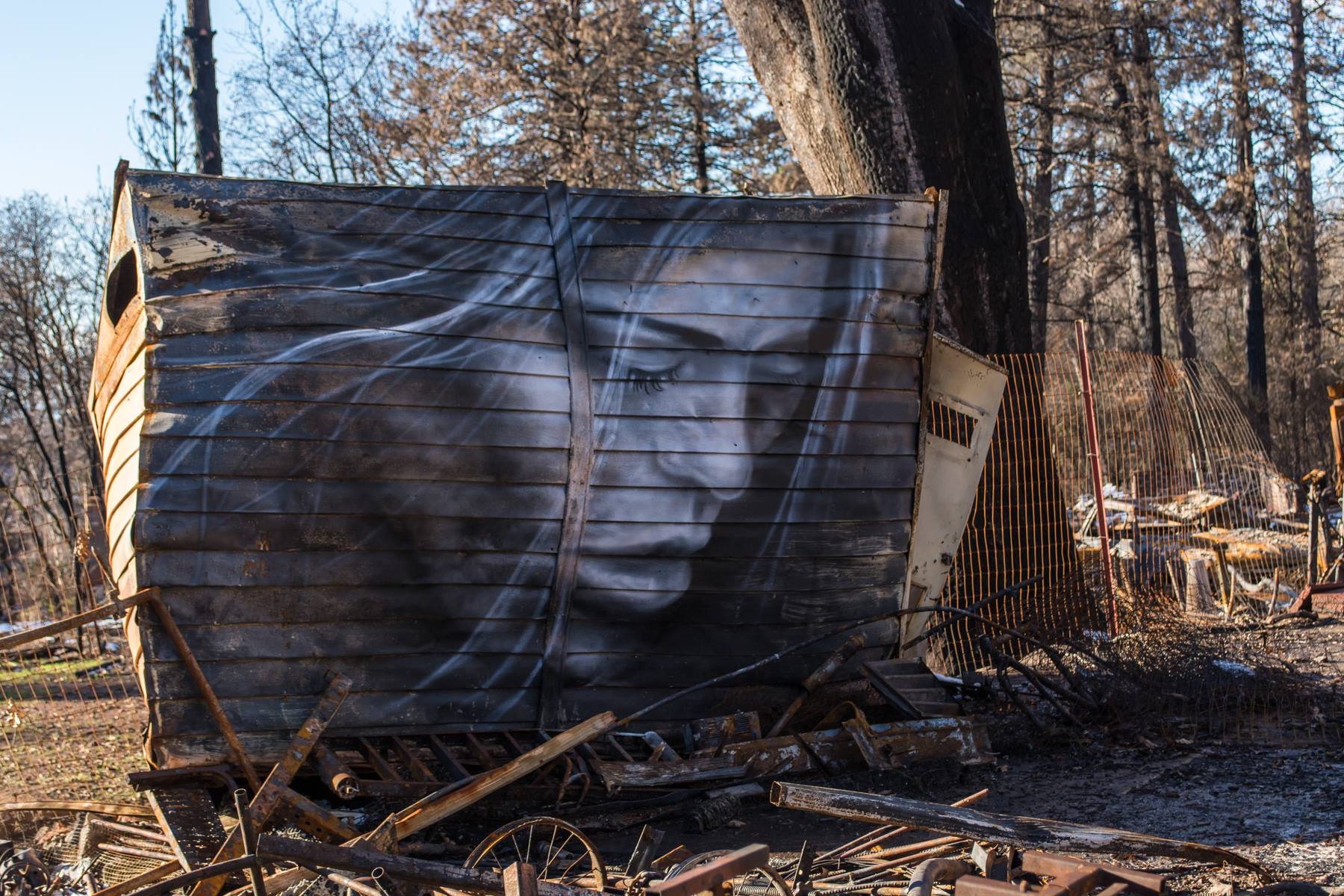 (A shed was all that was left of this home.)

Shane Grammer [2] is reported to have been born in nearby Chico and had friends in Paradise. He painted a mural at the remains of one friend’s home December 31, 2018. He is quoted as saying he wanted “to paint something that brought hope in the middle of complete destruction.” The mural of a woman on a friend’s chimney went viral on Instagram, and subsequently he has done nearly 30 more including one recently at the destroyed Paradise SDA church. All murals were done with permission of the owners. Techniques by this Disney artist now living in Los Angeles are said to use a form of spray painting. 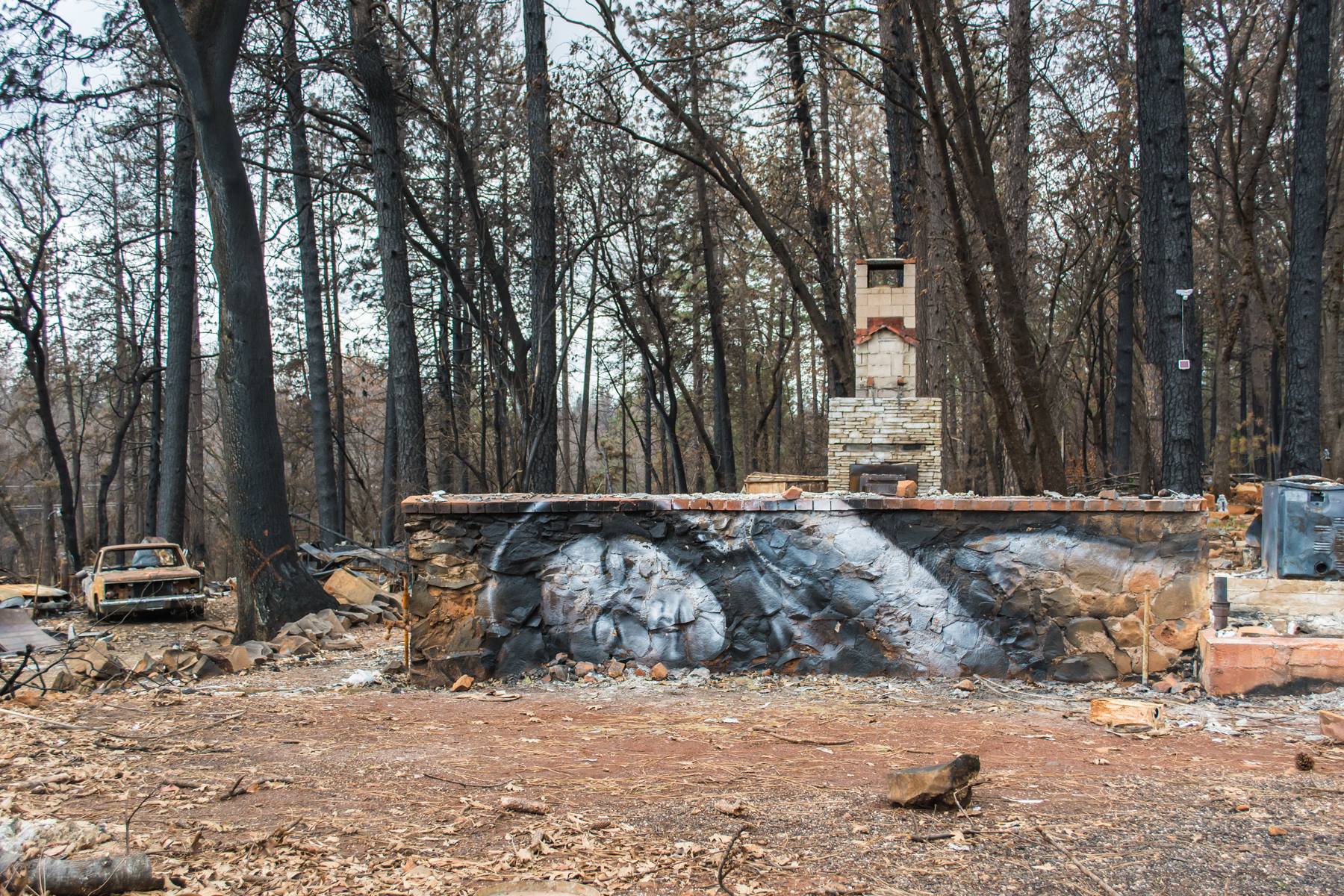 (Paradise is now sleeping.  But Adventists believe in a Resurrection)

I find the personalization of the devastation by Mr. Grammer a valuable contribution to the extensive recovery and restoration efforts that have now begun and which will continue for years to come. The grass and plants are growing back. A number of trees survived. Cleanup of debris is starting. Surviving homes are being re-inhabited. The Adventist school and hospital remain closed. The future of these institutions is unknown. But remaining Paradise SDA church members who have no church building  (now meeting in Chico Adventist Church) report being closer to each other than ever before.[3]

[If you are able to continue helping survivors you may do so through the Northern California Conference of SDA’s at https://nccsda.com/ ] 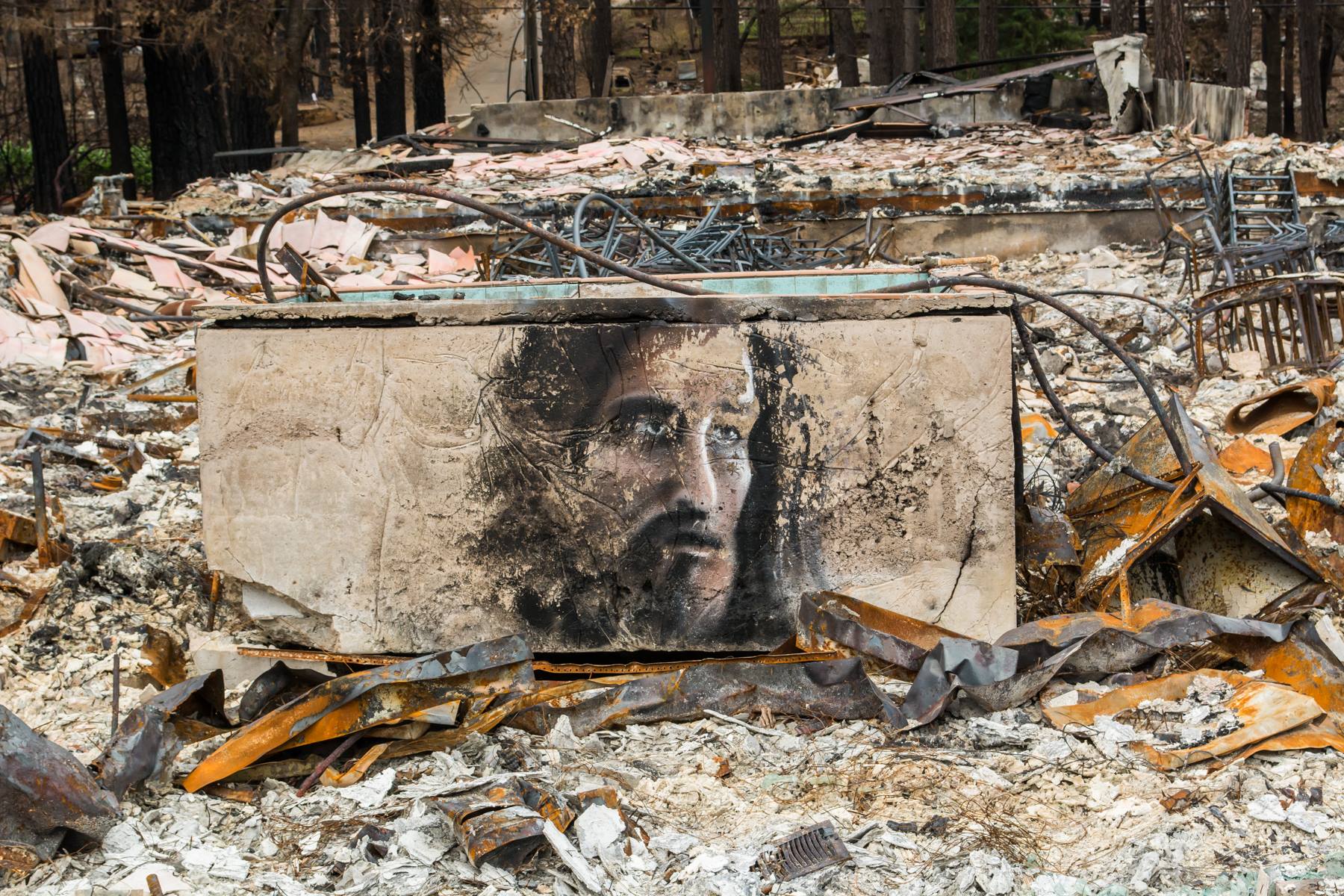 (Jesus on the remains of the baptistry of the Hope Christian church.)

[1] All these photographs are taken by and used with permission of Lori Mallory Eckhart, a family friend who lives in Chico, California. These and more can be seen on her Facebook page.  https://www.facebook.com/lori.eckhart

[2] The information  on Mr. Grammer comes from https://mymodernmet.com/shane-grammer-mural-artist/?fbclid=IwAR0Hk9Q0ailJ_ssahMuN0JPc_7_M2Jr2iQF0IkG0haRRi70fA1eh4jFlaxA

[3] Jack and Deanne recorded a video interview shown February 28 for their home church giving a report on the Paradise SDA Church response to the fire here:  https://youtu.be/xcLlPXC423E