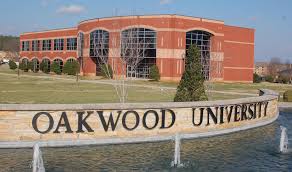 September 1, 2016:    Using data from the two most widely used standard entrance exams for colleges in the United States, the Niche organization compared 8,000 institutions at the 25th and 75th percentile of the students enrolled during the most recent year of testing. Oakwood University, operated by the Adventist denomination’s North American Division, ranked 8th in the state of Alabama where it is located in the city of Huntsville. It is one of the historically black colleges and universities in the United States, focusing on the needs of African American young adults.

Niche ranked the schools using the average scores from the Scholastic Aptitude Test (SAT) and the American College Testing (ACT) panel of tests. The SAT is conducted under the auspices of the College Board, a national organization serving higher education, and administered by the Educational Testing Service. It was for many years the dominate tool for diagnosing the readiness of high school seniors to go to college. In 2011, for the first time, a larger number of high school seniors in the U.S. took the ACT.

Four Adventist institutions were not ranked because the Niche report stated that they could not obtain the data necessary to include them in the analysis. These included Kettering College in Dayton, Ohio; Loma Linda University in San Bernardino, California; Southwestern Adventist University in Keene, Texas; and Walla Walla University in College Place, Washington.

La Sierra University ranked 45th in California despite the fact that its average scores ranked higher than three other Adventist institutions included in the study. Of all the states in the U.S. where Adventist colleges and universities are located, California has the largest overall number which contributed to this ranking.

In general, Adventist colleges and universities did very well in this analysis, a source who works in higher education told Adventist Today. “Adventists value education and have higher percentages of parents with college degrees,” the source pointed out. “The Valuegenesis studies and related research conducted by the school of education at La Sierra University has shown that Adventist elementary and secondary schools turn out students with higher levels of achievement than the public schools and most other religious schools in America.” Those data help explain the outcome of the Niche data.

Niche is an information business started at Carnegie Mellon University in 2002. It provides data to help people “make big life decisions,” profiling neighborhoods in terms of quality of life to help with decisions about home purchases and schools to help families choose where to enroll their children and young adults. Niche has no religious or political affiliations.