NY Conf Prez: ‘I Personally Do Not Believe That More Laws Will Curb Gun Violence’ 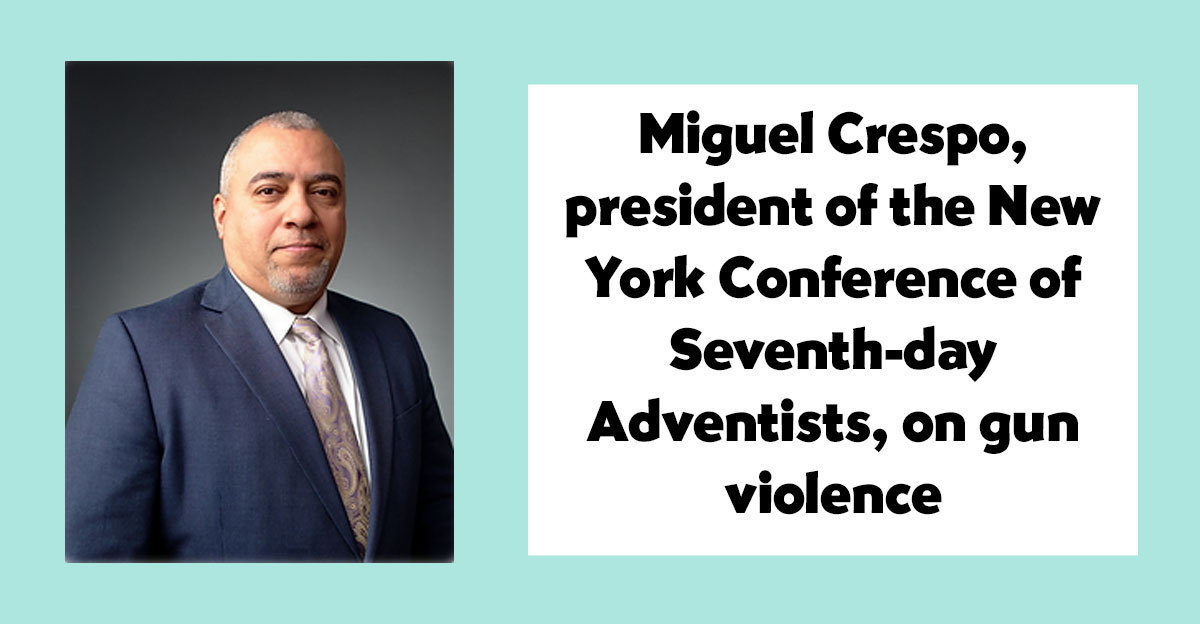 31 May 2022 | On May 18, 2022, North American Division, Atlantic Union Conference, Northeastern Conference, and New York Conference leaders issued a statement about the racially motivated May 14, 2022, shooting in Buffalo, New York, U.S., where an 18-year-old gunman killed 10 when he opened fire in a supermarket.

Miguel Crespo, president of the New York Conference of Seventh-day Adventists, responded to questions Adventist Today sent to those leaders. The following are his responses (AT’s questions are in bold and underlined).

The following, to be clear, are my own thoughts and reflections. I don’t want to speak for the conference I serve, or the Division on this.

I serve as the President of the New York (NY) Conference with our office in Syracuse, NY.

One of the hats I wear is Safety Director for the conference. In addition to property management this also includes the safety of our members as well.

I am a former U.S. Marine and keep certified through the ALICE Training Institute (now “Navigate 360”) as an Active Shooter Trainer. I also take regular training classes in firearm use and scenario-based decision making during critical incidents. I own firearms and enjoy target shooting (when I find the time…).

I’ve presented on the subject of Active shooter response and best practices to churches, pastors and community members in our conference and also other parts of our Union (Atlantic Union).

What do you think about gun-control laws?

When it comes to dealing with the plague of gun violence, the church has said very little about it, as a specific issue. I’ve found that there is no consensus on gun control laws because we are so diverse. The SDAs who come from the cities tend to have a different perspective on the root causes and solutions than those SDA members who live in the suburban/rural areas.

Generally, our society tends to be fractured along political lines and I believe that has affected the issue within the church as it relates to the gun violence issue.

Would you, as a church leader, support gun control?

If there is a law or control set on guns that would curb violence I would support it. The question that we need to look at is, “What do we need to do to save lives, as it relates to ‘would-be’ victims of gun violence?” I personally do not believe that more laws will curb gun violence.

In New York there are very restrictive rules on purchase and ownership of firearms. You cannot even touch a pistol in a gun store unless you have a pistol permit. They won’t even let you touch it! And the permitting process is not a simple one: character references, background checks, review by a local judge….

And yet, in Syracuse there are news reports of shootings almost on a daily basis. New York City is even more restrictive. You cannot even have a BB pistol in that jurisdiction. And yet the crime rate, shootings specifically, continue.

What those who want gun control, alone, fail to understand is that the only ones that new gun restrictions will affect is me, and people like me: responsible, law-abiding gun owners.

Criminals and the mentally ill are not deterred and will not suddenly stop carrying or using firearms because of new laws.

A solution to the gun violence issue has to be pro-active (legislation that makes sense) and reactive (response to evil when it rears its head).

I don’t understand how someone can think that laws will change the behavior of the lawless and think that it will result in keeping people safe.

An outright ban on all firearms would not even work because of the underground market. Drugs, guns run in the same cesspool. The evil and sick will still get what they want, or find other ways to hurt people. In the past, the racist, insane and criminal have used homemade bombs, cars, machetes, even planes to inflict damage.

If we know that certain races or groups of people are targets of the criminally racist, why aren’t we encouraging them to protect themselves as part of the solution to deal with gun violence? Let the government, if our lives do matter to them, provide training and support and permit teaching people to protect themselves and their loved ones. There is, of course, a concern that more guns in the mix may make things worse. And that is one of the subjects that Adventists would have a very animated discussion on based on where we come from and our personal experiences.

I believe that people of color have been, as a subset, victims of gun violence (though not the only group), and politicians are passing laws and solving nothing. In the book of Esther, when God’s people were about to be destroyed, the king issued a decree giving them the right to defend themselves. Self-defense should be part of the solution to respond to gun violence. That is my personal opinion.

If you define gun control as a “response to stem the tide of death as a result of illegal gun use, which includes pro-active and reactive measures,” I would support it.

Why hasn’t the Church or North American Division (NAD) advocated for gun control yet?

This is just one of the many issues that we see plaguing our country. I believe we have a lot of stuff on our plate. I think that there would be some disagreement on the actual solution and what “gun control” means in the minds of our constituents.

This is an important issue, please don’t misunderstand, but I would caution us to be careful on making statements or taking positions on issues outside of the 28 fundamentals of the church. The fear I have is that if the solutions that are voted are largely the recommendations that come from one political party or another, we will cause another point for the church to be divided and argue about.

The question has come up, related to other subjects we have discussed as a committee (NAD ExCom), regarding the issue of unity vs. uniformity. Do we have to believe everything exactly the same way on issues outside of the 28 fundamentals? I think that this would be a good discussion to have before delving into this issue.

What are the Church and the NAD doing to actively combat gun violence and racism?

Gun violence and racism are symptoms of a greater problem: hearts that are devoid of love and under the control of the enemy of souls. Hate, murder, violence, are all rooted in hearts devoid of Christ. The NAD is doing A LOT to deal with this. This is, in fact, the reason for our existence. To introduce the life-changing, sin-defeating Savior, Jesus Christ. Are we doing everything we can do? I think that is a great question!

These are just my personal thoughts. I think that a comprehensive gun control response should be pro-active and reactive. Racism, mental illness, and a heart devoid of Christ are a deadly combination. Laws that restrict use and access of firearms are just one area. I would love to see a movement on the subject of prohibiting the mentally ill from having access to the video games that promote mass killings and gore. Video games promote a culture of death. We have not even touched on that but I think it is a part of the problem also.