By Susan Onuma, posted Sept. 22, 2016 by D Kovacs     This story struck me immediately. It has kids! It has kids who are sick and a kid who wants to help! What’s not to like? However, it’s not what it first appears. You might assume that April Wall, who is hoping to raise $5,000 for research into children’s cancer, is a cancer patient herself. You would be wrong.

This feature is different from what is generally published here, so I want to make sure there are no misunderstandings. This story, which I have posted verbatim with permission, was written as a fund-raising request from Loma Linda Children’s Health. I believe we can all agree that it is a good cause, and if you wish to contribute, that’s wonderful, but Adventist Today is not here to raise funds, and that is not why I chose to feature it. I wanted to showcase a humanitarian who is only nine years old (and those haven’t been particularly easy years) who has something she could teach us all about being a light to the world around us.

Proceeds of the event go to children’s cancer research

Loma Linda, CA, September 22, 2016 – After reading a book about children fighting cancer, April—a 9-year-old fourth-grader from Ridgeview Elementary in Yucaipa who is fighting her own battle with cerebral palsy—decided she wanted to make a difference. Since her father had shaved his head during the annual St. Baldrick’s Foundation’s “Brave the Shave” event last year, she thought that sounded like a good way to go. 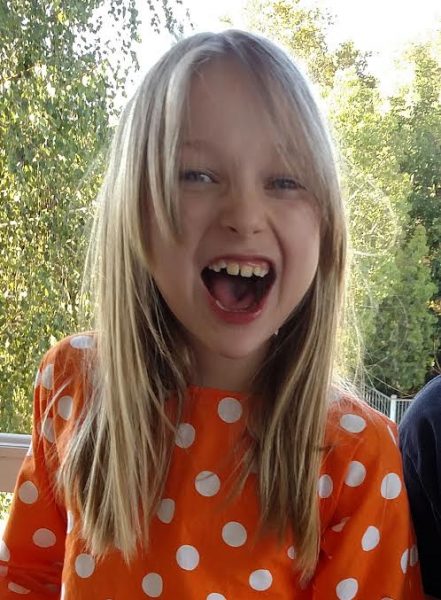 At a recent school assembly, April announced to her classmates and teachers that she intended to shave her own blond locks during a September 29 St. Baldrick’s ‘Brave the Shave’ event, which will be held from4:30 to 7:30 p.m. on the north lawn of the Centennial Complex at Loma Linda University Health.

According to April’s dad, Nathan Wall, PhD, April was born prematurely at only 27 weeks of life. “Each day forward,” he notes, “she has walked the earth with cerebral palsy. She has wished her whole life to be like everyone else and not look different with her leg braces or how she walks.

“However,” he continues, “she is willing to brave being bald and really standing out to support so many children she doesn’t even know.”

April has already raised more than $3,000 from a total of 23 of her friends and relatives, but she can’t do it all alone. She would like you to commit to shaving your own head at the September 29 event, and solicit money from friends, family members, and colleagues in honor of your beshorning.

April hopes to raise a grand total of $5,000 herself. She has a few thoughts on why people should get involved.

“They should give money to St. Baldrick’s because they are helping us raise awareness and find a cure for cancer,” April exclaims. “I told all the kids in my class about this, and two kids from my class want to do it and one of their grandparents is going to do it, too. I gave the class bracelets that said, ‘Conquer Childhood Cancer.’”

Jacqueline Coats, senior research assistant at Loma Linda University School of Medicine, reports that St. Baldrick’s is the second-biggest funder of childhood cancer research in the world after the National Institutes of Health.

“Being a researcher,” Coats observes, “that really impresses me. They’ve only been around since 1999 when founder Tim Kenny challenged colleagues John Bender and Enda McDonnell to shave their heads and get their friends to contribute to childhood cancer research. Since then, St. Baldrick’s has raised more than $200 million for pediatric cancer research. Of that amount, over 70 percent goes into actual cancer research. That’s really phenomenal!”

Coats adds that Loma Linda University Health, which has already raised $7,777.00 for the event, currently stands in first place among American colleges and universities hosting a Brave the Shave event during the 2016 academic year.

Individuals interested in shaving their heads or contributing money to help members of the “April Makes a Difference Team” take aim at cancer are invited to call Coats at (413) 24-SHAVE. They can also go online at https://www.stbaldricks.org/ and type Loma Linda into the search bar.