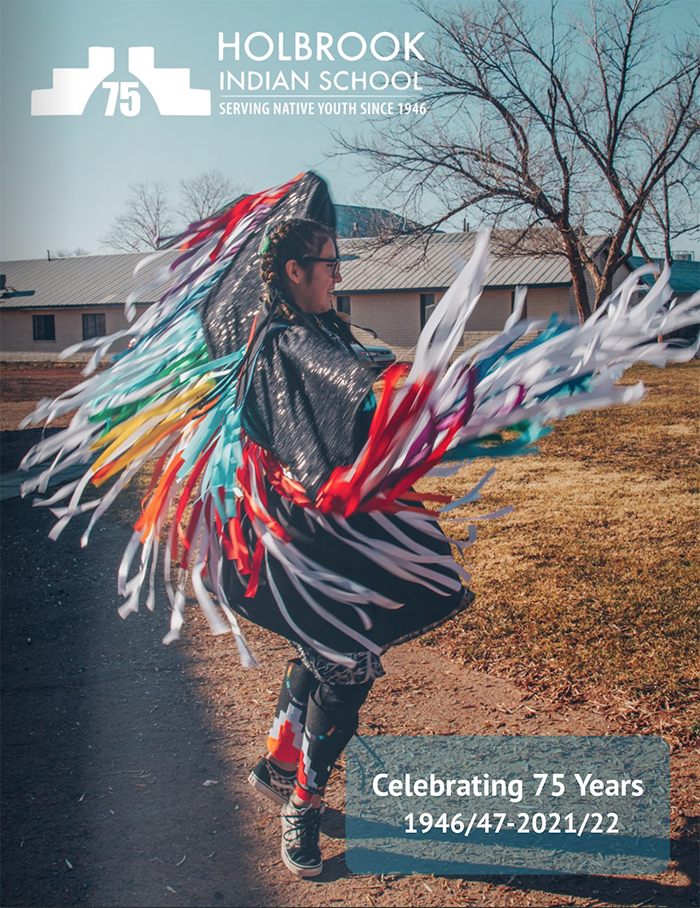 On March 6, 2022, Holbrook Indian School (HIS) celebrated 75 years of operation. The program can be viewed on the school website. The school also screened a video titled HIS Then and Now, which is available to watch online.

The school emphasizes Native culture, including Native-taught classes in Navajo language and government, and coursework in indigenous art and sustainable farming practices. “We want them to not feel ashamed of their Native heritage,” Sam Hubbard, a faculty member, said.

According to several school publications, the story of HIS begins in 1941, when Marvin Walter, a missionary working for the Arizona Conference, set out to learn how he could help the Navajo community. Walter spoke with the people and learned that they wanted their children to receive an education, so the Walters moved to Holbrook, Arizona, U.S., in 1945 and built the mission school that would become HIS. The first class began in 1946, with 30 students.


“Throughout the past 75 years, students from many Nations have come to Holbrook,” the school stated. “Students from HIS have become nurses, teachers, pastors, accountants, dentists, welders, private business owners, and have served in the U.S. military.” A former student named Charlotte Beyal became the first Navajo and first female, judge magistrate in Flagstaff, Arizona.

At the anniversary celebration, Jovannah Poor Bear-Adams, an HIS graduate who later became school vice principal, thanked HIS for helping her escape from a cycle of poverty and abuse, to change her life, and that of her children.

“My children have not known hunger, they have not seen abuse, they have not been afraid to go to sleep at night the way that I have,” Poor Bear-Adams said during the anniversary program. “And the biggest thing, again, is my children are growing up learning a true picture of what Jesus Christ looks like.”

Developed by the global Adventist Church’s communications department in partnership with Hope Channel, the popular Heroes: The Bible Trivia Game will celebrate its one-year anniversary on March 25, 2022.

In a continued effort to improve the app’s features and reach, Hope Channel plans to make the game available in Hindi, Chinese, and Tagalog by its one-year anniversary. They are also scheduled to release a new Bible study series about the three angels’ messages. An existing “The Big Questions” Bible studies is accessible online or through the app.

According to Heroes project manager Jefferson Nascimento, more than 2,300 students are currently taking The Big Questions Bible studies (1,190 English, 576 Portuguese, 435 Spanish, 104 French, 19 Romanian), not including the studies being taken through Novo Tempo—Hope Channel in Brazil—bringing the total number to almost 3,000.

Despite its enthusiastic uptake, Nascimento acknowledges that it is difficult to track the progress of individuals and how many people are baptized as a result of these studies. “To change this, we are creating an offline version of the Bible studies, so it can be used as a guide in local churches, Pathfinder clubs, small groups, and schools,” he said.

The Blue Zones are five regions of the world with the highest concentrations of people who live to be 100 years old: Sardinia, Italy; Okinawa, Japan; Loma Linda, California, Ikaria, Greece; and Nicoya, Costa Rica.

Dan Buettner dedicated his work to researching the people in these communities and discovered many commonalities among them, including their dietary patterns. These regions are largely plant-based (for diet), eat plenty of whole grains, consume beans and legumes regularly, and even enjoy red wine on a regular basis.

He also discovered similarities in the kinds of food they avoid, reported website Eat This, Not That.

1.) Fast food. More specifically, the longest-living people don’t eat very many hamburgers. According to an Adventist Health study cited by Blue Zone researchers, vegans and pesco-vegetarians were among the people in the world who lived the longest.

2.) Processed baked goods and sweets. The people in the Blue Zone communities significantly limit their consumption of processed goods, especially those with tons of added sugar. While they consume plenty of natural sugar from fruits, oats, grains, and red wine, these communities eat much less added sugar than in America.

3.) Bacon and sausage. The longest living people in the world don’t consume much meat at all, especially red meat. Along these same lines, these communities also steer clear of processed meats such as deli meat, bacon, and sausage.

4.) Soda. Blue Zone researchers found that consuming added sugar in the form of a drink such as soda was specifically harmful because of the empty nutritional value.

The pandemic has unearthed mental health needs that have been simmering for many years. Mental health professionals and lay members have their roles in meeting this need. North American Division (NAD) Health Ministries is presenting RESTORED — a virtual mental health and wellness summit, March 31–April 3.

This is an online, virtual event. All sessions will be held via Zoom or similar technology. There will be more than 20 hours of programming.  Sessions include keynote presentations from the main stage, panel discussions, and interactive workshops, as well as practical trainings geared for the general public and faith-based ministry leaders.

General and breakout sessions are available to registered attendees via a live interactive experience and on-demand. Participants also will be able to connect through live chat conversations.

Fayth Miles, PhD, lead author of the paper and assistant professor at Loma Linda University School of Public Health and School of Medicine, says certain metabolites found in significantly lower abundance in vegans likely place them at lower risk of cardiometabolic diseases. Vegans showed lower concentrations of metabolites that appear to be associated with cardiovascular disease, diabetes, and inflammation, which were consistently higher in non-vegetarians. This suggests that high consumption of plant-based foods may lower the risk of metabolic diseases.

Evidence from Adventist Health Study-2 indicates more favorable outcomes for vegans and other vegetarians, including better cardiometabolic profiles, and reduced risk of diabetes, cancer, and cardiovascular and overall mortality. This study provides evidence for causal links between dietary patterns and disease by showing robust differences between vegans and non-vegetarians on the molecular level.

Vegans in AHS-2 consume the highest amounts of plant foods and were compared with non-vegetarians to maximize the contrast in metabolic profiles. For the purposes of this study, vegans were defined as those who never or rarely (less than once per month) ate meat, eggs, and dairy, and non-vegetarians were defined as those who ate at least 28 grams of red meat per day, although the majority consumed at least 56 grams.

(Photo: Holbrook Indian School in Arizona, U.S., recently celebrated its 75th anniversary. The school has been credited with helping its students escape the cycle of poverty and abuse. Photo via North American Division news site.)