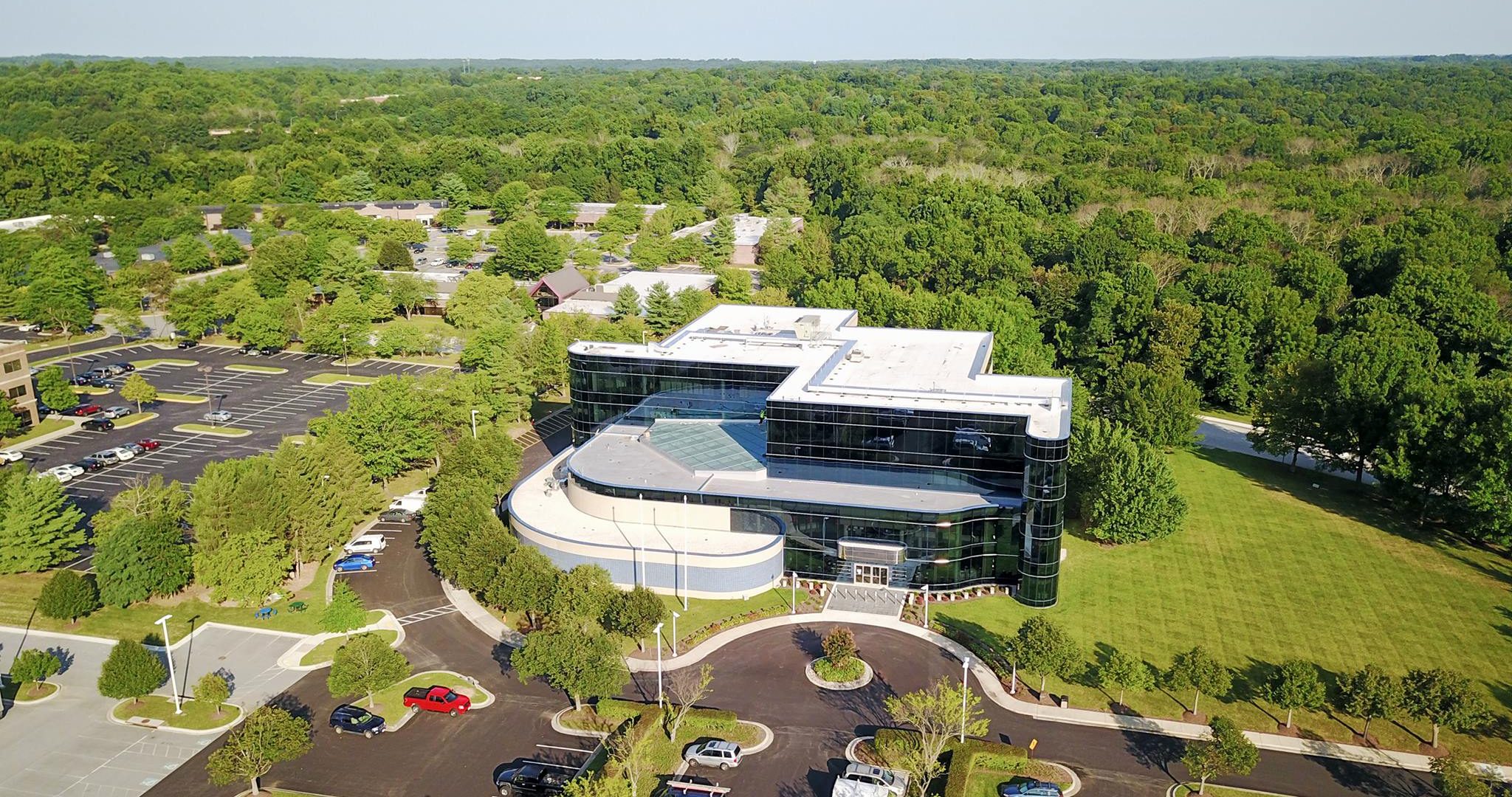 October 26, 2017:       The Adventist denomination’s North American Division (NAD) officially opened its new office in Columbia, Maryland, this morning. Several hundred people gathered in the parking lot to observe the ribbon-cutting ceremony. John Wilkinson, the Secretary of State for the State of Maryland presented a state flag and the Pathfinder Drum Crops from the Allegheny East Conference raised the flags outside the building before everyone went inside for the rest of the proceedings.

Evans was proud to announce, “It is all paid for.” No debt was incurred for two reasons. Number one, it is a recycled building that was originally constructed for the Nielsen company that does ratings for American television. Number two, the NAD has been putting aside depreciation funds (as required of all denominational units by the General Conference [GC] Working Policy) since the late 1980s when it became an actual organization and those funds have built up to more than enough to purchase the new facility and remodel it to meet the needs of a denominational headquarters.

Ever since the plans for this facility were announced last year, some church members have been grumping about the new office and whether there is really a need for so much denominational bureaucracy. In fact the GC complex in Silver Spring (Maryland) was built in 1989 to house about 650 employees which had grown to more than 900 this year, so when the 160 NAD staff moved out to their new office in recent weeks it did little to alleviate the crowding.

The 160 NAD staff serve the needs of nine union conferences, 58 local conferences and one mission field, a dozen universities and colleges, more than six thousand congregations and 1.3 million church members, as well as hundreds of hospitals, schools, community service agencies and media operations that stretch from Bermuda in the Atlantic Ocean to Hawaii and Micronesia in the Pacific Ocean across seven time zones. Opinions will always vary as to what is “too much” and what is “too thin” when it comes to organizations.

The NAD has a complex missional context: Canada and the United States of America are two of the largest nations on the globe, each with continental distance and highly developed economies, science and technology. They are both among the most diverse of societies with a huge melting pot of religions, lifestyles, subcultures, political ideologies and immigrant communities. The Adventist faith is actually more marginalized in the NAD than it is in many of the nations in the southern hemisphere.

This new building is located 12 miles north of the GC office complex which is six miles north of the building in Takoma Park that the GC moved into in 1907, more than a century ago, and then vacated in 1989. All of these locations are along Route 29, a state highway that runs from Washington DC (the American capital) to Baltimore, one of the largest sea ports on the east coast.

Bradford was present to be honored with the major meeting facility in the building being named the Bradford Conference Center. A permanent plaque near the entrance states, “Dr. Charles E. Bradford was the first President of the North American Division. Affectionately known as ‘Brad,’ he influenced the course of Seventh-day Adventist history. His life and service are profound reminders that we too ‘can make our lives sublime.’”

On January 11, 1979, when Bradford was elected GC vice president for North America, there was in reality no such organization as the NAD. It was a legal fiction used occasionally in denominational organization such as the nominating committee caucus at the GC Sessions every four or five years. The GC staff and departments operated directly with the union conferences and institutions in North America unlike its activities in the rest of the world. Bradford began to develop an actual NAD organization and it was not until the 1985 GC Session that the “special relationship” was written out of the GC constitution and bylaws, and he was voted the title division president.

Bradford was the first NAD president and the first African American to serve as a division president. He is still a powerful preacher, as he demonstrated for just a moment or two during the ceremonies this morning. He has been one of the most progressive leaders in the denomination’s history.

The new facility sits on 11 acres of grounds and parking lots, and includes not only the Bradford Conference Center and the offices for the staff of the various departments, agencies and several affiliated organizations, but also the C. D. Brooks Chapel and space for community outreach activities in the local area. It has been entirely remodeled to meet the needs of the Adventist operations.

Wintley Phipps sang “Amazing Grace” and there was music from a number of groups from Takoma Academy, Washington Adventist University and local churches throughout the region. Pastor Dave Weigley, the union conference president whose office is just a mile or two from the new facility brought a welcome. Pastor Ted Wilson, president of the GC, prayed one of more than a dozen prayers asking for God to use this structure and the people it houses to further His mission in North America. Weigley mentioned in passing that his union conference has an inclusive approach to the Adventist mission and does not discriminate against anyone called by God to ministry, a point that has been a bone of contention with Wilson, even last week at the GC annual meeting.

“When I was called to the NAD staff in January, 1987, they were using a few discarded rooms in the old Review & Herald publishing house in Takoma Park,” Pastor Monte Sahlin, CEO of Adventist Today, recalls. “Some of the department heads had their desks out in the hallway and there were cavernous empty spaces two and three stories high where the big printing presses had been and warehouses for paper supplies and book inventory. There were many bureaucratic conflicts as the GC staff had to get used to going through a division in the ‘homeland’ where they were used to go directly to the conferences, institutions and even local churches.”

“This new office represents the full maturing of the denomination in North America where it began,” observed Sahlin. “Yet in some ways it really isn’t yet ready for the realities of faith in the 21st century.”

The NAD executive committee gets down to work on Thursday afternoon for its annual meeting that continues into the middle of next week. Policy changes, major program plans and other topics will be on the agenda, including filling any vacancies among the senior staff and leadership of key institutions and agencies. Adventist Today executive editor Dr. Loren Seibold will be present and cover the meeting for our readers.

A video of this morning’s events can be seen here.

The feature photo shows the new North American Division office from the air, including the parking lots and grounds of the multi-story building.