(Fourth in a series of five articles on how we can know the age of the earth and when life was created. Part three, on DNA, can be found here.)

Quartz crystals formed into the shape of tiny tuning forks can be made to vibrate at a fixed frequency of 32,768 cycles per second. When I was 23 years old, Seiko made the first quartz crystal wrist watch that has all of us timing our days within an accuracy of ½ second per day.

Now the National Institute of Standards and Technology in Boulder, Colorado, has a caesium-133 clock based on the radioactive decay of that radioactive element’s moving two electron spin levels, making 9,191,631,770 cycles per second. This gives an accuracy of within one second every 30,000,000,000 years!

The same invariable and fixed radioactive decay of other elements can also give us a chronological clock of comparable accuracy. If we know how much of an element was present at the onset of time, we can calculate very precisely how long ago it was created.

Intelligently Designed Batteries
Matter is designed from combinations of chemical elements, and each element is intelligently designed from combinations of subatomic particles including protons and neutrons. At Creation’s “big bang” God created 5 basic elements (mostly hydrogen and helium, with little bits of lithium, beryllium, boron). From these building blocks he designed nuclear furnaces of stars to create the other chemicals necessary for life, such as carbon, nitrogen, oxygen, phosphorous, potassium, calcium, and iron. And during the first nine billion years of the universe, three generations of stars formed, burned, exploded, scattering the needed new elements into the ever-expanding universe. So when our sun and its planets coalesced about 4.6 billion years ago, we had the chemicals on earth necessary for life as we know it.

But earth was not to be a dead planet; it needed an electromagnetic field, and creation of earth required plate tectonics to move the continents about and create the volcanos needed to make fertile soils for earth. The batteries for these activity are the radioactive heavy elements such as uranium-238 created by exploding supernovae.

Radioactive Clocks
The radioactive decay of these unstable heavy metals not only gives off energy to run earth; it also allows these metals to be used as clocks of deep time. These large but unstable isotopes of uranium have excess neutrons to give off, and in breaking down they give off energy that drives the vital processes on earth. Any rock with uranium-238 at its formation will give off “radiation” or energy as it loses its extra, unstable neutrons. It takes a long time, 4.468 billion years to be exact, for half of a given amount of uranium-238 to lose all its extra neutrons and turn into lead. But when the rate of decay is known you can know when that rock was formed. Radiation is not changed by heat, pressure, chemical environment, magnetic or electrical fields. So if you start with a pile of uranium-238 and find now a given amount of lead right next to it, you can time how long it has been since that item was formed, based on the fixed decay rate.

Different rates of decay = Different clocks
Since 1905, scientists have worked on improving the technical ability to measure atoms and their isotopes. Experiments and experience have shown that using the mass spectrometer can separate the different isotopes found in a material. Useful clocks have been found with uranium-235 that decays to lead-207, with a half-life of about 700 million years. For longer times uranium-238 decays to lead 206 with a half-life of 4.5 billion years.

A rare isotope of potassium, called potassium-40, is radioactive and often found in volcanic rocks and ash. It decays to half in 1.25 million years into argon-40. The argon at the time of formation of the lava rock is boiled off by the heat of the lava, so after it cools, any trapped argon next to the remaining potassium-40 gives another clock to tell the age of the volcanic rock and ash. 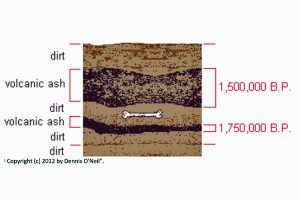 Fossils found above one layer of volcanic ash dated by potassium-40/argon-40 and below a younger layer of ash also dated, can with reasonable certainty be dated in a range between one older date and one younger date.

Even more rapid decay comes from carbon-14, a rare radioactive form of carbon found in the atmosphere. When a living plant incorporates carbon during its life, most is stable carbon-12 or carbon-13, but a small amount is carbon-14, which will decay to half its mass in 5,730 years. When a plant or animal dies its carbon isotopes are the same ratio as the atmosphere of C-12 and C-13 and C-14. However, after death the C-14, being radioactive, decays into N-14 while the C-12 and C-13 do not decay, as they are stable. If the ratio of radioactive C-14 to stable C-12 is the same as in the atmosphere, the plant or animal that ate the plant died yesterday. But over the next 40,000 years or so, you can estimate the time since its death by the decreasing amounts of remaining C-14 to the stable carbon.

Criticism of early errors
Unlike molten lava and metamorphic rocks, ancient plant and animal material is porous and more subject to contamination. Samples found near the Autobahn freeways in Germany were found to have dates that were too old due to contamination from vehicles’ exhaust. Tobacco smoke or oily hands of scientists also introduced errors in early days. But all these and other potential sources of error are now well understood. To criticize carbon-14 as inaccurate because of errors made in the early years would like be refusing to ride in a 2016 Mercedes because Henry Ford’s Model-A had some safety problems!

Overlapping clocks check one another
As we introduced this topic, having multiple clocks increases our chance of knowing the right time. If several separate clocks agree on the age of an artifact, then our chance of being correct is increased. In addition to those radioactive clocks mentioned above there is Electron Spin Resonance, Thermoluminescence Dating, Fission Track Dating for glass-like minerals, Uranium/Thorium Dating, Oxidizable Carbon Ratio, Varve Analysis, and Obsidian Hydration Dating. Each technique has strengths, weaknesses, and range of time it can estimate, but the agreement of several methods on the same samples gives independent support to the validity of the age of the specimen.

Nature’s clocks have a message for us. Are we willing to hear it?

(This is the fourth in a series of five articles on how we can know the age of the earth and the creation of life on earth. Next comes the concluding article:  NATURAL CLOCKS, Part 5, Clock Deniers)

“Faith must go beyond Reason, but never against Reason.” Pastor Gregory A. Boyd
FOOTNOTES:
Illustration with permission of Dennis O’Neil, Copyright (c) 2012 by Dennis O’Neil”

COMMENTS ON THESE ARTICLES WILL BE OPENED WITH THE LAST OF THE SERIES. PLEASE WRITE DOWN YOUR COMMENTS NOW AND SHARE THEM WITH US AFTER THE SERIES IS CONCLUDED.

In Venezuela, More Than 4,000 People Baptized Earthquake in Ecuador Kills More Than 400, Injures More Than 2,500