Dan Jackson began the afternoon session with a plea that we invite the power and presence of God, so that we can we can have peaceful relationships with our fellow divisions.

Two items were discussed this afternoon. The first was a statement that was adopted and voted at the 2018 NAD ExCom. 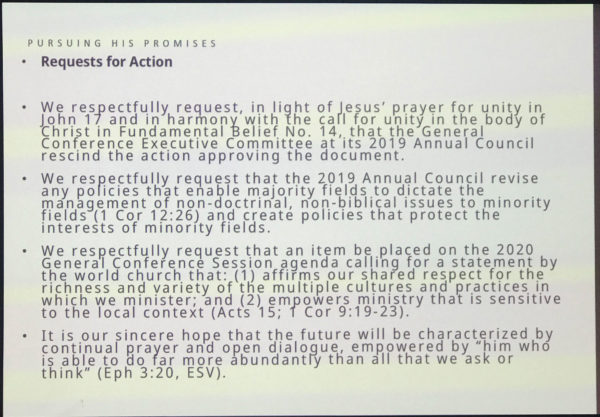 Dan Jackson explained that these three requests were presented to the General Conference (GC) leaders. The answers to the three questions were as follows:

Of the last, he observed that we, too, need to be more culturally sensitive, to listen to the language of other cultures and study diversity so we know how to approach issues.

There was quite a lot of discussion on this issue. Most people were puzzled about how the General Conference could just say, “No, we’re not going to accept that motion,” from a major governing body of the world church.

The other question on which quite a lot of time was spent was, “What was the meaning of the warning vote at the GC Excom? Elder Jackson explained that it was the first of a three-step process. First comes a warning, second a reprimand of the union conference’s leader, and third expulsion of the leader from the GC Excom. (Someone observed that when Elder Wilson was asked at the meeting about section B95 of the GC policy, which speaks of the discontinuation of organizations by voluntary or involuntary dissolution, he said, “I guess that would be the fourth step.” This does seem to say that he is thinking in terms of dissolving disobedient unions.)

Comments on the matter by Elder Jackson:

“I will say this plainly: we respect and love the leaders of the Columbia and Pacific unions and their memberships. They are in good standing in the North American Division (NAD) and will continue to be so, unless they start worshiping on Sunday. But they’re as accepted as any other union, loved as every union is. In the NAD, we have no way to relate to the warning idea, nor will we.” “I will never refer to those constituencies as rebels.”

“An attempt to explain on my part is in no way a coalescing of the philosophy behind the document. We want to be respectful; we want to do our best to explain why we think these things happened, but that is not the way we would do things.”

“Elder Wilson doesn’t think he could get a two-thirds majority to expel erring union conference leaders. He’s said that. My sincere hope and prayer is that the brethren will say, We’ve had enough. Let’s move on. There will be differences, sincere and honorable votes taken by constituencies. Let’s move on.”

“It would be wise for them to say, ‘Let’s pull the world church together, let’s quit this business.’ In the grand scheme of things we have to recognize that Jesus is coming. While people are dying around the world, we’re fighting about this? This is becoming a colossal waste of time and energy. I am not advocating for or against women’s ordination in saying that. I’m just saying, it’s time to move on.”

“My prayer would be on the other side of the GC session we would never see this thing again.”

“We have never grown up. We must talk to one another as equals. The mentality that all too often demonstrates itself in the church is that I can’t talk to you. As my dear mother used to say ‘We’re both doing the Lord’s work, you in your way, and I in His.’”

Is More Prayer What We Need?

It shouldn’t surprise us that in a group like this, the answer to many questions was “We need to pray more.” Pray that God will guide us. That God would direct these affairs. That God will bless the best interests of NAD and the world church.

It’s an idea that appeals to me, except that I keep wondering: if prayer is the main thing, why didn’t God prevent all of this in the first place when in 2010 we prayed for a GC president who would bring peace to our denomination?

You will recall that last year the NAD ExCom voted to move to tithe parity immediately—that is, to go from the roughly 6% of tithe that the NAD pays to the GC, to the 2% that the rest of the world’s divisions remit. At last month’s GC ExComm, the GC made a counter-offer that looks like this: 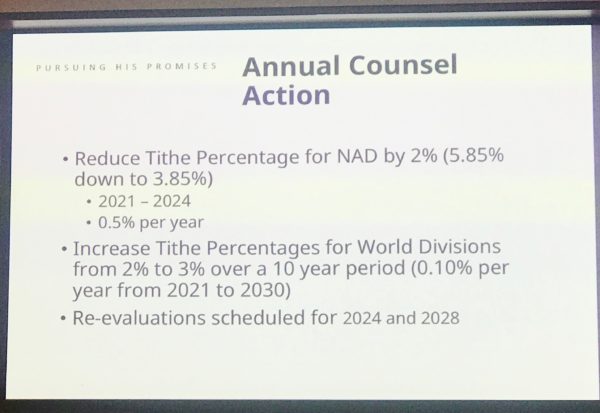 As you can see, it gets all the divisions to parity at about 3% of tithe remitted to the GC over 10 years. (The additional .85% you see there has to do with an adjustment for two major, high-profile GC-operated schools in the NAD: Loma Linda University and the SDA Theological Seminary at Andrews University.)

Elder Juan Prestol made the same speech he made at the GC Excom meeting. He said this is necessary, but it is going to destabilize the GC because income will be based on less stable currencies. It will be necessary to reduce the footprint of the GC. (That’s something a lot of people would prefer.) It’s going to be done conservatively and gradually and in a way that is easy to explain to people.

Elder Prestol said again that “both for you and for us this is a search for identity.” For the GC, seeing the NAD functioning as a separate body is like a father who doesn’t know how to live a normal life without his child in the house.

Before you think this matter is entirely settled, let me remind you that there are still negotiations going on. The following slide tells some of the items that are still to be decided, and some of them are going to mean that the money the NAD gets handed in this change in tithe may actually be withdrawn with the other hand. 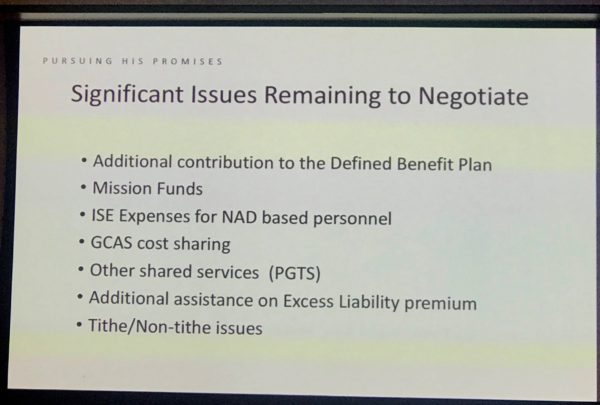 So, assuming there is some extra money left over after all the negotiations, where is it going to go? First, it’s only a few percentage points. And second, that’ll be up to conferences: a voted action last year said that the total amount of funding that returns to us will be reverted to the local conferences.

Elder Prestol finished with this eschatological assessment of church finances: “The greatest manifestation of growth will take place when we no longer have money. We won’t be able to sell or buy. And when we have no more ability to buy or sell, that’s when the work will be finished. At the conclusion of this drama, money isn’t going to be an issue.”

Dan Jackson’s assessment was rooted a bit more in the present. “The next step will be for the NAD to redefine how we deliver ministry. To think there will not be cuts or rearrangements of how we do ministry in the NAD would be to misgauge the future.”