My Take: On Counting Members 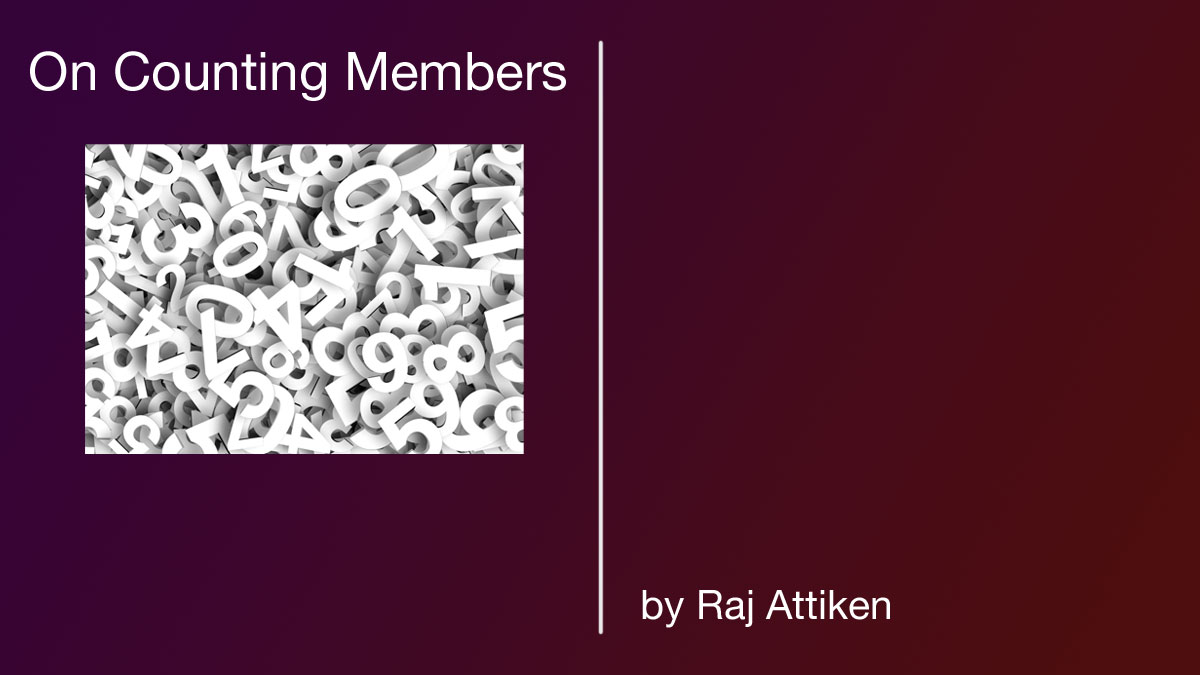 There are a number of things to be celebrated about this important mile marker in our history. Twenty million is no small number by any reckoning for a movement that had meager beginnings a century and a half ago. If Seventh-day Adventism were a country, it would now be larger than over 170 of the 233 countries in the world listed by the United Nations! The church’s growth could be a testament to its persistence to keep mission and church growth at the forefront of its ministry agenda. It is also impressive that an organization with 20 million adherents from multiple cultures, ethnicities, languages, and countries is able to maintain some semblance of global coherence.

The church is defined by more than the size of its membership or its rate of growth.

The publicized membership gains also offer us a chance to reflect on some other perspectives regarding the church’s growth. While 20 million is a large number, it is also comparatively a very small number – representing less than 0.3 percent of the world population. Any eschatological views that we hold about our distinct role in global affairs need to be tempered by this statistical reality.

Should the growth in membership to 20 million be seen as validation of the effectiveness of our methods of outreach? In reality, our growth may have far less to do with Total Member Involvement (TMI) or any other program devised in Silver Spring or other denominational office, and more to an organic movement within all of Christianity in Africa, Latin America and Asia. Philip Jenkins, Baylor University professor and renowned author of The Next Christendom, The New Faces of Christianity, and other books on the contemporary trajectory of religion, has documented his research showing the recent explosive growth of Protestantism and Catholicism alike in these regions. In an article in the March 2017 issue of The Christian Century, Professor Jenkins claims that just since 1980 the total number of African Catholics has grown by 238 percent. The phenomenal growth has been similar among Protestant denominations and churches. The Adventist Church is also a very likely beneficiary of this wave of growth.

Adventists have generally been loath to acknowledge how general trends in society and in culture play out in our collective experience. We would rather see ourselves as unique and distinctive than to admit that we, too, are carried by the waves that shape the religious and Christian world around us. We should at least be open to the probability that our current membership growth is due to factors larger than the effectiveness of programs that we have designed and implemented. We might then be far less critical of those parts of the world where factors do not exist that are naturally conducive to the growth of the church

The 20 million-member achievement highlights two other important realities. The first is that the “evangel” (“good news”) has within itself a generative power that catalyzes growth. The good news has within it the propagative vitality to spread its appeal and influence through the agency of the Holy Spirit. Its growth is mysterious. We cannot count or measure this growth. It is as much a mystery as is the growth of a mustard seed into a tree (Matthew 13:33); it is as mysterious as yeast permeating the dough (Matthew 13:38). “The wind blows wherever it wants,” declared Jesus. “Just as you can hear the wind but can’t tell where it comes from or where it is going, so you can’t explain how people are born of the Spirit” (John 3:8).

Christians are entrusted with the privilege of bearing witness to the good news about Jesus through our lives, words, and actions. This good news, however, is not about a church. It is not about an elaborate body of beliefs or an organizational system. The good news is about a Person: Jesus. Measuring the effectiveness of our witness to this good news is like measuring ripples in a pond – they largely defy measurement. It might even be true that we would change what we try to measure by measuring it. The more metrics we use, the more great truths about the nature of God’s Kingdom that slip through our fingers. “The Kingdom of God can’t be detected by visible signs,” Jesus declared (Luke 17:20).

The second reality is that the goal of what we call evangelism has largely been to expand the church’s membership roster. While the term “evangelist” appears three times in the New Testament (Acts 21:8, Ephesians 4:11, and 2 Timothy 4:5), the precise role of the evangelist is nowhere described in the Bible. The nature of this role can only be surmised from the meaning of the term “evangel” – “good news” or “good tidings.” Those who bore the designation of “evangelist” were likely those who were ambassadors of the Jesus story. It appears that over time Christians reconfigured the good news into an “ism,” (as in “evangel-ism”) and, as in the case of Adventism, understood it to mean the act of increasing the church’s membership. In many places within Adventism, the “good news” has thus become news about the church and its body of beliefs – sometimes devoid of the actual good news about Jesus.

Growing and enlarging the faith community through membership recruitment is a legitimate endeavor, especially if one views the church as an organization. In order to be sustainable, the church needs to grow. The organization, with all of its current trappings, needs people to fund its operations, manage its functions, and do its work. It needs people to maintain its structures, operate its institutions, and perpetuate its rituals. It needs more people to tell its story.

However, the church is defined by more than the size of its membership or its rate of growth. Its health and vitality involve more than its numerical growth. The sense of the Sacred among us, the quality of our relationships, the strength of people’s faith, the depth of our assurance that God loves us and accepts us and is with us, the moral and ethical values we display, the vibrancy of our communal gatherings, the nature of our usefulness to our society, the safety and acceptance we enjoy within the Body, are all factors that characterize a flourishing church. Efforts at counting only parts of these, and that are blind to the other more important features of the church, can get us only so far. As an old Scottish proverb states it, “You don’t make sheep any fatter by weighing them.”

We are in a world obsessed with numbers. The whole Western culture is geared to measuring. Numbers seem to rule the universe, where counting is an expression of power. Counting also creates a certain paradox: if we don’t count something it can get ignored; if we do count it, it can get perverted. While numbers help us understand trends and accomplishments, decisions with numbers can be something like painting by numbers—they don’t make for great art. What really matters cannot always be counted. Numbers cannot capture the sheer complexity, richness and mystery of the Body of Christ. What God is doing in the world defies statistics and numbers. That’s my take!