by Loren Seibold, November 13, 2015. I told you in a previous column that the most interesting item on the NAD Year-end Meeting agenda was the report of the Church Governance Committee. Within the document were some exciting and courageous proposals—but presenters dropped cautionary warnings. NAD president Dan Jackson said repeatedly that this is just a study document, and nothing here was about to be acted upon. I understand his caution: imagine if the word got out that the NAD was about to do away with your local conference.

I often hear critics say that church leaders find it difficult to make necessary cuts to this top-heavy system because they’re concerned about their own jobs. I don’t think that’s the reason. The denomination rarely needs to fire anyone. They can usually reduce staffing by normal attrition. And there’s plenty of attrition coming up: according to one of the reports at the meeting, 50 percent of NAD pastors (by which they mean not only pastors in churches, but also those in offices, who are still considered pastors even if they’ve not served a parish in 30 years) are due to retire within 10 years.

If you think only pastors are invested in our pyramid of offices full of suited clergy, you’re mistaken. I was in Mid-America back when the first round of conference consolidations happened, and it wasn’t the pastors and administrators, but the lay people who came unglued. I’ll never forget one man fuming, “We bought that truck for South Dakota Conference, and I’ll be damned if they’ll take it up to North Dakota!” Combining conferences may sound simple, but it won’t be. This current Governance Com 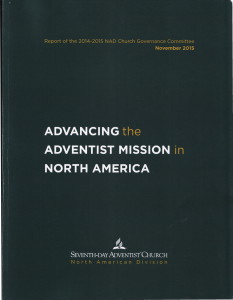 mittee did amazing work, but if you think everyone—perhaps anyone—is going to say, “This makes perfect sense. We’ll save $145,000,000 a year. Let’s do it!,” well, you’ve not been around this denomination very long.

According to the 110-page report, the first of the committee’s “driving ideas” is that “the way we do business as a church organization must reflect our mission in contemporary terms, with a vibrant, adaptable model for empowering discipleship.” When have we said anything different? No one who’s worked in this system has thought, “This won’t help the work, but we’re going to do it anyway.” Of course, we justify the way we organize. If for no other reason, it has helped us keep control of the three Ms: mission, message, and money.

And control is a legitimate concern. Denominational leaders from the very beginning intuited, I think, that a group as out-of-the-mainstream as ours is, is vulnerable to reputation-damaging fanaticism. A congregational system works best with a dispassionate, middle-of-the-road mentality. Not so well with a message that has so many opportunities for extremism built into it. We’ve seen that demonstrated throughout our history.

The second driving idea is “that because mission happens at the local-church level, we must find ways to better facilitate local ministry, with clear levels of accountability and efficiency rather than top down approach.” I’ve heard that all my life, too. Especially from people in offices. “You pastors are the most important people in the church,” they say. “The front line.” Then how come so many of you don’t want to be with us on the front line? Why do you want to direct our work from an office, between your committee meetings and travel? One of the big problems, I think, is that we’ve set up a system where to be recognized for achievement in ministry, you have to leave it.

No, there are reasons why we’ve kept our system like this, some of which we’re only dimly aware. Which is why this report is a long, long way from implementation.

The committee (as all committees nowadays must) began with surveys. Listening to that part of the presentation, I concluded (along with the report) that “the survey process didn’t uncover any radical new information.” In summary: most everyone thinks there are too many offices, too many people in them, duplication of effort and useless expenditure.

One interesting opinion, which I couldn’t find in the survey, but the report authors seemed to: They thought it “revealed a strong concern that the organization may have been lax in taking corrective actions to address various declining situations.” What does that mean, you ask? Read down, and you’ll discover that one of their concerns is small churches, where “there is an obvious drain on available resources and no seemingly clear plan for reversing the situation.” I’ve written often about the decline in small churches in our denomination, and the seeming disinterest in them. I’ve long believed that the church administrators who sit in our offices and on our committees have forgotten that these small churches exist. I was wrong. They do know they exist, and here they’re floating the idea that we stop supporting them, and put “available resources into ministries or programs that hold the greater promise.” So more money would be spent at Spencerville, Kettering, and Loma Linda, which makes perfect sense as a capitalistic endeavor—the big churches give most of that tithe money, after all, and they’ll probably have more success with it.

Unfortunately, though for understandable reasons, the denominational leadership doesn’t have much appreciation for these faithful, lonely outposts. Remember that the argument for managing the money from the conference storehouse (a concept which this report strongly affirms) has been the ability to move resources from where they are to where they’re needed. It that doesn’t happen, I wonder if church members might begin to question why they send their tithe to the storehouse at all.

You can sum up the two goals of the report quite simply: streamline the bureaucracy, and redistribute the money saved down to front-line ministries. Virtually everyone liked these ideas in principle, and thought the rest of the church should do precisely that. But, naturally, there were doubts expressed from the microphone about whether it would work in our particular case.

As for the restructuring part, the most ambitious plan is to do away with the conferences and administer pastors and churches from the Union Conference office—an option allowed in our polity, and in use in Europe. That’s the scenario that would save $145,000,000 each year. There’s an intermediate plan to combine some conferences and save about half that, and a modest list of possible economies without closing any offices.

But these are paper numbers. Estimates. What would actually result, we don’t know. My fear is that the fuss attending such big changes would be so great—angry constituency meetings, territorial fights, some leaders aligning their followers against others—that it would inflame feelings, polarize opinion, and do more damage than it’s worth. You’d think that everyone would be anxious to put more money to work in front-line ministries. But you might be surprised. You might see that the lay people are surprisingly defensive of our institutions, perhaps more than they are of their local congregation. Imagine the outcry if consolidation means selling a favorite camp or choosing another boarding school for the territory instead of yours.

The surveys (compared to similar surveys done in the mid-1990s) made the committee feel that the mood had evolved in the direction of significant structural change. I hope they’re right. But as long as we overvalue these offices, as long as they seem like the easiest way to address problems, we’re going to keep doing things as we have been.

An example: a friend told me about a GC committee he was on whose members felt there wasn’t a clear enough understanding of stewardship in the church. So they allocated hundreds of thousands of dollars so that every division could have a stewardship director. He asked them, “And when every division has a stewardship director, then what? Do you have any evidence that a man in an office in St. Albans, UK [headquarters for the Trans-European Division] is going to make stewardship better in, say, Reykjavik?” No, they admitted. But money was what they had to work with, and so they went ahead with it.

So we stick a man in an office three flights up from where the problem is. He’ll print a few pamphlets and bookmarks and bulletin inserts and mail them out, do some spots on DVD that will be sent to all the churches (which most won’t play), preach at some camp meetings, authorize a stewardship Sabbath with a ready-to-use sermon, and somehow things will change. Or not. We’ll never know, because we rarely check to see if our man-in-an-office made a difference.

There’s a simpler explanation for why this organizational sprawl has happened to us: our church judicatories grow because they can. They receive the church’s money, and budget it where they want it to be. And those percentages have been quite generous. Until they don’t have that flexibility there will be little incentive to control administrative costs. With the best of intentions they’ll cut back, but after awhile administration costs will creep back up again.

The closest thing to a conclusion was a list called “Consensus and Commitments.” It’s six carefully-worded recommendations, none of which goes too far out on a limb, surely not as adventurous as some of the ideas in the document. I’ll attach the recommendations here, for you to read. In the end, the vote was to pass it all on to another committee. I’m praying for the best, but my expectations aren’t high.

Video: Paul Richardson on Church Attendance and Community What Kind of Seventh-day Adventist Are You?