March 21, 2016:    “Over eight million Adventist Millennials took the church to the streets to occupy their communities with goodness … to lend aid to the needy [and] give genuine attention to those in the margin,” wrote Dr. Allan Martin in his summary of Global Youth Day. He is pastor of the Younger Generation congregation at the Arlington Seventh-day Adventist Church in the suburbs of Dallas, Texas, and convener of the Facebook group for Adventist youth and young adult ministry professionals.

The denomination’s official Web site for Global Youth Day included reports of nearly 10,000 projects on a map of the world. Each report included video or digital photos from a local participant or reporter. A total of 73 percent of these reports came from Latin America and the Caribbean, with two to seven percent each from Africa, Asia, Europe, North America and the Pacific.

Many of the projects included demonstrations with parades of young people carrying signs. “Their placards stated their adamant sentiments about compassion and their intent to ‘be the sermon,'” Martin wrote. “Their actions validated their determination to be agents of grace and kindness.”

The projects included feeding the homeless, working with children from poor families, sharing appreciation with law enforcement and local civic leaders, donating blood and many other kinds of activities. The denomination’s television Hope Channel broadcast reports throughout the day on Sabbath.

In Oslo (Norway), Adventist young people teamed up with the Red Cross to recruit volunteers to help welcome refugees and immigrants. In Plymouth (England), the youth group and the church school worked together to present an Easter service in church in the morning and then, after lunch, went on a nature walk in Jennycliff preserve to clean up trash along the footpaths, beaches and parking lots, equipped with litter pickers and plastic bags.

In Malawi, Radio Malawi 24 reported that Adventist youth conducted a blood donation drive with the appreciation of Wamale Muyaba, senior public health nursing officer for Lilongwe municipality because “most of the time their blood in is infection free unlike other people.” Pastor Kelvin Buya, associate youth director for the denomination’s Central Malawi Conference, urged young people to get HIV testing so they could donate blood. Adventist youth also planted trees and picked refuse in public markets in villages. 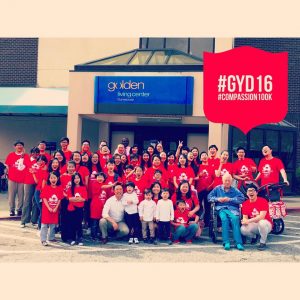 Groups of students and other young people from Newbold College in England visited residents of Birdsgove Nursing Home, sang in Princess Square in the nearby town of Bracknell, and helped with community gardens at Jealotts Hill Community Landshare. One group traveled to Newmarket-on-Fergus in County Cork, Ireland, to help with a new congregation getting started there, according to a news bulletin from the denomination’s British Union Conference.

“As Christ shed his blood to save us, so are we called on this day of service to also donate blood to save a life,” Pastor Alfred Asiem, youth director of the denomination’s South Ghana Union Conference, was quoted by the Ghana News Association in media across the country. Adventist youth marched on several main streets in Accra, the capital of Ghana, and organized a blood drive at Borstal Institute, the news service reported. In Ghana the World Youth Day projects also launched a Youth Week of Prayer extending this week to Easter.

Some 300 Adventist young people in Belgium participated in 60 projects just two days before the tragic, senseless killings by terrorists in Brussels, the nation’s capital city and headquarters for the European Union of countries (EU) as well as the North Atlantic Treaty Organization (NATO). In Denmark, youth from the Aalborg Adventist Church made waffles for and played with the children at a refugee center. In Finland, a group of Adventist youth dressed as beggars on the street, “but instead of asking for money, they offered one Euro to each passerby who was willing to share their story,” reported a news bulletin from the denomination’s Trans-European Division (TED).

Pastor Sam Gungaloo teamed up with Keryhs Sterling, a young adult from Aylesbury, a suburb west of London, to provide live coverage of Global Youth Day on the Internet for 24 hours. For Sterling’s final report on Facebook she wrote; “Another fantastic Global Youth Day is complete, and what an incredible and inspiring experience it was! Spent with the greatest of people! Continue to go out there and make a difference in your communities. [It] isn’t just a day, it’s a lifestyle!”