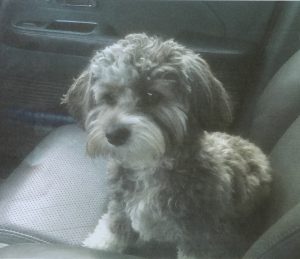 C and M are neighbors of a friend in a small gated coastal community.  C is a healthcare professional, M an airline pilot.  Shortly after marrying, they acquired Lola, a small bichon frisé-poodle mix (colloquially known as a Bichpoo or Poochon).  Lola is five and weighs 15 pounds.  She has a sweet temperament and is well known in the complex.  Her owners walk her at least twice daily and often play with her in their grassy front yard.

One night, C swung by my friend’s house for a brief meeting regarding a forthcoming neighborhood block party.  Lola followed her.

About a half hour later, C returned home to find M asleep on a couch; he had just returned from a long overseas flight and not slept in 27 hours.  Lola was nowhere to be found.

Along with a few neighbors, C and now-fully-awake M searched the environs.  Time was short; dusk was transitioning into night.

Their quest for Lola continued the next morning.  As the day wore on, they heard stories of coyote sightings.  Given Lola’s size, their apprehension mounted.  Neighbors came together and mobilized, searching, posting signs, calling and visiting nearby shelters, businesses, and veterinary hospitals.  Postings were made on Facebook, Twitter, and other social media.  A reward was offered.

By the following day, discouragement had, like a thick coastal fog, enveloped the little community.  There seemed little reason to hope.

During this time, my friend, her visiting mother, and her son had prayed, petitioning God to please bring Lola home.  My friend was convinced Lola was gone for good.  She reasoned that, given Lola’s sweet, affectionate nature, anyone who found her would consider keeping her.  The coyotes?  Not so much.

Then, almost two days after her disappearance, C’s doorbell rang.  At the door stood a lady, holding Lola.

C thought she was dreaming.  She stood as if paralyzed at the portal.  So taken aback was she that, for a few moments, she could neither move nor speak.

The lady said that she was the daughter of a resident of the little community and was at the local neighborhood park the night Lola disappeared, when she spied Lola.  Unsure what to do (Lola’s tiny collar contained faux gemstones but nothing more – no name or ID), she took the dog to her apartment, and subsequently considered keeping her as a pet.

A couple days later the woman came to visit her parents in the gated complex and saw the flyers about missing Lola posted to trees and gates.  Now she knew the truth; Lola was no stray.

One could take the position, of course, that Lola’s return was sheer happenstance, a matter of random good luck.  Nothing more.

You might have difficulty convincing C and M of that, however.

The prayers that ascended heavenward were now thanks to the Almighty for watching over all His creatures and answering the supplications of some.