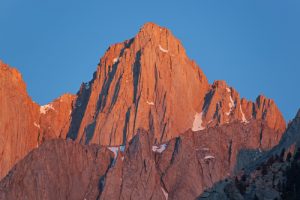 One of the things I had wanted to do for a long time is climb Mt. Whitney.  I have passed through the town of Lone Pine many times, and have not infrequently looked intently westward in hope of glimpsing the 14,494 foot peak, surrounded by lesser peaks, often obscured by clouds.  The mystique of the incompletely revealed, like a scented woman beneath a veil, always lingered.

Sometimes a catalyst is needed to convert thought into action.  So one summer, in response to a similar desire voiced by a brother, the dream finally became reality.  We gathered one evening in Mammoth Lakes and mapped plans, our excitement heightened by encouragement from a relative whose aunt and uncle held the record for fastest climb of this, the highest mountain in California.

I hardly slept that night.

Early the next morning we drove to the Mt. Whitney Portal, 8371 feet above sea level.  The summit was 10.7 miles away by trail.  We planned to make the round trip by dark, an ambitious undertaking in that none of the seven of us (3 brothers, 4 nephews) was a seasoned hiker.

Outer garments were quickly shed within the first mile as the sun rose and the effort exerted in ascending the switchback trail brought forth crops of sweat.  We made periodic but brief stops to admire the receding haze-covered valley, take pictures of spectacular scenery, and replenish body fluid from numerous canteens we carried.

Sometime within the first two miles I noticed an aching in my right knee.  Soon the aching increased and the knee began to swell.  I had had episodic knee effusions in the past, usually after jogging, which I attributed to traumatic synovitis.  I hadn’t anticipated trouble with hiking and therefore didn’t bring an Ace wrap or similar elastic knee support.

I found a stick near the path, but it wasn’t nearly straight or sturdy enough.  I hobbled along, determined to keep up but drifting ever farther behind.  The left knee, which had given little trouble previously, now began to ache and swell, doubtless a consequence of favoring the opposite extremity.

A group stop in the shade for an early lunch was most welcome.

About 5 miles into the trip it became painfully obvious that not only was I not going to make it to the top, but also I was hindering the others from a pace requisite to accomplish the objective of making the round trip climb in one day.

Sadly, somewhat short of the halfway point, I turned back.

Now having plenty of time, I stopped frequently to take pictures (I had brought along a new auto-focusing camera and was eager to see the end product) and became more acutely aware of my surroundings than on the ascent, when I had concentrated on keeping up with the others.

A fallen tree, dealt a mortal blow by lightning and/or insects, lay devoid of bark and foliage, a stark contrast to the verdure of an adjacent meadow.  The chattering of inquisitive blue jays and nervous ground squirrels punctuated the gentle, constant roar of a distant waterfall.  The immensity of pristine granite walls dwarfed the occasional human, whose presence seemed almost alien in the midst of such natural grandeur.

Continuing on the downward trail, I descended into a valley designated as a campsite.  By trail’s edge stood a snow-haired lady in a bright red shirt, conversing with a young hiker.

Smiling behind glasses, she stepped forth and said, “Hello.  I’m Hulda Crooks.”  I stopped and took the proffered booklet, “A Prescription for Health.”  A slim, pocket-sized pamphlet, it detailed elements of healthful living, including exercise, good nutrition, and the like.

I was less impressed with the booklet than with her (this in no way denigrates the former).  Exuding a vitality often missing in those half her age, she looked considerably younger than her 85 years.

Her husband, Dr. Samuel Crooks, had been chairman of the anatomy department at Loma Linda University from 1945-1950.  After his death in 1950, she increased her exercise program and had climbed Mt. Whitney every year for the prior 21 years.

At age 72 she took up jogging, and at age 76 crossed the Sierra Nevada Range from Sequoia to Whitney Portal, an 80-mile trip.  Two years later she completed the 212-mile John Muir Trail.  As of August 1980, she had climbed over 60 peaks.

I took her picture before leaving, and, on the descent I read her tract.  One of the prescriptions for health was “gratitude of heart.”

Though disappointed in not being able to complete the climb, I was grateful I had had an opportunity to meet such a remarkable woman.

The others in my group successfully made the climb, but missed her.

Life has its compensations.