Lagniappe definition: A little something extra (from the French; used mainly in the South, especially around New Orleans). 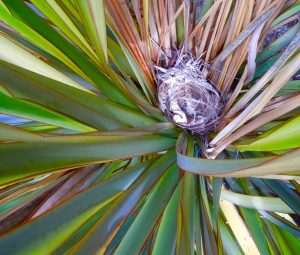 I first encountered the word ‘lagniappe’ decades ago, when listening to a medical education lecture while I commuted to and from work, over 30 miles away.  The lecturer was from Louisiana.

I almost never use it in parlance, and had almost forgotten it, till I was searching for a title for this short essay.

My landlord and I have a somewhat unusual landscape responsibility arrangement.  He takes care of the front yard, including a small lawn he mows on average once or twice a month.  To do so, he drives over 60 miles each way (which takes him over an hour).  I suspect he incurs more vehicle expense, including cost of petrol, than it would cost him to hire someone.  Not to mention his time, which has to be worth something.  No matter.  He is an attentive landlord and entitled to mow his own lawn if he so wishes.

I am responsible for the backyard, which includes a smaller isosceles triangular lawn, which I manage with an electric trimmer.  Both lawns have timed sprinklers, so my requisite maintenance more involves raking, sweeping, and tending to shrubbery, including those that regularly spill over adjoining neighbors’ walls, than grass cutting.

We had unusual weather recently.  Light but durable rain, with accompanying thunder and lightning.  Nice, in that it was cooler than normal.  The sun beat down with force, and the air was heavy as guilt.

After trimming bushes on both sides of the backyard and placing them in the large plastic bin designated for greenery, I noticed that a couple yucca in the planter above the back lawn needed attention.  Their precise name will remain innominate, for reason of the triad of three I’s (ignorance, indolence, and “I’ll look it up later” mentality).

Suffice it to say the plant is circular and has green leaves that resemble swords’ blades.  A number of blades had died and turned brown.  I decided to remove them.

Facing the back block wall, I started at the approximate 4:00 position, and worked my way around it in clockwise fashion.  Some of the leaves yielded to gentle tug; others required more force to remove.  Some loosened not at all and I snipped them.  But the ground around the base of the plant looked better.  I wondered why I had not done this sooner (I’ve lived here over three years).

When I reached 1:00, as I glanced down, I saw something surprising.  At around 2:00, deep within the plant, almost at its base, was a nest.  It was empty and wonderfully camouflaged.  I was about to remove it when I thought, why destroy with relative ease and alacrity something that had taken a couple birds much time and effort to build?  So I left it and surrounding vegetation alone and turned my attention to the other similar plant at the other end of the planter.

I didn’t expect to find another nest in this plant.  One was accidental.  Two would be—well, more than sheer coincidence.  And yet, as I moved in circular fashion around this second yucca, removing dead leaves as I went, pulling some, snipping others, I came upon another, similar nest.  At 12:00, not 2:00.  It, too, was nicely camouflaged.  And also empty (see accompanying photo).

Any doubts as to the ownership of the nests were quickly dispelled shortly thereafter when a pair of crows flew to a nearby palm tree and began cawing their displeasure.

We have our share of feathered folk.  One early morning I spied a large blue heron atop the roof of a nearby house.  It was silhouetted and so still that I wondered briefly if it might be the statue of a stork, until it flew off and I marveled at its size.  If I want to see seabirds, I have but to bike or drive to the coast, a scant three miles away.

Blackbirds, including crows (I recall a syllogism requiring deductive reasoning from some test of yore:  All blackbirds are crows; this bird is black; therefore this bird is a crow), are common.  But I’m quite sure that the cacophony of the two crows this morn was directed at me for having discovered their nests, despite being empty.

The serendipitous discovery of the nests got me to thinking.

The words of Paul in Ephesians 3:20 came to mind:  “Now unto him that is able to do exceeding abundantly above all that we ask or think…”

I’m convinced the Almighty wants good things for us.  He tells us as much (Matthew 7:11).

Whether it be answered prayer, visual or aural beauty in nature, a moving passage or piece of classical music, or the delight of finding a bird nest in an unexpected place.