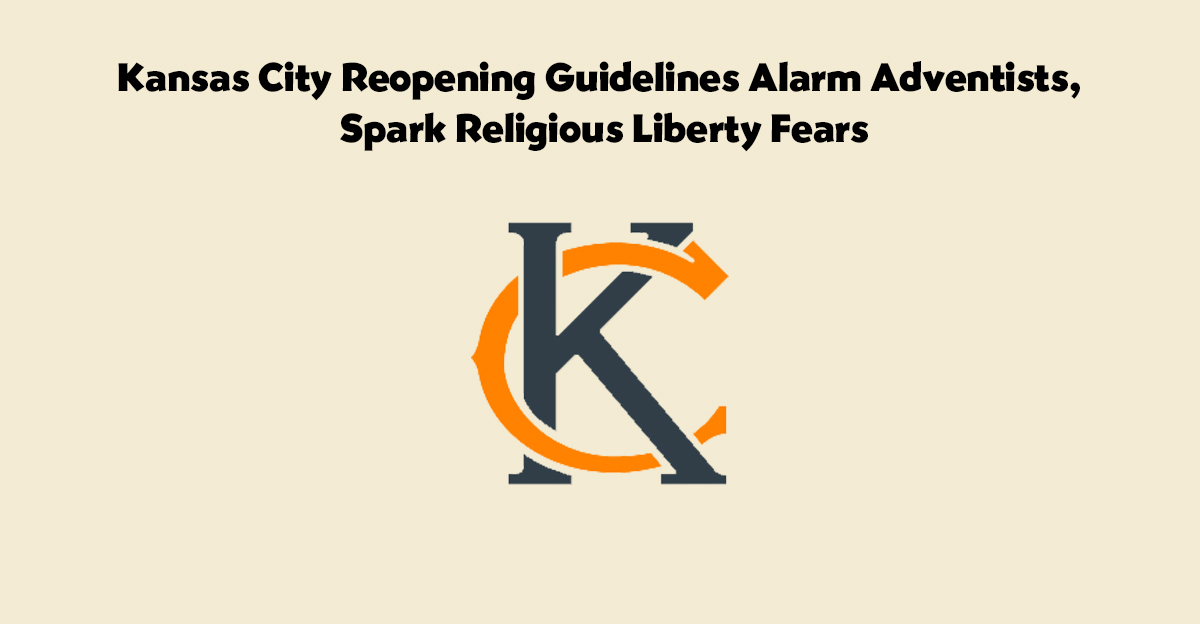 A clause in Kansas City, Missouri’s, rules for a gradual reopening after COVID-19 has alarmed Adventists and other religious liberty advocates.

In-person religious gatherings (including weddings and funerals) may resume, subject to the 10/10/10 rule (if held inside) or limited to 50 people outside, provided social distancing precautions are followed and event organizers maintain records of all attendees.

businesses must limit the number of individuals on-site (inclusive of employees and customers) to no more than 10 percent of building occupancy or 10 people (whichever is larger), and record the names, contact information, and approximate entry/exit time of all customers who are on premises for more than 10 minutes.

Seventh-day Adventists have long been predicting some kind of government interference in worship services, and a few are hailing this rule as a sign of the end times. One commenter wrote,

We’ve been told this will happen. Health rules are just an excuse to begin monitoring Sabbath-keeping. What is next after they record all our church members who attend church? All they have to do is insist that it’s safer, and can be more easily monitored, if we all only go to church on Sunday! Next comes a Sunday law, and persecution.

The new order states that by recording names and contact information, the health department will be able “to more quickly trace, test, and isolate individuals who may have been exposed to COVID-19.” Anyone who does not provide this information should be refused entrance!

The Germans did this very thing to Jews – collecting the names and locations of all known synagogue attendees – in the early days of the Nazi regime. Never in our wildest dreams could we have imagined Nazi-like measures designed to surveil, track and spy upon what was once a FREE American people. Yet that is exactly what Kansas City’s misguided government officials are now demanding.

Our President, Donald Trump, is doing his level best to bring the country out of the over-hyped, media-driven COVID panic. But some congressional and state level officials (led by Democrats) seem to be doing everything they can to thwart not only a recovery, but also the very foundations of our republic!

These attacks on our churches cannot stand. The backbone of our country relies on our constitutionally guaranteed ability to worship and serve our Lord and Savior Jesus Christ.

Staver is claiming—though this is not supported by the KCMO Reopens website—that Kansas City municipal leaders are demanding from pastors a roll of all church members, and that his organization is challenging such orders with legal action.

We have already filed suit in several states against governors who have illegally and unconstitutionally fomented the arrests of pastors and launched attacks on the liberties of congregants. We will fight these cases all the way to the Supreme Court if we must. But we need YOUR help to defend freedom.

States and municipalities have defended these strong actions as a valid response to a public health emergency. The record-keeping requirement is to allow contact tracing: in case someone present at a public gathering falls ill, those who were in attendance can be notified and seek treatment.

By recording customer names, businesses will enable the Kansas City Health Department to more quickly trace, test, and isolate individuals who may have been exposed to COVID-19 if an employee or customer had the virus at the time they frequented the business.

In this respect, churches are being treated no different than any other business where possibly infected people may come into contact with others. According to the Centers for Disease Control and Prevention (CDC), contact tracing is “a core disease control measure employed by local and state health department personnel for decades,” whose purpose is to help to help those who are sick or infectious:

Contact tracing is part of the process of supporting patients with suspected or confirmed infection. In contact tracing, public health staff work with a patient to help them recall everyone with whom they have had close contact during the timeframe while they may have been infectious. Public health staff then warn these exposed individuals (contacts) of their potential exposure as rapidly and sensitively as possible. To protect patient privacy, contacts are only informed that they may have been exposed to a patient with the infection. They are not told the identity of the patient who may have exposed them.

Between the 1880s and her death, Ellen White wrote extensively about Sunday laws aimed at Sabbath keepers, and warned that they would initially be urged for reasons other than religion:

Satan puts his interpretation upon events, and they think, as he would have them, that the calamities which fill the land are a result of Sundaybreaking. Thinking to appease the wrath of God these influential men make laws enforcing Sunday observance. 10MR 239 (1899).

This very class put forth the claim that the fast-spreading corruption is largely attributable to the desecration of the so-called “Christian sabbath” and that the enforcement of Sunday observance would greatly improve the morals of society. This claim is especially urged in America, where the doctrine of the true Sabbath has been most widely preached. GC 587 (1911).