Juniper: A Promise of Restoration

By Suzanne Ocsai, July 11, 2015:   As Jodelis Matos and Patrick Ranalla, of the duet Juniper, take the stage to perform at IMPACT San Antonio—the young adult programming during the 60th General Conference Session (GC)—their soft-spoken voices and gentle personalities welcome you as they introduce themselves and their first song. However, as soon as they begin to sing, the moment explodes like dynamite; they are, simply, powerful. 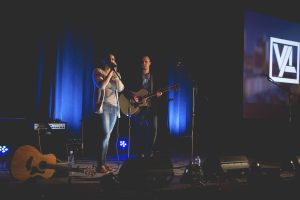 With intense emotion and passion, their voices carry throughout the hall, eyes closed and hands lifted high, you’re carried along with them on a river of commanding praise.

The kind of emotion and passion Juniper sings with is the kind that is earned only from knowing personally the suffering a soul endures through long dark nights while waiting desperately for morning’s first glimpses of restoring light. And theirs is just that—a story of restoration and redemption.

“For a long time I was really numb and in a melodramatic phase in my spirituality and not really sure what I wanted to do,” said Patrick.

Tiffany Ranalla, Patrick’s wife, wasn’t sure what to do during this time either. She sought out pastors and others she trusted to get their advice.

“Some people encouraged me to stay,” she said, “and some people that had talked to him knew what a dark place he was in and did not think he would recover. [They] told me that if I wanted a Christian husband that they didn’t think he would be that again. So I really handed my faith over at that point and said, I’m going to continue to raise my kids, continue to go to church, and he can follow me or he can not follow me.”

While she decided to stay, the hardest thing for Tiffany to reconcile was her husband’s loss of faith in God. 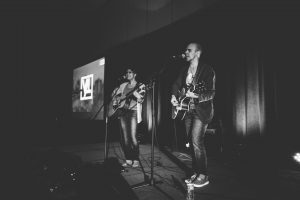 “I just continued to pray that he would come back around because it wasn’t as if he was a bad person or he changed who he was or he wasn’t a good man,” she said. “It was the aspect of him just not believing anymore and having no faith left. I wanted him to come with us to heaven. And that was hard to think about the fact that if something ever happened to him that we would not see him again.”

During this time Patrick was feeling God pulling him back even when he tried to ignore the tug. It seemed like every time he would pick up his guitar to play or write a song, it was Christian music and lyrics that came to mind. He couldn’t figure out why this was happening; all he knew was that he couldn’t escape those moments.

“I would forget about what I was doing at that time,” said Patrick, “and then I would eventually stop myself, cause I’m like, ‘wait a second, this is not what I want to do.’”

At the same time Jodelis was also struggling through her own valley of shadows. “There were dark and painful times,” said Jodelis, “particularly in the last few years when I would be so broken by what I was going through—circumstances that led to [my] divorce—but my God was right there. And many times in that brokenness He gave me a song and with that song He would give me exactly what I needed in that moment.”

She started writing down the songs as well as performing at church and various events. The music became her healing. After a performance one day, Tiffany walked up to her and said, “You need to sing with my husband.”

That was the beginning of Juniper.

Just as their own personal lives went through intense ups and downs, their music ministry did as well. Tiffany, who has since become Juniper’s manager, and Jodelis could sense Patrick’s resistance to the idea of committing to the group.

But little by little, Patrick began coming back. Tiffany saw the prayers for her husband being answered with every venue he performed. One day Tiffany drove over to Jodelis’s house and shared with her just how much Juniper meant to them. 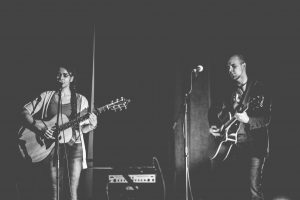 “We’ve decided to put school to the side,” said Tiffany. “I can see that [Juniper] is good because it brought my husband back to me.”

For Juniper, being invited to perform at the GC was simply one more in a long stream of affirmations from God to the promise of restoration He’s bringing to their own lives and the lives of others through their music.

“For me, Juniper definitely restored my faith,” said Patrick. “Just because of where I came from . . . it had been a while [since] I had been truly faithful, truly open to the promises of God. Because I wasn’t looking to make a big difference and shoot here to today, San Antonio, Impact, 2015, it’s just like this is what we’ve been called to do. It is purposeful and my faith is stronger than ever.”